CLUB HISTORY
Galway United F.C. was founded as Galway Rovers in the Claddagh district of Galway in 1937. The club achieved great success at junior level and had their first shot at senior football when they competed in the FAI League Cup in 1976. In 1977, the club was invited to join the then League of Ireland, making its debut in Terryland Park against St. Patrick’s Athletic on the 28th August of that year. The club found it difficult to make an impact in the League Of Ireland at first, but gradually improved and reached its first major final in 1981, losing the League Cup final on penalties to Dundalk, in Oriel Park. It was then decided to change the name of the club to Galway United.

Success was soon to follow. United finished in sixth position in the league in 1985, and under the stewardship of Tom Lally and Tony Mannion, qualified for the FAI Cup final. Shamrock Rovers were the victors in a Dalymount Park on 28th April 1985 as a Noel Larkin scored the only goal in the 57th minute. Shamrock Rovers were also League Champions and this enabled Galway United to qualify for a historic first appearance in Europe, as we represented Ireland in the European Cup Winners Cup. The team distinguished themselves in the National Stadium in Copenhagen, when despite finishing with ten men, held Lyngby to a 1-0 victory. A packed Galway Sportsground on the 2nd October saw the Danes hold on for a 4-2 aggregate victory. Paul Murphy scored Galway United’s first goal in European competition in the 50th minute, followed by Denis Bonner in the 82nd minute.

Galway United continued their impressive form in the League and incredibly remained unbeaten until March 1986 – a club Premier Division record of 16 games. At this stage they were leading the table, ahead of the great Shamrock Rovers side of that era who went on to win four league titles in a row. On the 2nd March 1986, the two title contenders went head to head in Terryland in a match which would ultimately decide the title. Three goals in the first 35 minutes handed the game to Rovers, who went on to win the game 3-1 and also won the league. Galway United finished runners up and again qualified for Europe as Ireland’s UEFA Cup representatives. Meanwhile, on 15th January 1986, United won their first senior trophy as we beat Dundalk 2-0 in the League Cup final. Denis Bonner (brother of Packie) and Paul McGee (17 times capped for Ireland) scored the goals. Galway United’s opponents in the UEFA Cup were Gronigen, who at the time were one of the top sides in the Netherlands. They went on to win 8-2, with the home tie memorable for the fact that it was held in the Gaeltacht area of Carraroe.

Fast forward five years. May 12th 1991 will be a day forever engraved in the hearts of Galway United supporters. United had consolidated their position in the Premier Division under new manager Joey Malone. In the FAI Cup, Cobh Ramblers (3-1), Shelbourne (2-0), Limerick City (2-1) and St James Gate were eliminated as United again reached the final, this time held in Lansdowne Road. Our old rivals, Shamrock Rovers were the opposition and were seeking their 25th victory in the competition. Both sides were deadlocked at 0-0 with five minutes to go on the clock. Then a Rovers kick out found its way to the mercurial Tommy Keane, who whipped in an inch perfect cross from the corner flag. Johnny Glynn tapped the ball into the net, jumped the advertising hoardings and ran to the hundreds of United fans streaming down the terrace. The goal was enough to win Galway United the FAI Cup and also send us back into Europe. The 1991 Galway United FAI Cup Winning Team is pictured above.

United were drawn against Danish side Odense in the European Cup Winners Cup. The first leg was held in the Galway village of Ballinderreen in front of a 6,000 crowd. Odense were much too strong for United, who had lost both Keane and Glynn in the summer, and they went on to win the tie 7-0 on aggregate. The following season proved to be traumatic for the club, as we were relegated to the First Division for the first time in our history. Tony Mannion returned as manager and Galway United returned to the top flight in style, winning the First Division at the first attempt and also winning the First Division shield.

Terryland Park was being redeveloped and the club moved to Crowley Park, the home of local rugby side Galwegians, for one season. The side surpassed all expectations by finishing third in the Premier Division behind Shamrock Rovers and Cork City. Galway United returned to Terryland Park on the 9th October 1994, beating Sligo Rovers. Two weeks later a record Terryland crowd of 7,000 saw United defeat Cork City 2-1, as the floodlit football came to Galway. United remained in the Premier Division until 1996, when we were relegated under new manager Dennis Clarke. The cloud of relegation had a silver lining, however, as United won two trophies – the First Division Shield and also the League Cup, both for the second time. Cork City were beaten 3-1 in the first leg of the League Cup on December 17th 1996, and a Fergal Coleman goal in Turners Cross on New Years Day gave the club a 4-2 aggregate victory. 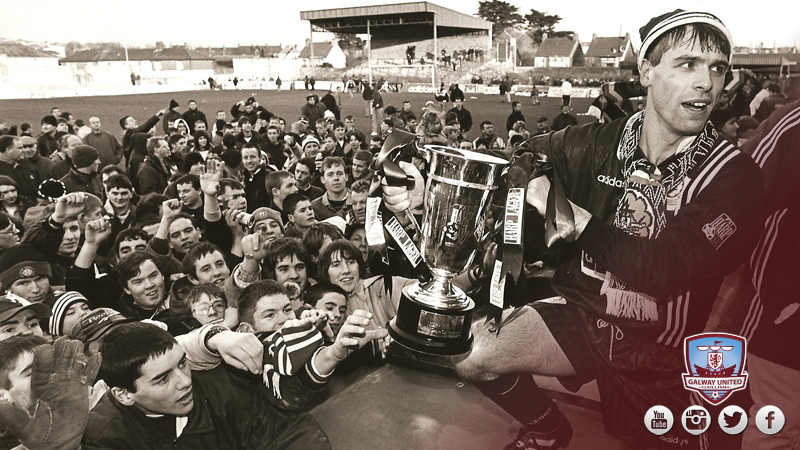 Dubliner Don O’Riordan was our next manager, and he took Galway United out of the First Division in 1999. His reign in Terryland will be remembered for two great FAI Cup campaigns, which saw the club reach the semi-finals in both 1999 and 2000. Unfortunately, the club lost both games, to Finn Harps and Shelbourne respectively. The 1999 semi-final was the first football match to be televised live from Terryland Park on national TV. The talismanic Tony Mannion returned for his third spell as manager in 2001. After twenty five years of league football and six senior trophies Galway United found themselves in the First Division for the third time at the start of the 2002 – 2003 campaign.

At the start of the 2005 season Stephen Lally took over as club manager, Stephen played for Galway United uninterrupted between 1983 and 1997. In this time, he won an FAI Cup medal, a First Division Championship medal, 2 League Cup medals, 2 Shield medals as well as being on Galway United sides that finished 2nd in the Premier Division (1986) and 3rd in the Premier Division (1994).

Stephen Lally resigned from his position ten games into the 2006 campaign. Tony Cousins was appointed manager of the club on June 14th ’06. Galway United finished 3rd in the 2006 league campaign and were invited to take part in the Premier Division of the new eircom League of Ireland for the 2007 season.

In the 2008 campaign Jeff Kenna was appointed manager early into the season and he helped Galway United keep their place in the Premier Division on the final day of the season, Kenna also guided Galway United into the Semi Final of the FAI Cup and League Cup but both games were lost against Derry City. He then took over at St. Patrick’s Athletic for the start of the 2009 season. His assistant manager Ian Foster took over the managerial role in 2009. Foster departed for Dundalk after the season ended.

Sean Connor was appointed manager in 2010, swapping positions with Ian Foster at Dundalk. In his first season, he guided the Tribesmen to safety after Galway United defeated Bray Wanderers in a Play-off. The 2011 season was the most difficult in the clubs proud history. Galway United only won one Premier Division game and finished bottom of the league. The clubs perilous financial position meant that it was not granted a licence to compete in the League of Ireland and it would be 2014 before Galway would return to the newly renamed Eamonn Deacy Park. 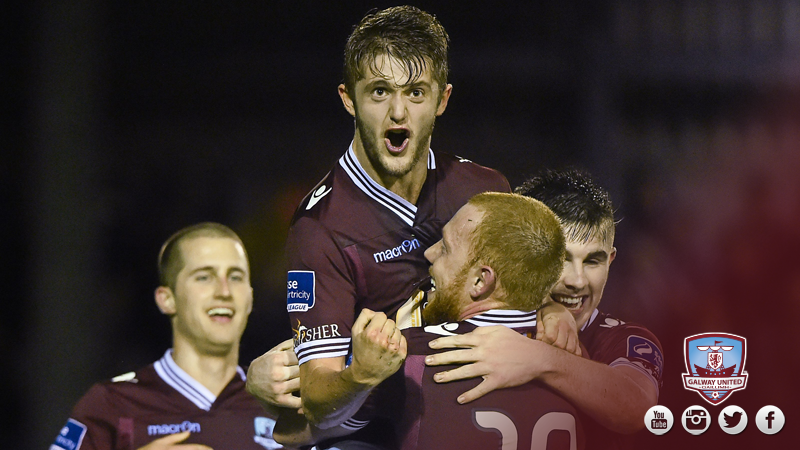 Representatives from Galway United, Salthill Devon, Mervue United and the Galway FA were brought together as directors of the club. In its first season back in the League of Ireland, the club played under the name Galway FC. Galway joined the First Division and under Tommy Dunne’s guidance, the Tribesmen won promotion through the promotion Play-off, defeating Shelbourne and UCD.

Before the start of the 2015 Premier Division season, the Galway United name returned once again after the club purchased the rights to “Galway United Football Club”. The Tribesmen finished 10th in the Premier Division whilst also reaching the League Cup final, losing to St Patrick’s Athletic on penalties at Eamonn Deacy Park after knocking out double winners Dundalk in the Semi-Final.

The start of the 2017 season saw Galway United becoming a 100% fan owned club. Shane Keegan was appointed manager but his first season at the helm ended in disappointment with the Tribesmen being relegated on the final day of the season. Keegan departed Eamonn Deacy Park midway through the 2018 First Division campaign with United out of play-off contention. Alan Murphy, who showed his managerial promise with United’s under-17 team, took charge as manager until the end of the season.