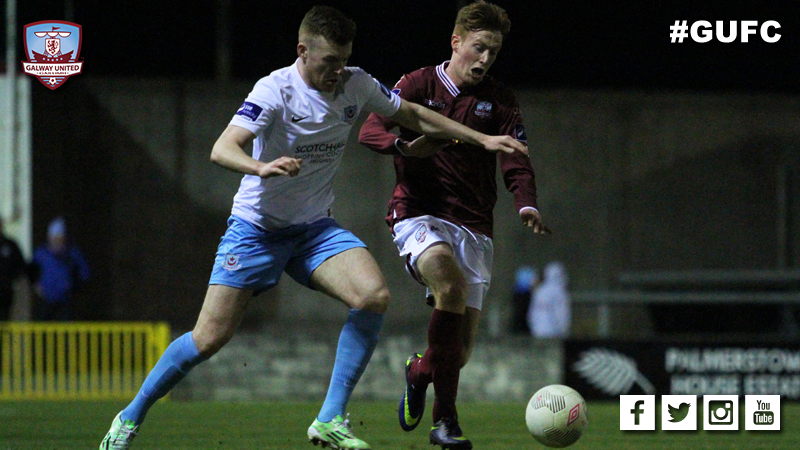 Galway United will hope to win their fourth game in a row when they travel to United Park on Friday evening to face Drogheda United. Kick-off: 7.45pm.

The Tribesmen have kept three clean sheets in their last five outings and they’ve won six of their last nine games.

Galway United came through a hectic period of games at Eamonn Deacy Park on Friday and Monday night, overcoming Bohemians in an eight-goal thriller in the league, whilst also knocking the Gypsies out of the EA SPORTS Cup quarter-final.

DUNNE “WE’VE IMPROVED IN ALL ASPECTS OF OUR GAME.”
“We’ve tried to go and attack games and be positive,” Dunne said.

“We’ve improved in all aspects of our game. Friday’s league game against Bohemians was open, Monday’s game was more cagey and measured. I was pleased with our performances in both games.

“The players pushed themselves and gave everything. I’m hoping that physically, those games didn’t take their toll on them and that we can go again and pick up another positive result at United Park.

“I wouldn’t be overly concerned (about fatigue), the players have shown that they’re well able for it. We did a recovery session and we trained as normal this week.

“Against Bohemians, we were strong against a team who are doing very well. We’re aiming to go again at United Park on Friday evening and keep our run going.”

TEAM NEWS
Kilian Cantwell returned to full training this morning after a lengthy injury lay-off with a serious knee injury. Tommy Dunne hopes he will be back in contention in the coming weeks.

Andy O’Connell has suffered a setback in his recovery from an ankle injury, he’s going for an MRI today and he will be unavailable for an indefinite period.

Sam Oji is recovering from a hip problem and he is expected to return to action next week.

Kevin Garcia was forced off with injury against Bohemians in Monday night’s EA SPORTS Cup win against the Gypsies because of a heavy knock to his knee. Garcia is also expected back next week.

A number of players have returned from periods out injured, these include: Jason Molloy, Alex Byrne, Ger Hanley, Marc Ludden and Conor Barry. All of the players have trained and are in contention for Friday’s visit to United Park.

Enda Curran (hamstring) was not risked against Bohemians on Monday night, he’s a doubt for Friday’s clash against the Boynesiders.