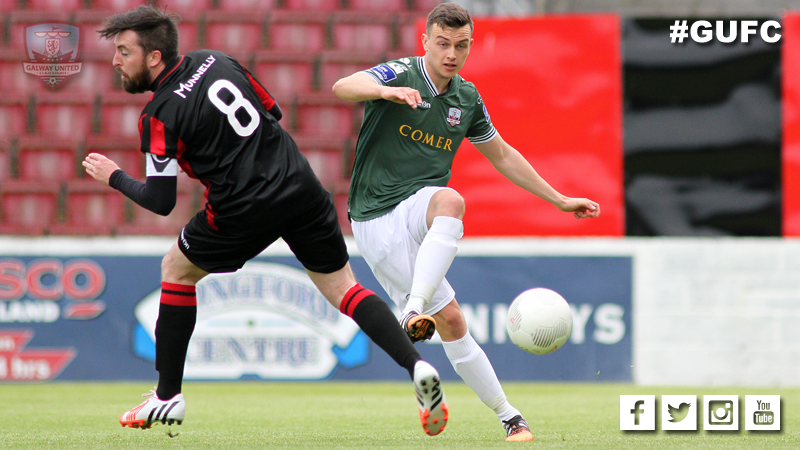 Both sides are nearer to the relegation zone than they would care to be and with the resurgence of Sligo Rovers and Limerick, a positive result for either side could be momentous.

Longford Town earned a valuable three points at home to Bray Wanderers last week, while United were undone by an opportunistic second half Billy Dennehy strike at Turners Cross.

TOMMY DUNNE: “WE HAVE TO ROLL OUR SLEEVES UP AND DIG IN AND GET SOME RESULTS.”
“It’s important that we have some options and availability again,” Dunne revealed.

“It’s a huge match for us. We’re not panicking. There is still a lot of football to be played. We’re at home, the onus will be on us to make things happen against Longford.

“Longford are also a newly promoted side, we know we have to have a real go against them. Tony Cousins has done quite well there. They’re a tough outfit to face and it’s an equally important game for them also.”

Galway United lost narrowly to Cork City at Turners Cross last week and Dunne is taking the positives from the game.

“It was a positive performance,” he explained.

“We battled from start to finish and made it difficult for Cork City. Yes they had a lot of possession in the second half but we defended doggedly. If we can marry that with a couple of goals, then we can be positive heading into the final crucial weeks of the season. They’re all big games now, we’re just anxious to get everybody healthy and available so we have the best chance.

“It’s a relief that our injury list finally seems to be shrinking, are the lads 100%? Of course not, but they’ll give us valuable experience and we’ve been missing senior players badly. We’re in a run of games now that is hugely important. We’re still in a good position and we know what we have to do.

“Getting the players back is positive and encouraging, now we have to roll our sleeves up and dig in and get some results.”

Tommy Dunne has finally received some positive squad news with the return of injured trio Marc Ludden, Ryan Connolly and Stephen Walsh. All three completed training during the week without any ill-effects and they are expected to feature in United’s matchday squad against Longford Town on Saturday.

New signing Tomi Saarelma has received clearance and he will go straight into the Tribesmens squad.

Tommy Dunne will be without the services of injured duo Padraic Cunningham (knee) and Alex Byrne (groin) for the visit of De Town.