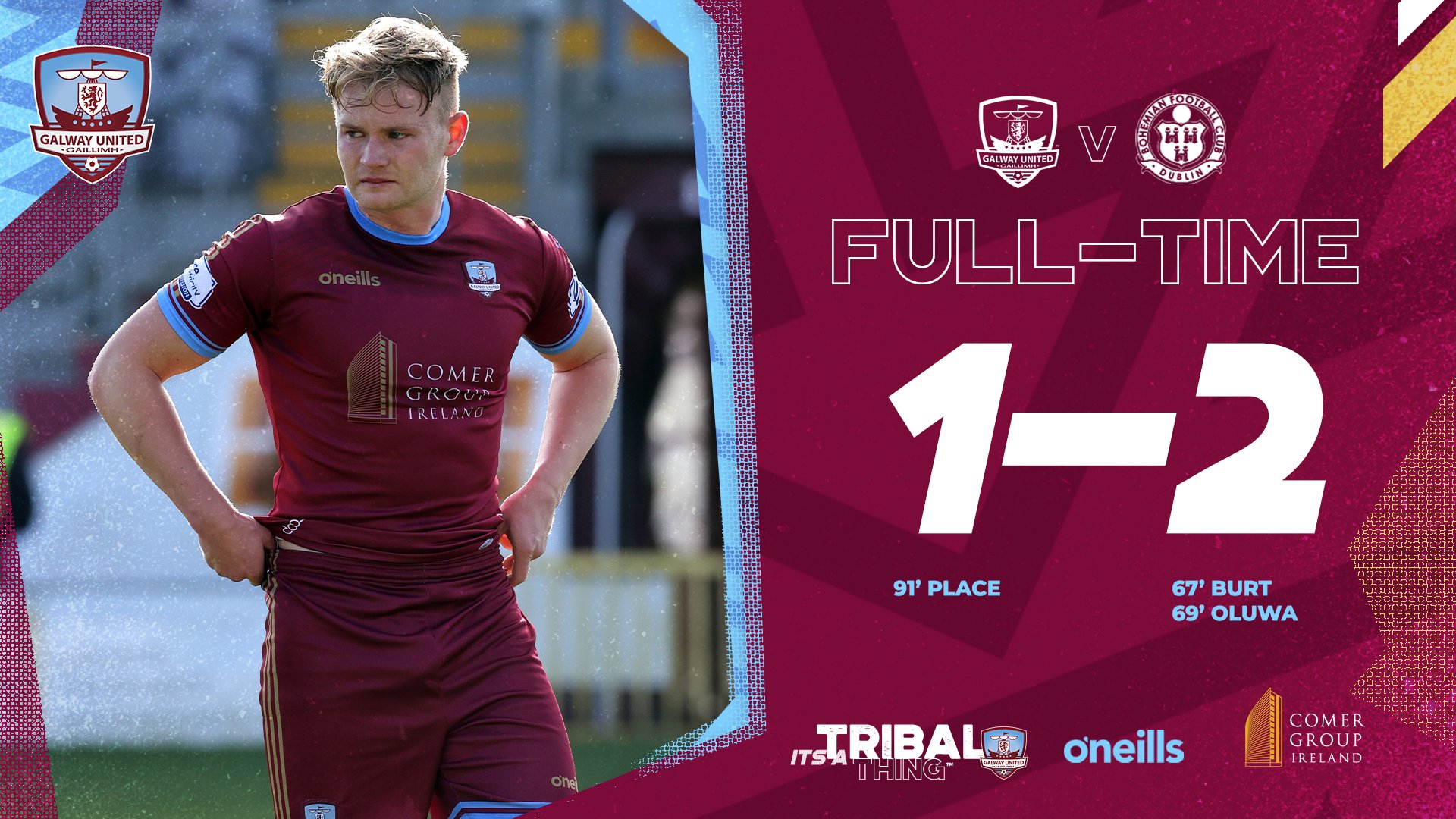 “Bohemians upped the tempo in the second half but I thought we still played well. We were disappointed with the goals but the lads kept going until the end and got the goal” – John Caulfield, Manager.

United defeated by Bohemians at a wet and windy Eamonn Deacy Park.

A tale of two halves tonight in Eamonn Deacy Park, it was evenly contested in the opening exchanges as both sides had an even share of possession, with John Caulfield’s side looked well capable of matching the visitors in pace and possession.

The first opportunity of the game came the way of United in the ninth minute. Ruairi Keating had a menacing run down the wing and found Shane Duggan in the penalty area. Duggan laid the ball off to Padraic Cunningham at the edge of the box and the striker tested James Talbot with a powerful strike.

A few moments later, United almost took the lead when Shane Doherty raced onto a ball in behind the Bohemians defence but the attacker’s attempted finish was cleared off the line by Anto Breslin.

The Tribesmen continued to threaten the Bohemians goal. Further chances fell to Stephen Walsh and Shane Doherty mid-way through the first half, Doherty coming the closest with a header that hit the post.

The rain poured down on Corribside as United proceeded to look lively up-front. Bohemians were struggling to deal with United’s high tempo.

Both Thomas Oluwa and Keating came close before the end of the half but their efforts hit the side netting.

It remained level at the half-time interval, United looking the more dangerous out of the two sides.

There were no substitutions for United at half-time as they lined up with the same team in the second half.

The opening interchanges of the second half were more even as Bohemians began to grow into the game.

The deadlock was broken in the 67th minute when Liam Burt took a speculative effort from 35 yards out which Conor Kearns was unable to save. A superb strike from the midfielder.

Bohemians doubled their lead two minutes later thanks to an Oluwa goal in the 69th minute. Oluwa headed the ball into the back of the net from a free that Kearns was unable to gather.

Bohemians started to control exchanges as their Premier Division experience was starting to show. Conditions were also beginning to get treacherous as the rain continued to lash down.

United grabbed a consolation goal just before the full-time whistle in the 91st minute. Place scoring from an indirect free-kick after Hurley laid it off to the forward inside the box.

Bohemians held onto their one-goal advantage as the full-time whistle came soon after. Another productive work-out for United who may feel unlucky to lose this pre-season game.

“Bohemians are a top team. First half I thought we played really well, we had a good few chances and could have scored but the lads worked very hard.

“The conditions were desperately difficuly but they were difficult for both sides.

“Bohemians upped the tempo in the second half but i thought we still played well. We were disappointed with the goals but the lads kept going until the end and got the goal.

“It was a great work-out once again and I am very happy with that.

“The main thing is that our football is very good and overall it is going to be a huge season for us and highly competetive.”