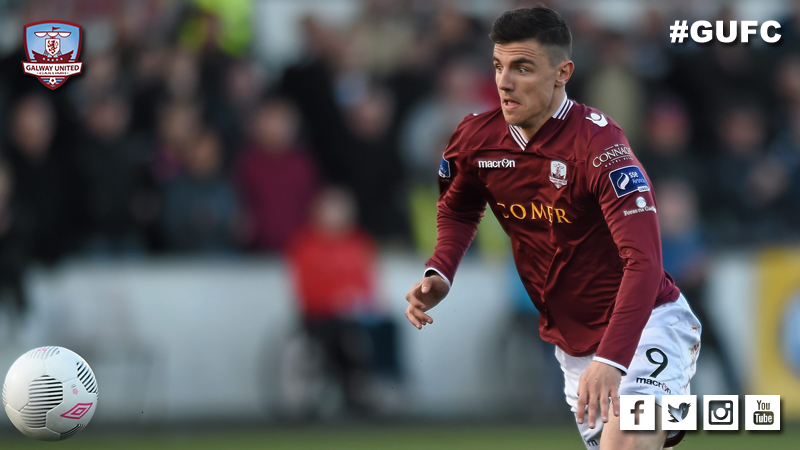 An emphatic performance from Galway United at the Carlisle Grounds, which culminated in a 5-0 victory, moved the club up into 8th position in the SSE Airtricity League Premier Division table.

Enda Curran’s expertly taken hat-trick took his goal tally to 6 for the season. Ryan Connolly then rattled in a goal of the season contender from all of 35 yards and 18 year old striker Padraic Cunningham grabbed his first league goal for the club, as United completed their rout of the Seagulls.

Supporters were still taking their seats at the Carlisle Grounds when Enda Curran broke the deadlock in the second minute. Bray goalkeeper Stephen McGuinness came to claim a Ryan Connolly corner kick, but misjudged the flight of the ball and when possession dropped to Curran at the back post, he volleyed the ball home confidently.

Padraic Cunningham continued to lead the line alongside Curran and the former cued up Ryan Connolly in the 3rd minute but the Mayo man saw his shot saved by McGuinness.

United tested Bray yet again, this time Ryan Connolly’s enticing free kick was flicked on by Jake Keegan but the American saw his effort flash wide of the upright.

The home side got off the hook in the 10th minute as Enda Curran bore down on goal, when Bray defender Alan McNally seemed to pull him down as he was about to shoot, but referee Dave McKeon waved away United’s protests.

Padraic Cunningham’s movement was causing havoc and in the 11th minute, he sprang the Bray offside trap before dragging a left-footed shot wide of goal. Gary Shanahan was inches away from tapping the ball in at the far post, but he couldn’t get the touch required.

Bray Wanderers had their first chance of the game in the 22nd minute when Michael Barker’s crossfield ball found captain David Cassidy but he volleyed wide.

10 minutes before half time, a Bray clearance dropped to Enda Curran at the edge of the box but his half-volley didn’t trouble McGuinness.

Stephen Walsh stayed up for a set piece and when the ball broke to the defender on the right wing, he smashed a powerful long-range effort goalward, that sailed over McGuinness’ bar.

Four minutes before half time, United’s pressure paid off. Gary Shanahan beat Daniel O’Reilly easily on the wing before delivering a pin-point cross to the back post for Enda Curran to head across Stephen McGuinness, doubling the Tribesmen’s lead.

United’s dominance didn’t abate in the second half and Cunningham was unlucky not to add his name to the scoresheet 2 minutes into the second period when he outpaced Hugh Douglas but Bray Wanderers goalkeeper McGuinness’ spread himself well to deny the youngster.

In the 53rd minute, Curran sealed his hat-trick with a sublime finish. Colm Horgan’s quick free kick picked Curran out and he peeled away before calmly firing past McGuinness.

On the hour mark, Wanderers winger Peter McGlynn broke through on goal but under pressure from United defenders he fired straight at Ger Hanley.

In the 64th minute, Ryan Connolly lit up the Carlisle Grounds with a fantastic long-range piledriver. Jake Keegan teed up Connolly, who smashed the ball powerfully, first time, off the upright before it nestled in the back of the net.

The pressure from the away side didn’t let up and Cunningham grabbed a deserved goal in the 75th minute. Having found himself with a yard of space at the edge of the Bray’s penalty area, Cunningham put his foot through it, smashing the ball home to score his first league goal for the club.

Bray Wanderers substitute Emeka Onwubiko attempted to grab a consolation for the Seagulls but he dragged his shot wide of Hanley’s goal.

United almost grabbed a fantastic 6th goal in injury time when Stephen Walsh showed tremendous skill to beat a Bray Wanderers defender before crossing to the back post. Conor Barry killed the ball with a fantastic touch, before rattling a shot at goal that flew inches over the crossbar.

The win moves United up to 8th place in the league ahead of Friday’s game against St. Patrick’s Athletic at Eamonn Deacy Park. Kick off: 7.45pm.