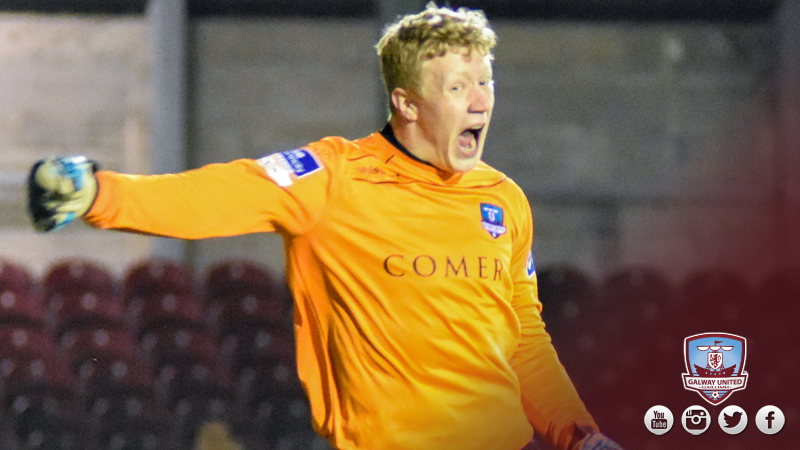 Galway United’s unbeaten record in 2016 at Eamonn Deacy Park continued tonight as the Tribesmen defeated Finn Harps on penalties, with young ‘keeper Kevin Horgan the hero for United, as the Tribesmen advanced to the EA Sports Cup Quarter Finals.

Both managers took the opportunity to make wholesale changes for tonight’s encounter, with Tommy Dunne making seven changes. The rigours of the league campaign may have taken precedence over a place in the next round of the competition, but the strength of the side despite the number of changes, is surely evidence of the evolution of Dunne’s squad.

Stephen Folan retained his place in defence, while alongside him starting berths were given to the trio of Cormac Raftery, Paul Sinnott and Marc Ludden. Gary Shanahan and Conor Melody retained their starting places on either wing, with Dunne pairing Alex Byrne, who was making his return from long-term injury, and Eric Foley in the centre of midfield.

Ruairi Keating played up front once again, while Padraic Cunningham made the starting line-up, having been sprung from the bench on Friday night. 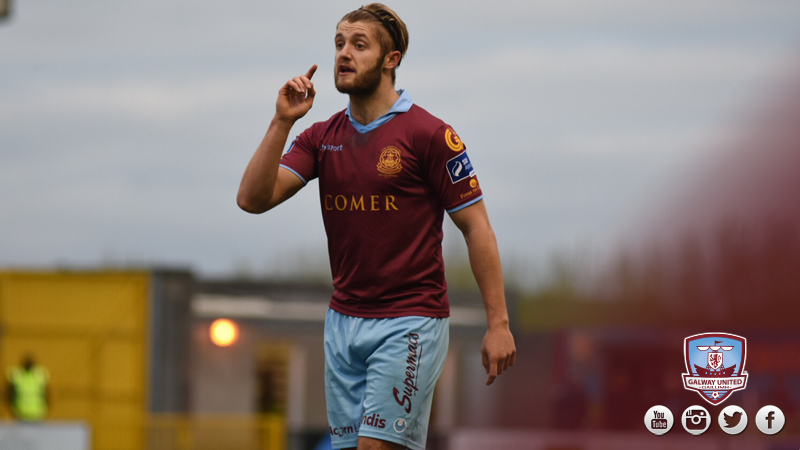 The home side almost opened the scoring in the first minute when Marc Ludden played a long throw behind the Finn Harps defence, giving Padraic Cunningham the chance to beat Ciaran Gallagher, but was unfortunate to see his toe-poked effort clear the crossbar.

As the teams began to settle into the contest, United tested the visitors’ ‘keeper for the first time. Great work from a dogged Gary Shanahan afforded him the space put a cross into the box, which was met by Cunningham, but Ciaran Gallagher was able to push it over his crossbar. It was the first real action for Gallagher, who put on a marvellous display for the Donegal side between the sticks over the course of the match.

With almost twenty minutes on the clock United were awarded a free kick on the edge of Finn Harps’ box, but Eric Foley’s effort was just the wrong side of the post. Minutes later, there was another chance for the Tribesmen when Paul Sinnott set Gary Shanahan off down the wing, but the Limerick native’s eventual shot went harmlessly wide.

Next it was the turn of the other flank to try to test the Harps’ defence. An excellent through ball from Marc Ludden sent Ruairi Keating though, but his dinked effort rattled the crossbar.

The half-hour mark was approaching when Harps had their first chance of note, when Michael Funston advanced up the right wing before feeding Matt Crossan, who was unable to direct his shot on target.

Five minutes before half-time, the visitors had a dangerous free kick in central position, but it failed to clear the wall. Harps had another chance to break the deadlock from a set-piece a short time later. A Liam Flatley free-kick was met unchallenged by Tommy McMonagle, but Kevin Horgan was alive to the danger and saved well.

Just before the half-time whistle, Ruairi Keating tested Gallagher once again with a low shot, but he was equal to it.

Ryan McConnell had a pop from long range at the beginning of the second period, but his dipping drive drifted wide of Kevin Horgan’s post. It wasn’t until the hour mark that either side threatened once more. In a United attack, the ball broke to Gary Shanahan at the back post, but his effort was saved well by Gallagher. 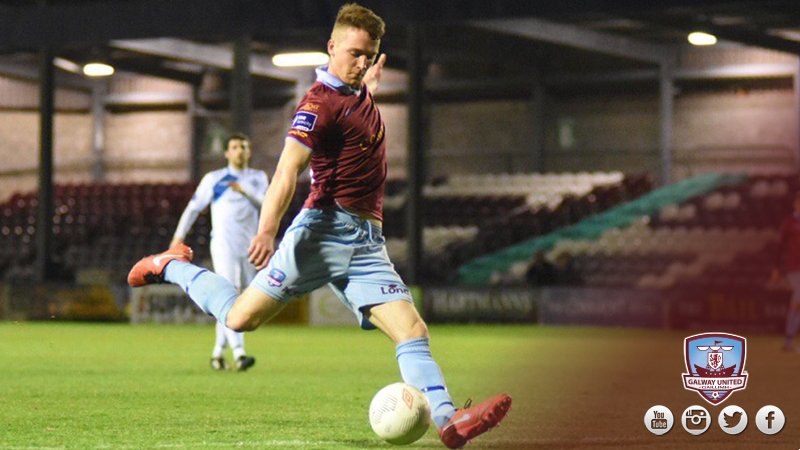 Kevin McHugh managed to get a deflected shot on target after using his strength to hold off Cormac Raftery, but Kevin Horgan had no trouble in dealing with it.

At the midway point of the second half, Gallagher was called to make successive saves from Cunningham. The second save allowed Harps to counter the home side, but the resulting effort from Michael Rafter was over Horgan’s crossbar. Cunningham drew yet another save out of Gallagher a few minutes later, as the ‘keeper narrowed the angle and saved smartly.

With less than twenty minutes left on the clock, manager Tommy Dunne elected to introduce Vinny Faherty in favour of Conor Melody to freshen up the attack. An Eric Foley free kick followed soon after, but his powerful effort, low into the corner, was palmed away by Gallagher. The Dubliner had another attempt from a free two minutes later, but it sailed well over.

In the 84th minute, Galway United captain Ryan Connolly was introduced, replacing Alex Byrne, who put in a huge shift in his first involvement of 2016.

As 90 minutes approached, it was Vinny Faherty’s turn to test the Harps netminder, but one-on-one, Gallagher once again denied the Tribesmen the lead goal

Gareth Harkin dragged a late effort wide of the post for Ollie Horgan’s men, as extra-time beckoned the sides.

Raftery was booked six minutes into extra time for a challenge on Tony McNamee, as the first half of extra-time threatened to pass without further incidents of note. However, Vinny Faherty had another efforted saved by Ciaran Gallagher in the dying minutes of the first half.

During the second half of extra time, Harps were forced to play the remaining minutes without the injured Keith Cowan.

With a victor being required on the night and 120 minutes of play plus stoppages having elapsed, penalties were needed to separate the sides. 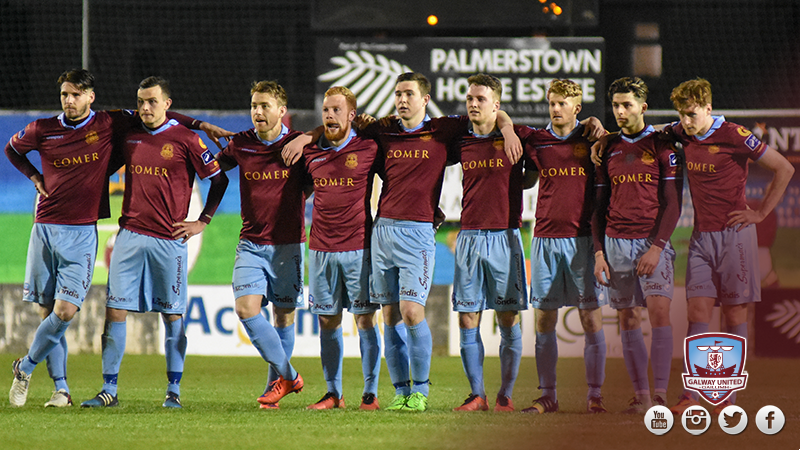 Folan took the initiative, stepping up to take the first penalty, which he duly dispatched.

Ryan Curran was first up for the Ballybofey outfit, but Kevin Horgan guessed correctly, getting a strong hand to the powerfully hit penalty, pushing it around the post.

Galway United captain, Ryan Connolly converted his to put United 2-0 up, before Tony McNamee pulled one back for the visitors.

Padraic Cunningham finally got the better of Ciaran Gallagher on the night, restoring United’s two-goal cushion in the shootout with a powerful penalty right in the top corner.

As if there there had not been enough drama already, successively penalties ratcheted up the tension. Kevin Horgan saved brilliantly from Ethan Boyle, before Vinny Faherty was denied by Ciaran Gallagher.

Matthew Crossan’s turn came, knowing that nothing less than a goal was required and was equal to the pressure, bringing Harps to within a goal of United.

Ruairi Keating put the ball down on the spot knowing he had the winner at the expense of his former club, if he could beat Ciaran Gallagher. That was what the Westport native did, putting Galway United 4-2 up on penalties and through to the next round of the competition.