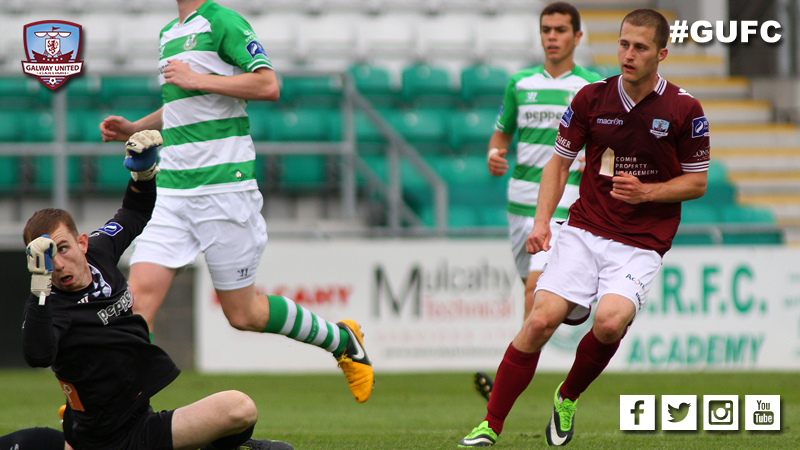 Galway United will be hoping their good form at Tallaght Stadium in 2014 continues in the SSE Airtricity League Premier Division when Tommy Dunne’s side take on Shamrock Rovers on Friday evening.

Last week United suffered a deflating home loss at the hands of Longford Town and the result was compounded by both of the clubs centre halves being sent off.

American striker Jake Keegan pounced in the 6th minute to give the home side a deserved lead but for the second home game in succession a red card was produced on quarter hour mark when Stephen Walsh was given his marching orders by referee Adriano Reale.

Longford pulled a goal back before half time and they continued to pile the pressure on in the second period in search of a winner. It looked like United had done enough to weather the storm but Don Cowan struck a sickening blow in the 93rd minute to seal a 2-1 win for Tony Cousin’s side.

Looking ahead to Friday’s trying fixture at Tallaght Stadium, Galway United manager Tommy Dunne is under no illusions about how tough a test awaits his players.

“It’s as difficult a place as you’re going to go in the league,” Dunne told www.galwayunitedfc.ie.

“You’re playing against a top three side. It’s a fantastic challenge for our players. They are looking forward to going and playing in front of a big crowd on Good Friday.

In contrast to Galway’s promotion winning campaign in 2014, where the club had a very settled side, Tommy Dunne has had to chop and change his starting eleven from week to week to combat suspension and injury problems.

“It’s always good to have a settled eleven,” Dunne explained.

“There is always opportunities for players to come and stake a claim and become a part of that settled eleven.

“Right now, there are opportunities and players need to take the chances when they’re presenting themselves. When everybody is fit and available I think it’s important that we settle in and play as a team.”

TEAM NEWS
Centre back partners Sam Oji and Stephen Walsh are both suspended for the trip to Tallaght Stadium.

David O’Leary is ruled out with a knee injury sustained in training on Tuesday morning.

Kilian Cantwell (knee) and Aaron McDonagh (knee) are both a few weeks away from returning.

Three players have returned from injury and are expected to be in contention for Friday’s game: Ryan Connolly (hip), Ger Hanley (achilles) and Marc Ludden (knee).