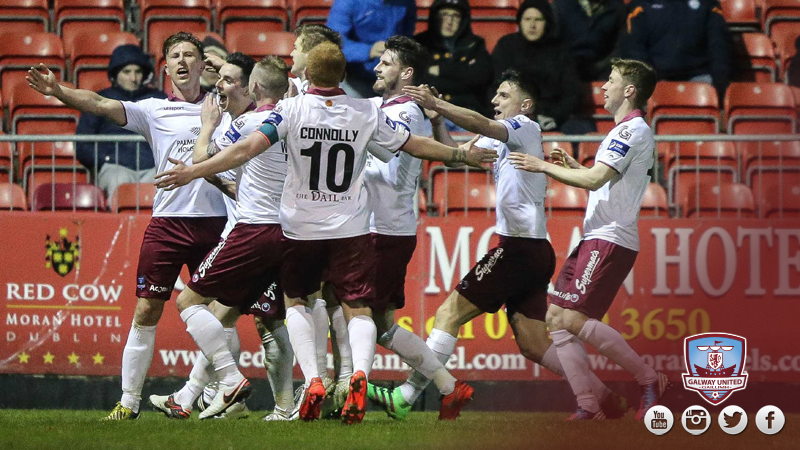 Galway United assistant manager Leo Tierney was on the media duty after Friday’s 2-0 win against Wexford Youths at Ferrycarrig Park.

An accomplished second half showing from the Tribesmen saw them depart the south east with the three points and Tierney saw a lot of positives, particularly in the second half display.

“We were disappointed at half-time that we hadn’t the lead goal. Second half we said we had to be positive and go for it. We had to be more attack-minded and we were and we did that in the second half. The pitch was difficult, but I thought we coped with it very well, the players were very good.”

Vinny Faherty bagged his 6th and 7th league goal of the season and Tierney praised the front-man, but he was quick to acknowledge the collective effort at Ferrycarrig Park.

“We’re delighted with Vinny. It was good to score off a set piece as well, which is something that we have been working on and I think tonight we got our reward for that. Vinny is getting the goals but the whole team is playing really well. We know it’s a work in progress, we feel there is more in us.

“We’re very pleased to keep a clean sheet. In fairness to Conor Winn, he was very good in the first half when we needed him and then Kilian Cantwell had to come in for Stephen Folan, who got injured.

“It didn’t really upset us because Kilian has been playing well and he’ll probably feel a little unlucky to be not starting the game. That’s why we have a squad of players, everybody knows their job when they come in and they know what their responsibilities are.”

Next up for United is a home game against Longford Town on Friday night, Tierney is hoping to see a big crowd at Eamonn Deacy Park to rally behind the players.

“Hopefully the support will be there. It’s been brilliant this year. Hopefully we’ll get the crowds out again against Longford Town. We’re really pleased, our supporters have been great for us home and away but Longford will be difficult. We have to go and recover now and prepare for another tough game.”