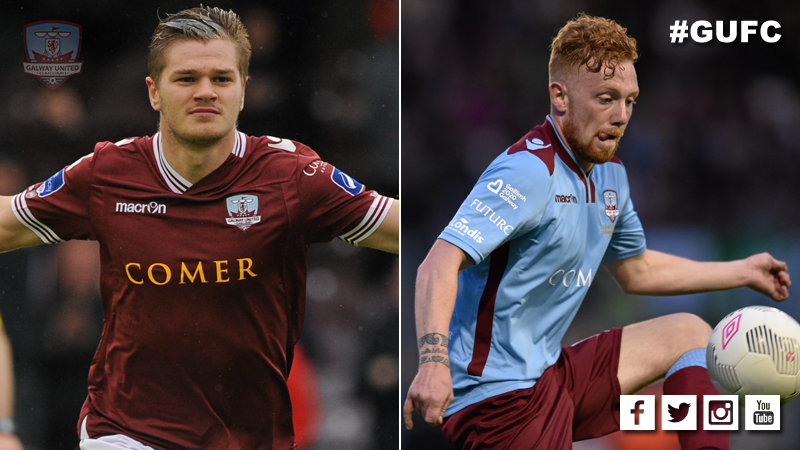 Galway United are delighted to announce that Ryan Connolly and Colm Horgan have signed new contracts with the club.

Both players have committed their futures to the Tribesmen until the end of the 2016 season.

In 2014, Connolly and Horgan were both voted on to the First Division Team of the Year. Both players have been integral parts of Tommy Dunne’s side in 2014 and 2015.

Horgan, 21, has made 37 appearances for Galway United in 2015. In his two seasons with the club, Horgan has only missed three competitive fixtures and he showed his versatility this season, operating at left back, as well as his natural right back position.

“This was his first year playing in the Premier Division. It’s a no-brainer to re-sign Colm, he did well last year, he’s done well again this year. He’s part of a family who are professional players, both Daryl and Kevin. I know what I’m signing.

“Colm has had no injuries, he’s played extra-times on a number of occasions. We’re delighted that he has re-signed. There was interest in Colm from other clubs, but it was important that we signed him back. He’ll be the first of many to sign back from our squad.”

Tommy Dunne believes Connolly can continue his development at Eamonn Deacy Park: “Ryan is an ambitious player and somebody who wants to push on and get better every week. I do feel he can continue to improve with us. He’s still young,” Dunne told www.galwayunitedfc.ie.

“Technically he’s excellent, and he has a good engine to get around the park. He’s a good trainer and a thorough professional. Last year he won the Player of the Year award with the club and he’s been a driving force with us. We missed him when he was injured. He’s an integral part of the group and we’re delighted he has put pen to paper.

“We’re trying to build a stronger squad, we’re trying to improve and keep our best players and we’re in the market for players at other clubs that we feel would improve us. Re-signing Colm and Ryan is a great start to our squad building.”

Shortly after putting pen to paper on his new deal, Colm Horgan spoke to www.galwayunitedfc.ie.

“It’s pleasing to secure my future now and not to have anything hanging over my head in the off-season,” Horgan conceded.

“I always knew that I wanted to re-sign with Galway United. It was nice for Tommy and the board to approach me so early about staying with the club.

“Next season we’re aiming to eradicate the errors we made this year. A lot of players, including myself, never had Premier Division football before. We know what to expect next year and we’ll be better for it.

“You can see the benefits of continuity around the league. Look at Dundalk, how many years have they had the core of their current group and they will be together again next year. Clubs are starting to realise that keeping players from year to year is really beneficial.”

Ryan Connolly was pleased to commit his future to the Tribesmen despite being the subject of interest from other clubs.

“I’m very happy to get it done and dusted this early because I had a couple of other people ringing me, but once Galway wanted to re-sign me I was putting other clubs off. If I could come to an agreement with Galway, then I didn’t want to go anywhere else,” he admitted.

“I’m delighted to have signed back again. I love Galway, It’s a relief to get my future sorted so quickly.

“As a club, if we’re not looking to push on then there is something wrong somewhere, the manager and everybody in the background will be eager to improve on this season. Then it’s up to the players on the pitch to do the business. We’ve got to be looking to improve every season,” Connolly concluded.