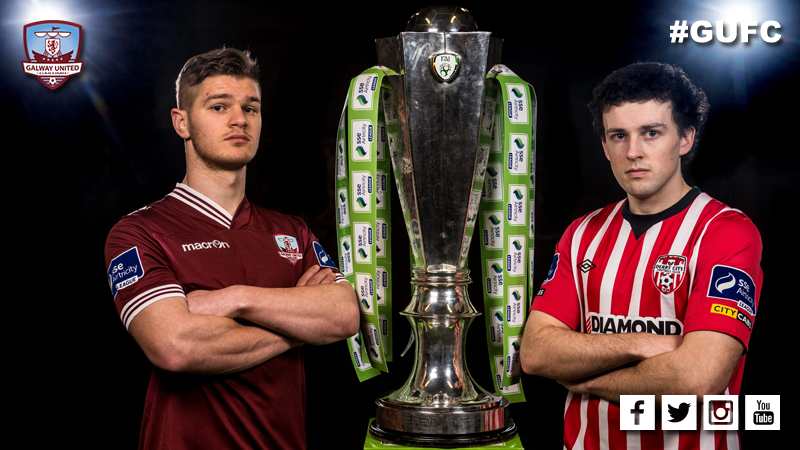 United enjoyed a productive first season back in Irish football, winning promotion at the first time of asking after defeating Shelbourne and UCD in the promotion Play-offs.

On front of the watchful eyes of President Michael D. Higgins, Galway United manager Tommy Dunne is hoping that his players can hit the ground running and make a positive impact in the top flight.

“It’s been a relatively long pre-season campaign, game-wise, we haven’t had too much action so I think everybody is just looking forward to the big kick off now.

“We’re eager to get back playing and straight into the league campaign. I was talking to some of our supporters and they just can’t wait for us to get going again because it’s a long break from November right through to the beginning of March.

“As soon as we got promoted at the end of last year I think everybody was really looking forward to getting going again and there’s no tougher test than Derry City but we’re at home which is something we’re glad of in the first game of the season.”

Dunne is eager for his young side to build on the success of last season’s promotion winning campaign.

“There’s history and tradition at this club and I think the majority of our group are part of that tradition now considering what they achieved last season.

“What we’re looking forward to now is making more history for the club and try to bring the club back to its original standing in the Premier Division.

“I know its had a couple of tough years but Galway football has always been extremely competitive and strong and I know a lot of Galway players have left and gone to other clubs because of the turbulent times here so we’re building a new breed that will make the supporters and people of Galway proud.

“The majority of our squad is from Galway and that’s the way it should be when you’re one of the biggest counties in Ireland. We should be able to produce one team that will be competitive in the top flight.

“In saying that, even when I was playing with Derry City – there were four Dublin lads to used to go up and play for Derry but the majority of the group were from Derry or the surrounding areas and in Galway that’s what you want also, we’ve got a handful of players from outside to bolster the group.”

The Tribesmen clinched promotion to the SSE Airtricity League Premier Division in style on front of a crowd of over 3000 people last Halloween and Tommy Dunne is eager to build on crowds like that in 2015.

“Their support is so important for the future of the club,” Dunne said.

“They were absolutely fantastic last year but we’ll need more of them again because we’re going to be up against it even from a crowd point of view this year.

“You can imagine other teams coming to Eamonn Deacy Park, they’ll look at coming to Galway with big crowds with them so we’ve got to make sure when they come that they’re in the minority in the stadium.

“From our point of view, we want them to support and get after the lads and give them that encouragement that will give the players the chance to go and win matches,” Dunne concluded.

TEAM NEWS
A suspension carried over the 2014 season means Alex Byrne will be unavailable for selection.

Kilian Cantwell (knee) will be out for another 5-6 weeks while Ger Hanley is ruled out with an achilles problem.

Marc Ludden is rated as doubtful after suffering a muscle strain in training on Thursday morning.

Maroon View will be available for purchase inside and outside of Eamonn Deacy Park for just €3 on Friday night. Preview HERE.