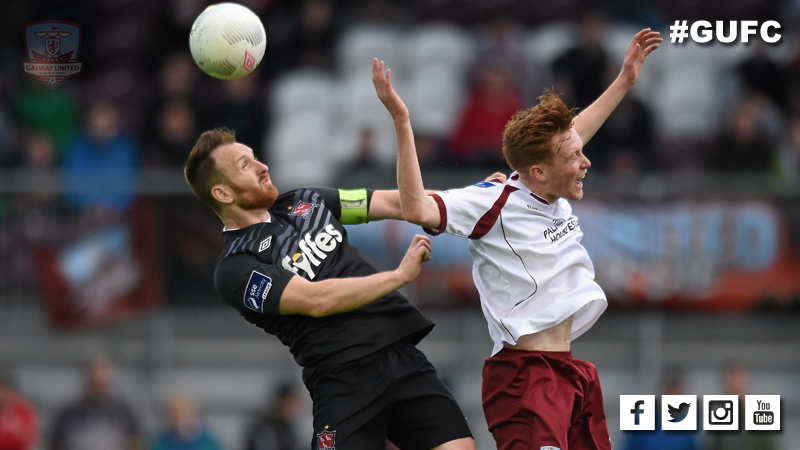 Galway United will look to book their place in the EA SPORTS Cup Final when the Tribesmen host Dundalk at Eamonn Deacy Park on Monday evening. Kick-off: 5.00pm.

It’s been over 18 years since the Tribesmen have featured in a Cup Final. On New Years Day in 1997, United overcame Cork City at Turners Cross to lift the League Cup.

TOMMY DUNNE: “LETS HAVE A GO AT DUNDALK”
“We have to go out and give it our all,” Dunne told www.galwayunitedfc.ie.

“There’s no pressure on us in any shape or form. We’re looking forward to the game.

“Circumstances aren’t ideal given the amount of injuries we have but you have to deal with that. I’m asking the players to get out and enjoy the game and to give everything.

“On our day, if we’re doing things properly, we can cause anybody problems in this league. We’ve got to go about our business in the correct manner, we can be a threat. We’re up against it playing against Dundalk, we’re playing against the best team in the country but it’s a Cup Semi-Final, so we need to get out and perform and try to progress.

“It’s a fantastic opportunity for us. We’re at home and I hope everybody comes out to support the players because they’ll need it. Between now and the end of the season, we need every living soul to come out and support the team because the club deserves it and we badly need it. We need everybody to be weighing in and pulling in the right direction.”

The young striker is looking forward to the clash but on Thursday morning he picked up a knock to his knee and Cunningham is doubtful to be fit for the game.

“It’s a race against time for me,” Cunningham explained. “Hopefully by this time tomorrow, my knee will have recovered and I’ll be passed fit to play. I’m desperate to be involved,” he stressed.

“I personally enjoy playing against Dundalk, they’re one of the best teams in the league. They play the game in the right manner and when I was lucky enough to get a few chances against them, I’ve scored a couple of goals. Right now, the hope is that I’ll be passed fit to play and my dream is to fire us into an EA SPORTS Cup Final.

“We have to take confidence from our last league outing against Dundalk, we were 3-0 down and we almost pulled off the most unbelievable comeback. I feel we should have nothing to fear against Dundalk, they’re arguably the best team in the league, but it’s eleven v eleven. We’ve got to go out and do our job professionally and who knows what might happen.

“It would be a privilege if I could help the club to get to a Cup Final, it’s my local team and hometown club. I would be emotional because I’ve never experienced it before. We know we’ve a difficult task on Monday but hopefully if we can overcome Dundalk, we can dream of doing the unthinkable.”

“It’s a Cup semi-final, players are going to be up for it, we’re missing a few bodies but sometimes games like this can bring you together as a squad, especially when there’s only 14 or 15 fit players. We’re all looking forward to it hugely.

“In our last game against Dundalk, they started well but we had a good second half performance. The game could’ve gone either way in the last 15 minutes and that’s something we can take into the Cup semi-final. Dundalk are a top team but we’re confident that we can cause them a few problems as well.

“Since I’ve started playing with Galway United, I’ve always wanted to win something with the club, especially with this group of players, it’s a really fantastic group to be involved in. It would be a huge achievement if we could progress, but we won’t look past Dundalk.

“It’s absolutely vital that we get a vociferous crowd behind us at Eamonn Deacy Park on Monday, every bit helps and we’ll need the support against the League champions,” Sinnott concluded.

TEAM NEWS
Galway United have a lengthy injury list ahead of their EA SPORTS Cup Semi-Final clash against the Lilywhites.

The Tribesmen received a further blow at training this morning when Padraic Cunningham twisted his knee and he is considered very doubtful for the clash.