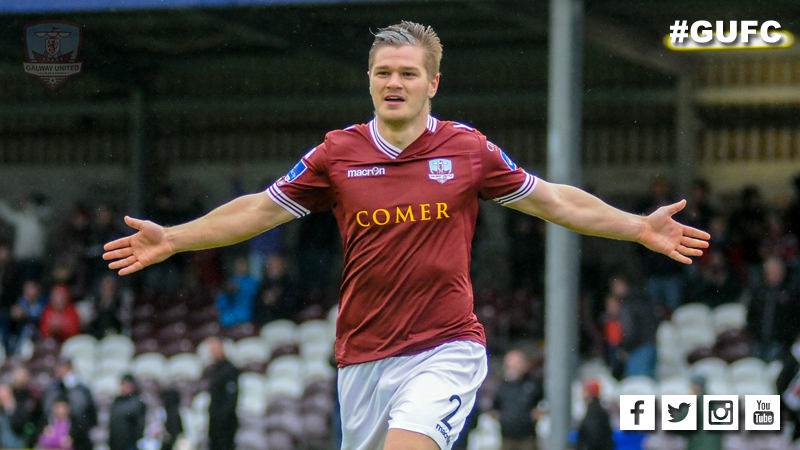 United will face the Saints, in what will be the Tribesmen’s first final in 18 years, on Saturday 19th September.

Both sides struggled to create any chances of note in the first half, but it was Lilywhites’ captain John Mountney who crafted the first real opportunity for either side. Mountney drilled a ball across goal and Dundalk striker Kurtis Byrne was inches away from getting the crucial touch.

Dundalk midfielder George Poynton then split United’s defence with an excellent through ball, Sean Gannon raced forward from fullback before attempting to square the ball but Kilian Cantwell snuffed out the dangerous with a well-timed clearance.

John Mountney then raced away towards goal and the Bohola native shot across Ger Hanley, trying to find the far bottom corner, but the United keeper’ got down to his right to save the effort.

On the half-hour mark, former United defender Paddy Barrett rose highest in the home side’s box, glancing a header just over the crossbar, after Darren Meenan had delivered a dangerous free-kick from the right.

Jason Molloy was making a welcome return to United’s starting eleven after a spell on the sidelines with a knee injury. His 59th minute free-kick unlocked the Dundalk defence and Sam Oji’s angled header looked to be destined for the bottom corner, but Paddy Barrett hooked the ball off the line.

Dundalk goalkeeper Gabriel Sava was then called into action when Gary Shanahan’s shot took a wicked deflection. Sava, back-peddling, made a wonderful fingertip save to keep the game scoreless.

Sean Gannon, on the overlap for Dundalk, smashed the ball across the six yard box. The ball evaded everybody but Shane Grimes, who tried to apply the finishing touch at the back post but Ger Hanley was equal to his effort.

Jake Keegan was then presented with an opportunity to add a fourth league cup goal to his tally, after some good work and a perfectly weighted ball from David O’Leary, but he put too much height on his curled effort and shot over.

Galway native Daryl Horgan had the final opportunity in normal time when he tried to lob his former Salthill Devon team-mate, Ger Hanley, but the ball landed on the roof of the net.

In the 98th minute, Alex Byrne and Colm Horgan played a neat one-two before the ball sat up nicely for Horgan to lash the ball at goal, but Sava was well placed to gather for the Lilywhites.

In the second half of extra time, Dundalk had two chances to score the decisive goal. Substitute David McMillan raced through but under pressure, he was dragged wide and his shot only found the side netting. Centre-half Paul Finnegan stayed forward after a Dundalk corner was cleared, but Daryl Horgan picked up the second ball and floated a cross deep into United’s box. Finnegan won the aerial duel, but his header just landed on the roof of the net.

PENALTIES
– Ronan Finn saw his penalty brilliantly saved by Ger Hanley, who got down to his right to get a strong hand to Finn’s effort.
– Stephen Walsh picked his spot, finding the bottom corner of the net. Sava guessed right but he couldn’t get a hand to it.
– David Millan’s penalty was also brilliantly saved by Hanley. Similar to Finn’s effort from 12 yards, Hanley dived to his right to save.
– David O’Leary stepped up for United and he opened up a two goal advantage when he rifled the ball into the net, sending Sava the wrong way.
– Daryl Horgan scored Dundalk’s first penalty when he blasted the ball into the corner, leaving Hanley rooted to the spot.
– Jake Keegan then stepped up and calmly sent Sava the wrong way, rolling the ball into the net.
– John Mountney kept Dundalk in it when he sent Hanley the wrong way with a composed penalty.
– Colm Horgan then sent United to their first cup final in 18 years, when he stepped up and found the roof of the net with a powerful penalty!