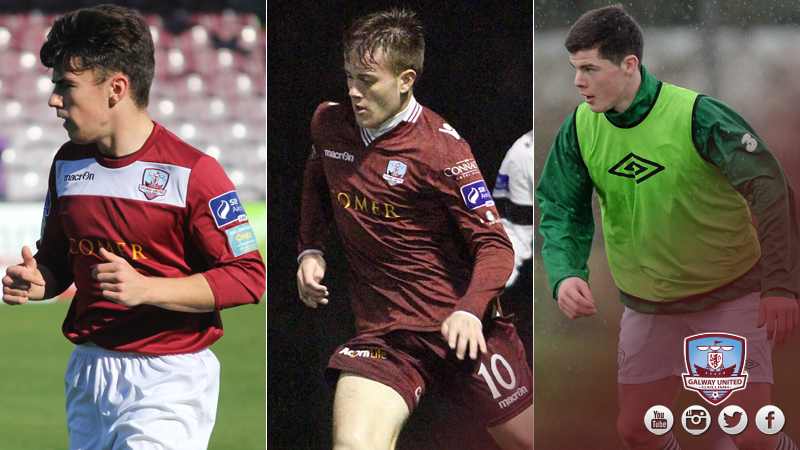 Striker Andrew Connolly has progressed through the clubs under-19 structure and the 19-year-old scored 2 goals in 7 appearances in 2015.

Eighteen-year-old full-back Gary Kinneen was also an integral part of Galway United’s under-19 side last season. Kinneen made 10 appearances, and along with Andrew Connolly, he has impressed in pre-season training with the Tribesmen’s first team squad.

Evan Murphy joins from local side Salthill Devon. The 16-year-old centre-back made 11 appearances for Devon’s under-17 side in 2015, scoring once against Shamrock Rovers. Murphy has been capped at under-15 level for the Republic of Ireland.

The trio are also eligible for Johnny Glynn’s under-19 squad in 2016.

Tommy Dunne was pleased to bolster his squad options with just two weeks to the start of the 2016 Premier Division season.

“Andrew Connolly and Gary Kinneen have spent a lot of time training with the first team in pre-season, Evan Murphy has just joined up recently,” he remarked.

“Connolly and Kinneen did well against UCD on Saturday and they give us further options. They’ll boost our squad.

“Evan Murphy turns 17 in March, he is a very promising player and he will train with the first team and we will keep a close eye on his development with the under-19 team. He’s got the physical size and we will work with him.

TOMMY DUNNE: “All three of the players are also eligible for our under-19 structure, it’s critical that they are continuing their progression and playing football week in, week out at the club.”

The triple signing brings Galway United’s squad to 23 for the 2016 season, however Dunne expects that number to grow again between now and March 4th.

“We’re waiting on clearance for another player and I’m looking to add another goalkeeper to group, they’ll complete our squad.

“We hope to have a squad of around 25 players, with competition in every position so I’m pleased with how we’re looking as the season approaches,” Dunne concluded.