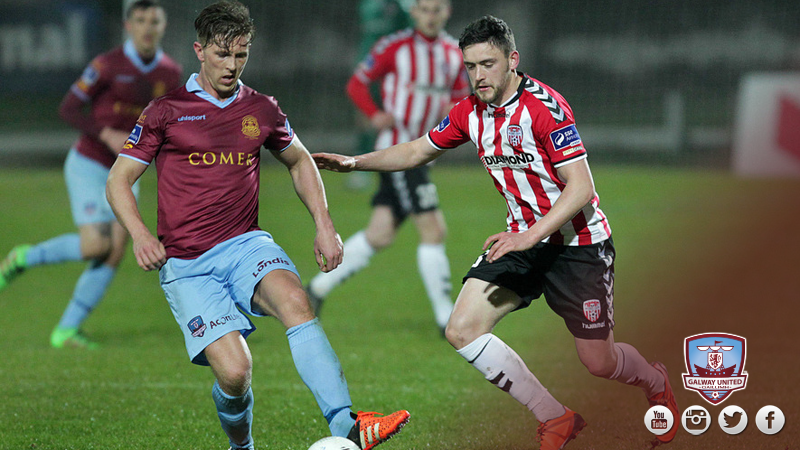 The Candystripes have made an excellent start to the season under the guidance of Kenny Shiels and they’re currently sitting in third position in the table, six points ahead of United.

Galway United will hope to make a strong start to the month of June after experiencing a forgetful month of action in May, where the Tribesmen lost five out of six games.

Tommy Dunne wants his players to atone for a poor points haul in recent weeks with a win against Shiels’ side at Eamonn Deacy Park before the break.

TOMMY DUNNE | “WE’VE GOT TO MAKE SURE THAT WE STAY IN THE RACE.”
“Going down to ten men in both of our last home games didn’t allow us to compete,” Dunne explained.

“Both of the incidents occurred in the first half of both of the games and that makes things difficult. We were well in both games and the disappointing thing is we didn’t have the eleven to push for either of the games.

“We need to get three points on Friday. If Derry City win, they go nine points ahead of us and if we win, we’re three points behind, so it’s a big game for both clubs.

“We’ve worked very hard up to now. I don’t think we’ve got the rub of the green at certain times, but I believe you create your own luck through hard work.

“We’ve got to make sure that we stay in the race. That’s the single biggest and most important thing. If we have opportunities, we’ve got to take them. We’ve got to give ourselves a chance and we haven’t done that in the last two home games.”

TEAM NEWS
Tommy Dunne has a lengthy list of absentees to contend with ahead of Friday’s league clash against Derry City.

There are doubts over the fitness of Kevin Devaney (thigh) and Marc Ludden (calf). Both players will undergo late fitness tests ahead of the game.