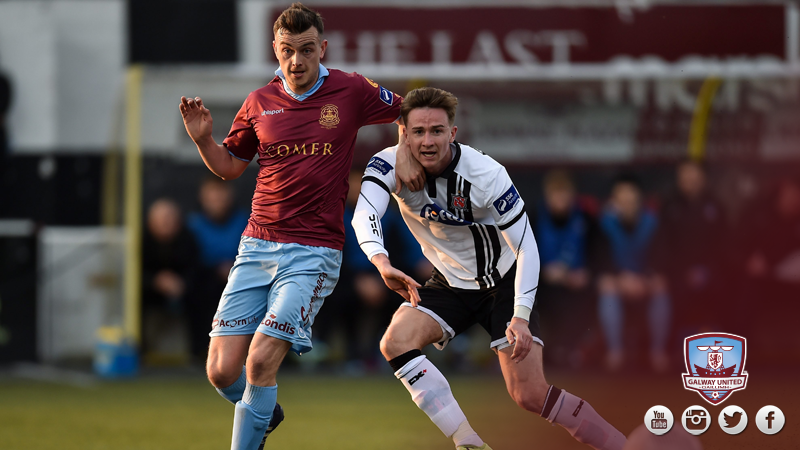 League leaders Dundalk travel to Corribside for the first time in 2016.

Galway United, who currently sit in 5th place in the SSE Airtricity League Premier Division table, won their last home outing against Wexford Youths 4-2, but last week they were held by Longford Town at the City Calling Stadium in a frustrating 1-1 draw.

Tribesmen boss Tommy Dunne wants his players to keep the pressure on 4th place Shamrock Rovers when the Lilywhites come to town, but he acknowledges it will be a difficult task against Stephen Kenny’s side. The match kicks-off at the later time of 8.00pm.

DUNNE CALLS FOR CONSISTENCY AHEAD OF LILYWHITES CLASH
“I was at Dundalk’s game against BATE in Tallaght Stadium, it was a wonderful performance from them. Everybody in the ground was on their feet at the end. We’re happy for them.

“We’re really looking to the Dundalk game, especially after they secured such a high profile win in Europe. It’s a great test for us.

“It just shows that if we’re not one hundred percent tuned in, then the quality that Dundalk possess will cause us serious problems. Everybody at the club is relishing the match. It’s an exciting game to look forward to, both teams play good football.”

After Tommy Dunne saw his side draw against bottom of the table Longford Town for the second time this season, the Dubliner has called for more consistency at Eamonn Deacy Park.

“The reason teams are in the top half is they have that level of consistency, they perform at a level for more sustained periods. We need to make sure that we’re a little more consistent in our performances.

“When we went 1-0 down to Longford Town last week, that’s when we really started to get out and play. There is no need for us to wait until that stage of a game before we get going.

“It’s hugely important that we perform to best of our ability against Dundalk. On Friday, the game is live on television. A lot of people will be tuning in and we’re expecting a big crowd at Eamonn Deacy Park too.

“We’re keen to give a good account of ourselves as always in-front of our supporters,” he concluded.

Stephen Folan and Gary Shanahan both picked up knocks against Longford Town last week, forcing the duo off at the City Calling Stadium. Both players are rated as doubtful for the Dundalk game.