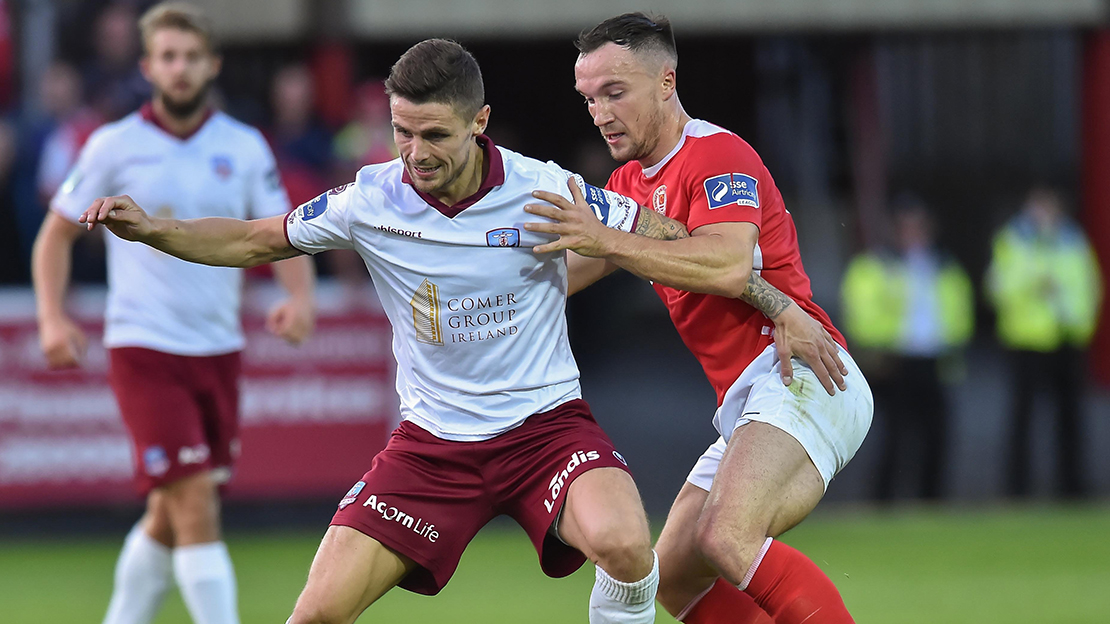 Just three crucial games remain in the SSE Airtricity League Premier Division season. Galway United host St Patrick’s Athletic at Eamonn Deacy Park on Friday evening in a game that could have a huge bearing on who avoids a spot in the dreaded bottom three in the league table come October 27th. Kick-off is at 7.45pm.

Purchase tickets in advance for the St Patrick’s Athletic on our online shop. CLICK HERE.

The winner of this crunch league fixture will take a massive step towards Premier Division safety, with just one point separating the sides heading into the fixture.

Both club’s played out draws with dramatic endings last week. St Patrick’s Athletic conceded an injury time equaliser against Limerick and Galway United had to settle for a 3-3 draw away to Bray Wanderers when Ronan Murray saw his 92nd minute penalty saved by Peter Cherrie.

When the sides met in April and June, both league games finished 1-1. However Shane Keegan’s side knocked St Patrick’s Athletic out of the FAI Cup at the end of August, coming away from Richmond Park with a 2-0 win.

KEEGAN HOPES EAMONN DEACY PARK CROWD WILL ENERGISE HIS PLAYERS
“The prize on offer is massive in this game. If either team wins, they would be placed in a very strong position to confirm their Premier Division safety. It’s a huge motivator for both sides.

“St Pats are in good form, they’ve suffered defeats against Dundalk and Bohemians recently, but they were reduced to ten men in both of those games. I was at their game against Limerick last week and they played them off the park, it was daylight robbery that St Pats didn’t pick up the three points.

“Our game against Bray Wanderers was so topsy-turvy. Going to Bray initially, we probably would’ve taken a draw and when you’re losing 3-2 with just seven minutes remaining, you definitely would.

“The way the game finished up, there was a few regrets after, but I don’t think there should be any. We came from behind twice, we demonstrated our character once again. We’re not happy to concede three goals, but we battled back twice.

“We can’t control the results around us, with Sligo getting a win, some of our supporters would’ve been disappointed that we didn’t beat Bray, but we can only look after our own results.

“When we played Sligo at Eamonn Deacy Park, we had a big crowd in and there is absolutely no doubt that it makes a big difference. It makes a world of a difference to the players, the atmosphere was electric.

“The crowd energised us and helped us to get to a strong level of performance against Sligo and hopefully we will have another big crowd at Eamonn Deacy Park on Friday for what will be another crucial game.”