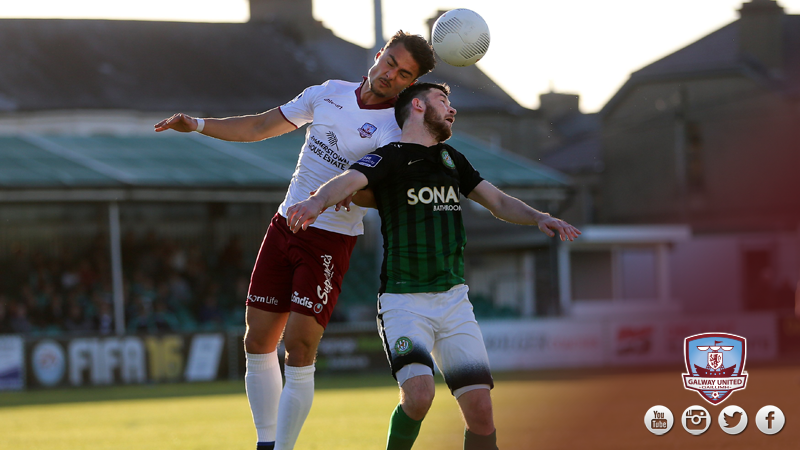 Galway United got back to winning ways on Friday night, coming away from the Carlisle Grounds with a hard-fought 2-1 win.

An exquisite free-kick from Eric Foley, and a 40 yard drive from Marc Ludden, his first goal for the club, secured what could prove to be a vital win for Tommy Dunne’s side.

United’s rivals in the league table Shamrock Rovers, St Patrick’s Athletic and Derry City dropped points on Friday night, so it was imperative that the Tribesmen broke a streak of four games without a win when they visited the seaside.

With just two minutes on the clock, United received a big let-off when Bray spurned a gilt-edged chance. Hugh Douglas crossed for Ryan Brennan, and the former Shamrock Rovers man nodded the ball down to Ger Pender, who seemed to have the simple task of applying a finishing touch, but somehow he pulled his close-range effort wide.

Bray Wanderers keeper’ Peter Cherrie endured a nervy moment when Ruairi Keating charged down his clearance, getting a block on the ball. Luckily for him, the ball crashed into the side netting.

Eric Foley showed his quality from a dead-ball 20 minutes in at the Carlisle Grounds. 25 yards from goal, Foley shot across Peter Cherrie, curling the ball into the far top corner, out of the Scotsman’s reach.

Foley’s midfield partner Alex Byrne showed great feet, skipping past two challenges before attempting to play Ruairi Keating in, but Cherrie was quick off his line to snuff out the danger.

Marc Ludden’s clearance out of defence unlocked Bray’s static backline, Ruairi Keating peeled off and latched onto the ball but he snatched at his shot and blasted well wide.

Colm Horgan beat a Bray Wanderers defender before slipping a pass into Ruairi Keating, who swivelled on the ball before lashing at the near post, forcing Peter Cherrie into a smart save.

Eric Foley went close to doubling his tally from another free-kick moments later, but unfortunately he dragged his curling shot too far wide and he didn’t trouble Peter Cherrie this time.

Conor Winn was forced into a crucial double save moments before half time. Ryan Brennan tried to curl the ball around Winn into the far corner but he pushed the ball to his left, Robbie Creevy followed the rebound in, but he saw his goalbound header pushed onto the crossbar by Winn.

A well-worked team move almost earned United a second goal. Kevin Devaney skipped past Hugh Douglas before lining up Eric Foley, who made a crisp connection with the ball on the outside of his boot, but he smashed off the outside of the post with Peter Cherrie rooted to the spot.

On the hour mark, Bray Wanderers winger Dylan Connolly cut in from the left before unleashing a shot that crashed off the crossbar with Conor Winn beaten.

Kevin Devaney gave Hugh Douglas a torrid time and he drove past the defender once again before trying to squeeze the ball past Peter Cherrie at his near post, but the former Dundalk keeper’ got his angles right and saved.

Ryan Brennan zipped a free-kick across a crowded penalty area and his effort clipped off the top of the upright on its way over.

Dylan Connolly was frustrated once again by United, he muscled his way past Colm Horgan and shot low and powerfully, but Conor Winn denied him with his feet.

With just over 15 minutes left to play,  Marc Ludden scored a fantastic goal from 40 yards to give United some breathing room. It was Ludden’s first goal for Galway United. The full-back spotted Peter Cherrie out of position and he drove the ball goalward with power. Cherrie saw the shot late, he scurried back, but there was too much power on the ball and he was helpless to try and stop it.

In injury time, Bray Wanderers pulled a goal back, Dylan Connolly crossed for Karl Moore and he cushioned the ball down to Andrew Lewis, who volleyed acrobatically past Conor Winn.

The goal mattered not however and United held on for a crucial win ahead of Friday’s FAI Cup clash against Bohemians at Dalymount Park.