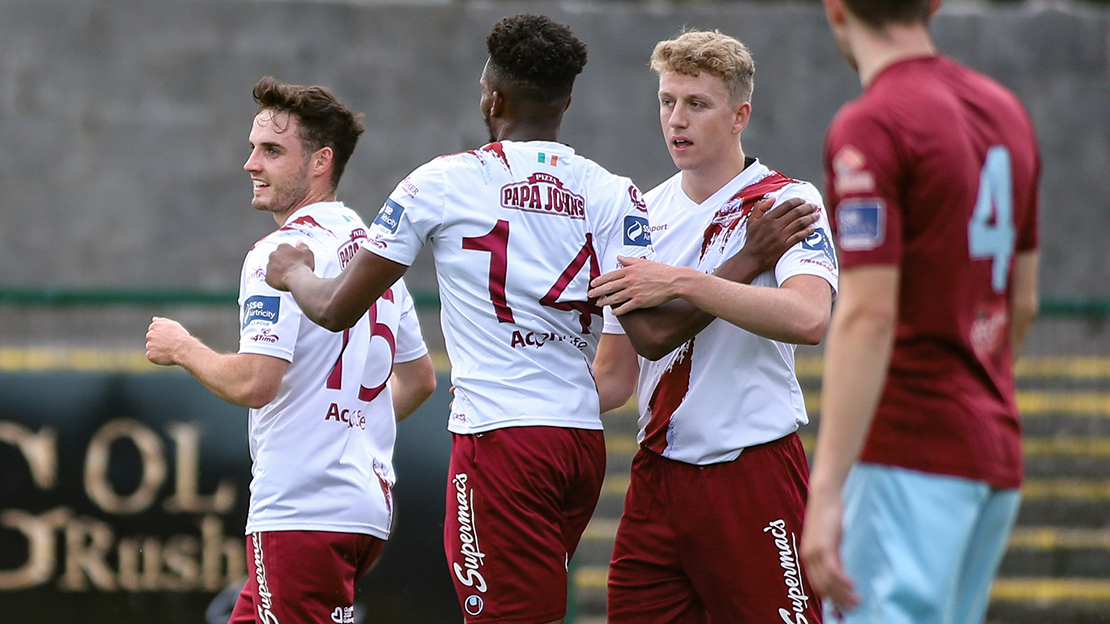 Galway United climbed closer to the play-off places with a valuable win against Cobh Ramblers at St. Colman’s Park.

The hosts made Alan Murphy’s side sweat in a second half where they threw men forward in numbers.

Two first half goals in the space of two minutes put United in control at the Cork venue. Conor Barry bagged his 7th league goal of the season and Eoin McCormack scored his third in as many games.

Stephen Henderson’s side threw caution to the wind in the second half and clawed a goal back when a cross from Jaze Kabia trickled all the way to the back post for the waiting Stephen Kenny to slot past Tadhg Ryan. 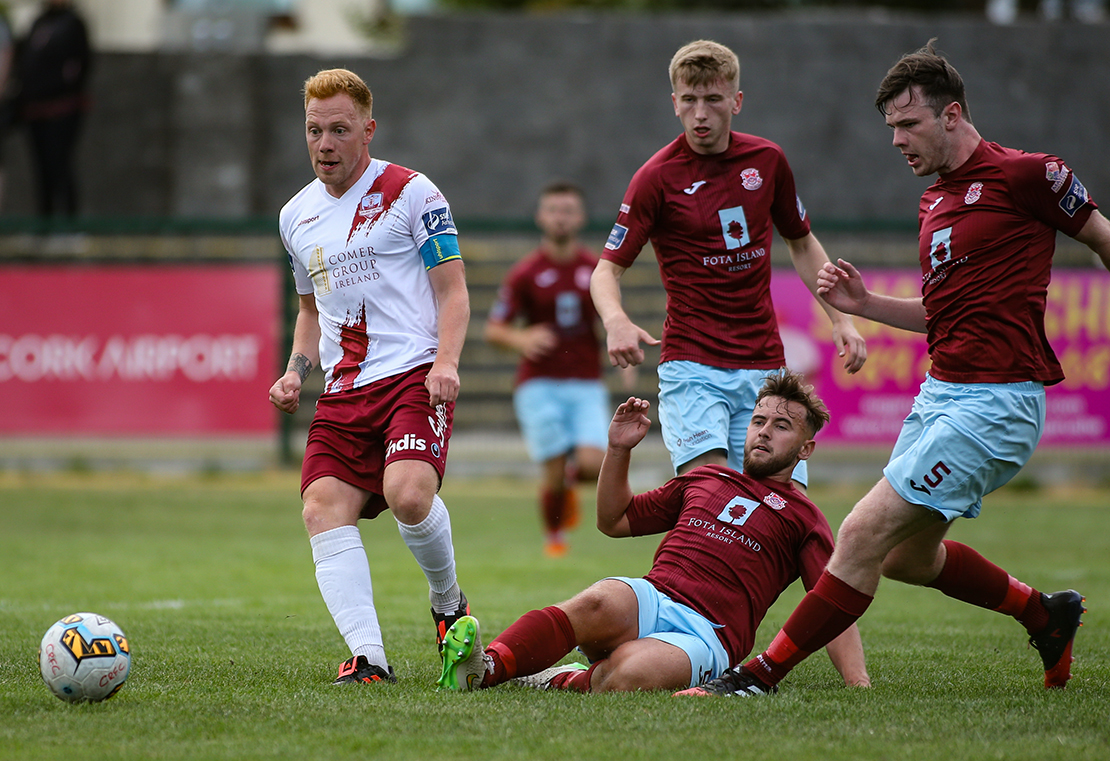 There was a tentative start to proceedings on a difficult pitch. The first chance of note fell to United skipper Ryan Connolly. Eoin McCormack held the ball up well before spraying it wide to Carlton Ubaezuonu, who composed himself before dragging the ball back for Connolly, but he side-footed over.

Stephen Kenny delivered a cross from the right that Tadhg Ryan came to collect, unfortunately for Ryan, he collided with his own teammate, Adam Rooney in the process. However Ryan made amends, quickly recovering to sprawl himself at Denzel Fernandes’ low effort to save.

Marc Ludden’s long throw was then flicked towards goal by Eoin McCormack but Cobh’s Stephen Christopher got his body in the way. He miscued his clearance however, only as far as Adam Rooney, but his first-time effort was always rising and never troubled Paul Hunt.

The opening goal did eventually arrive midway through the half and it deservedly came the way of the away side. Ryan Connolly slipped the ball wide to Robbie Williams in a crowded penalty area and Williams elected to fire a low shot towards the far corner, forcing Paul Hunt into a save with his feet but it mattered not, as Conor Barry pounced on the loose ball to fire United into the lead. 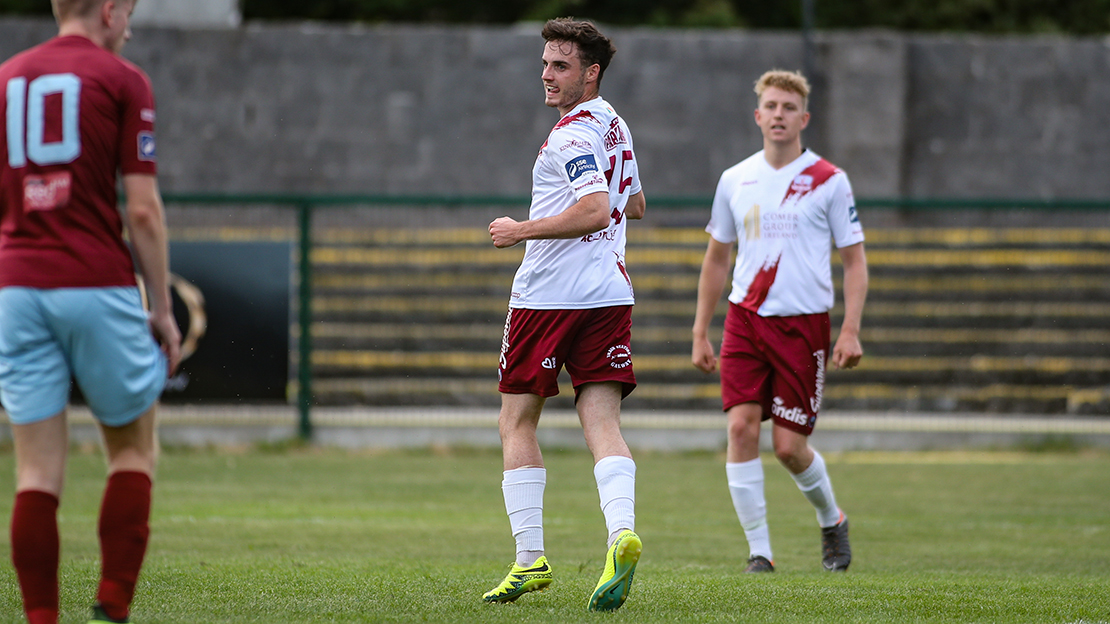 Barry was instrumental in the creation of United’s second goal, which arrived only two minutes after his opener. Barry snapped into a challenge, dispossessing David Hurley from a Cobh throw-in before setting up Eoin McCormack, who rode the challenge of Ben O’Riordan and slotted the ball into the far corner.

The game should have been out of sight just moments before half-time, but Ryan Connolly fired inches wide of the post. Alex Byrne whipped the ball into Connolly’s feet and he offloaded to Carlton Ubaezuonu before spinning and receiving the ball from Ubaezuonu once again, but his toe-poke flew agonisingly wide of goal with Paul Hunt stranded.

Ubaezuonu tested Cobh’s resolve early in the second half when he got on the end of Ryan Connolly’s lobbed through ball. The flighty winger beat Kevin Taylor and James McSweeney before curling a shot narrowly wide on his weaker right foot.

Cobh almost pulled a goal back in spectacular fashion. Robbie William’s clearing header sat up nicely for Ian Mylod, and he connected with a sweet volley that shook the stanchion behind the goal. 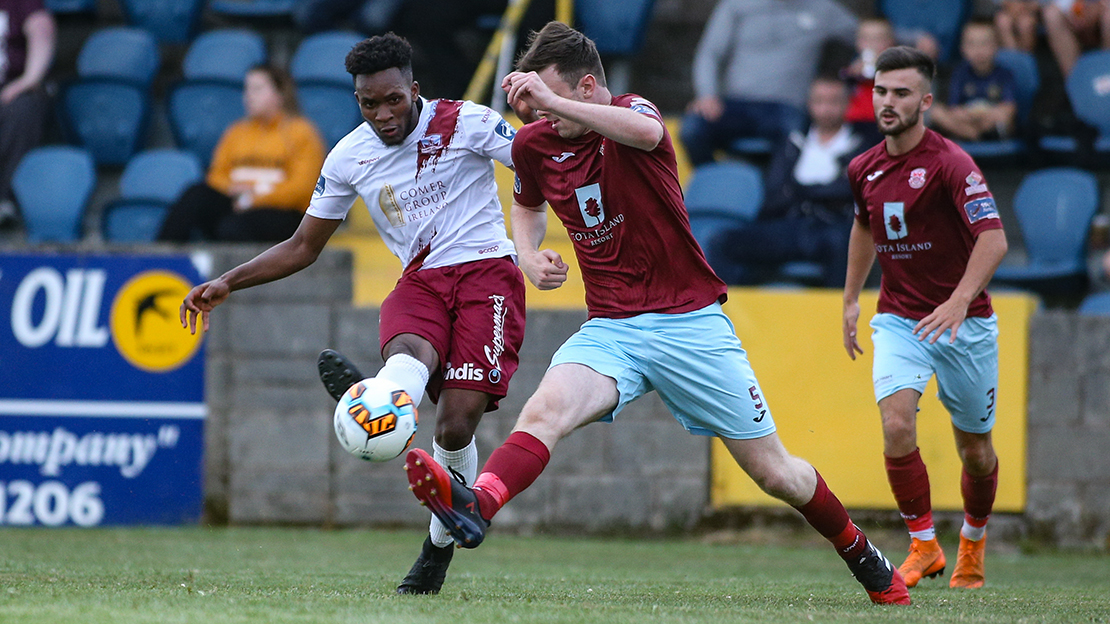 Former United winger Stephen Kenny did give the Rams hopes of a revival when he got on the end of Jaze Kabia’s cross and fired under Tadhg Ryan.

The hosts had most of the play in the second period and with five minutes remaining, Ben O’Riordan rose in the box to get a powerful header to Stephen Kenny’s corner kick, but the ball just cleared the upright.

Into injury time, Cobh poured forward in search of an equaliser and Charlie Fleming drew an impressive save from Tadhg Ryan, who had to get down to his right to deny Fleming from distance.

Cobh had one last chance to get a late leveller, but deep in injury time, Chris Hall’s free-kick was well dealt with by Tadhg Ryan and United held on to claim another important win.