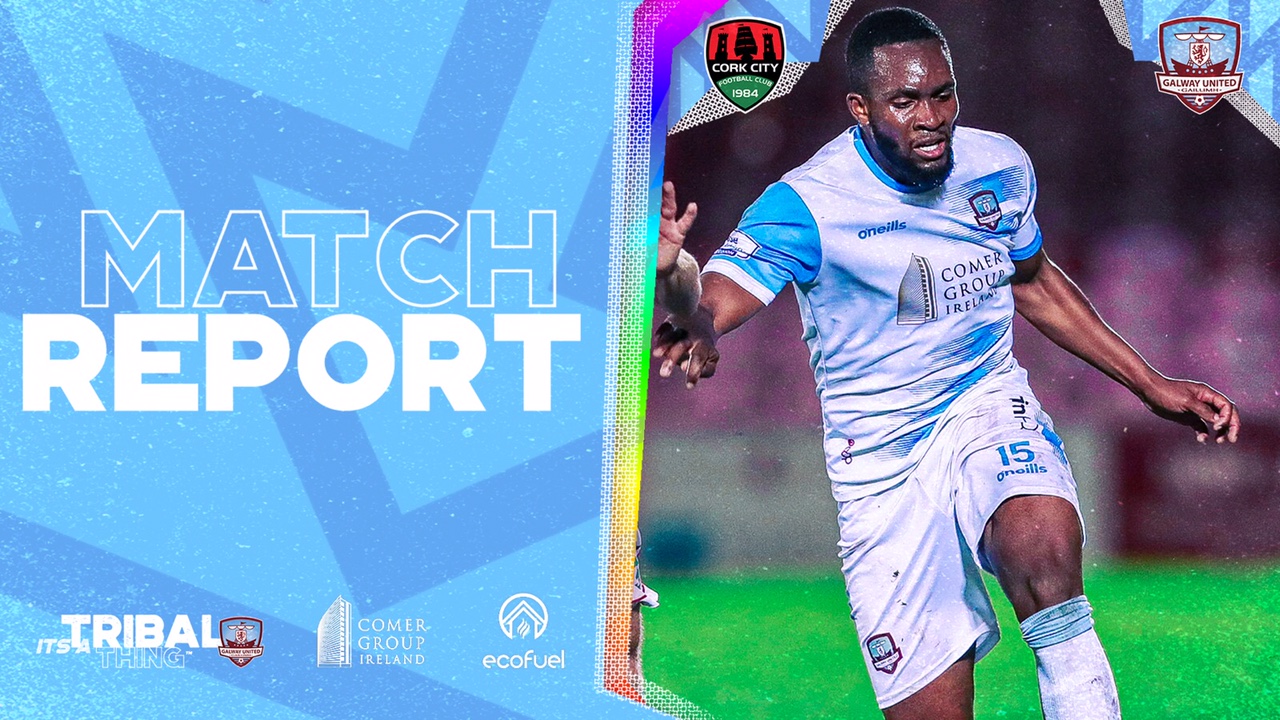 “I encourage all United fans to get to Bray next Wednesday and we would love to have a full house next Sunday” – John Caulfield, Manager

United went into their final league game of the season against Cork City in fine form after winning their previous four fixtures in the First Division. The Tribesmen, who will play Bray Wanderers next Wednesday in the first-leg of the playoffs, were without several players for their match at Turner’s Cross on Friday night. United manager John Caulfield made ten changes to the side that faced the Seagulls a week ago, with under-19 player Liam Corcoran making his full debut on Leeside.

It was a cold and rainy evening down south with the ball being held up on a wet Turner’s Cross surface. It was City who started the brighter with Alec Byrne having the first opportunity of the game but his effort went harmlessly over Luke Dennison’s crossbar. The skilful Dylan McGlade was also unable to hit the target a few minutes later.

After a scrappy opening 25 minutes, the scoring was opened in the 29th minute. Jonas Hakkinen got on the end of a McGlade free-kick to head the ball past Dennison to give City the lead.

It continued to be a half that lacked many chances – United struggled to create any clear openings against a solid City backline before the break, with Colin Healy’s outfit looking dangerous in attack at times. It remained 1-0 at the interval.

The rain lashed down at the start of the second half with the damp conditions playing a part for both teams throughout the 90 minutes.

McGlade continued to be a nuisance for the United defence and came close with a deflected effort from a tight angle a few minutes into the second period.

City pressed for a second goal and it arrived in the 62nd minute. Byrne pounced on a rebound that came off a United player and made no mistake from close range as he found the back of the net at the shed end to double their advantage.

Soon after, the home side made it 3-0 on the 71st-minute mark when Cian Coleman got on the end of a fine McGlade corner kick to give City a commanding lead with twenty minutes to go.

United’s first clear-cut opportunity of the game came in the 80th minute when Carlton Ubaezuonu broke free of the City backline but couldn’t test David Harrington in net.

City saw out the game effectively and were deserving of victory against an under-strength United outfit.

United’s concentration now turns to the playoffs next week.

“We decided that a lot of guys needed game time after we got second-place last week. I think it is good as two of our under-19’s got their first debuts. They both did very well and we had another couple of players who got their first starts this season.

“We always knew it was going to be difficult, City deserved to win but from our point of view, it was about getting the players game time. Now we go into the most important week of the season. We know going to Bray on Wednesday is going to be an extremely tough game. We have two cup finals next week.

“I encourage all United fans to get to Bray next Wednesday and we would love to have a full house next Sunday.”

Our next game is in the playoffs when we play Bray Wanderers at the Carlisle Grounds next Wednesday at 7.45pm.