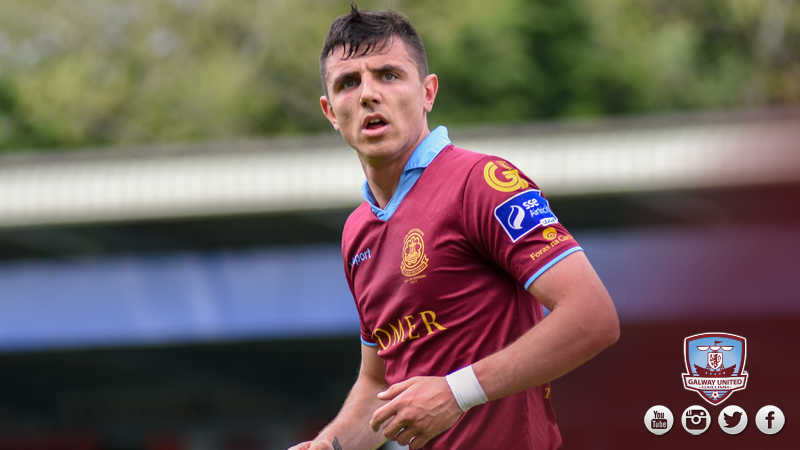 Galway United were frustrated by a resolute ten man Derry City side at Eamonn Deacy Park on Friday evening.

City saw Conor McCormack sent off after he body checked Marc Ludden and the combative midfielder received his marching orders from referee Jim McKell. Despite playing with a numerical advantage for over 65 minutes, United could find no way past Ger Doherty.

United started brightly and with a quick tempo, Ryan Connolly was demanding possession and keeping the home side on the front-foot in the early stages. Connolly carved open Derry’s defence, setting up Ruairi Keating with a subtle ball over the top, Keating ambled towards goal, Ger Doherty tried to spread himself but Keating blasted the ball towards the far corner, where Dean Jarvis showed tremendous positional awareness and anticipation to head the ball off the line.

An Enda Curran corner found the head of Kilian Cantwell, who flicked the ball onto Ruairi Keating, who helped the ball onto Stephen Folan, but he failed to keep his powerful header down.

Nathan Boyle scored twice against Galway United earlier in the season when the sides met at the Brandywell and he came within inches of grabbing a third goal in the 17th minute. Full-back Dean Jarvis raided forward before flashing a ball across the box, Boyle lunged to make a touch, but he couldn’t make the required connection.

Conor McCormack received a yellow card in the 19th minute for a dive in the penalty box and nine minutes later he was sent for an early bath by Jim McKell. A neat piece of interplay caught out McCormack, and he halted Marc Ludden’s progress with a cynical foul.

In the second half, Derry dropped deeper and deeper, content to hold onto what they had and they allowed United to own the ball, but poor finishing cost Tommy Dunne’s side what would’ve been a valuable and much-needed three points.

Derry City substitute Keith Ward picked up possession 30 yards from goal and with little other options, he went for a powerful drive, but it was straight at Conor Winn.

Kenny Shiels’ side survived another goal scramble when John Sullivan crashed a left-footed effort in from the edge of the box that Ger Doherty had to push away, the rebound fell to Vinny Faherty, but he hooked the ball inches wide.

John Sullivan was guilty of missing a guilt edged opportunity in the 73rd minute, Kevin Devaney flighted a deep cross to the back-post, which fell perfectly for Sullivan, but he couldn’t steer the ball past Ger Doherty from close range.

There could’ve been a sting in the tail when Derry City midfielder Aaron McEneff cracked an effort in that drew a top save from United keeper’ Conor Winn late on.

Despite owning the possession stakes, United failed to break down Derry City and didn’t overly work goalkeeper Ger Doherty and this match will be regarded as a case of two points dropped as the sides head into the mid-season break.