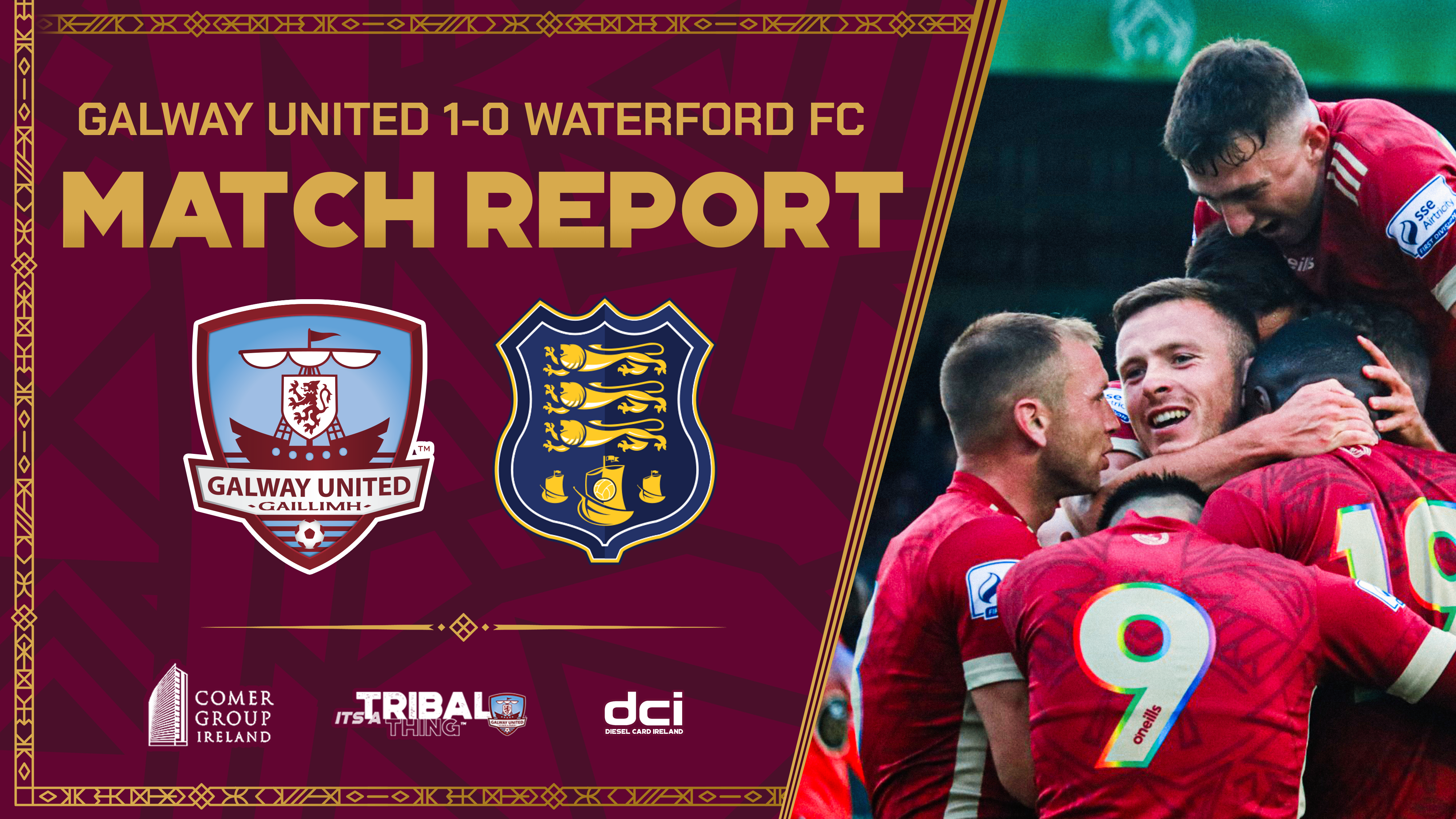 Galway United returned to winning ways with a 1-0 victory against Waterford FC at Eamonn Deacy Park on Friday evening.

Killian Brouder’s bullet header in the 56th minute was enough to secure The Tribesmen’s first home win since defeating Athlone Town 3-0 on May 20. The result also ended third-placed Waterford’s eight game winning streak, which stretched back to April 22.

John Caulfield made three changes to his side as they looked to bounce back from Monday’s disappointing defeat away to Longford Town, with Stephen Walsh, Charlie Lyons and Francely Lomboto coming in for Gary Boylan, Diego Portilla and Wilson Waweru.

It was Lomboto who had the game’s first major opportunity in the fourth minute. The young forward, whose energy and drive set the tone for a much-improved home performance, shimmied past Richard Taylor on the edge of the area before curling a left-footed effort just wide of the Waterford goal.

The two teams exchanged chances in the early stages of the game. First,Walsh sent a header narrowly over the crossbar after connecting with David Hurley’s inswinging corner before Roland Idowu and Phoenix Patterson both went close with powerful efforts for Danny Searle’s side.

The momentum shifted as the opening period progressed, with The Blues looking to assert themselves over proceedings. Idowu forced Conor Kearns into a spectacular diving save with an attempt from the edge of the area before Patterson fired a shot over the bar on the stroke of half-time to send the sides in level at the interval.

The home side took matters back into their own hands in the second-half, and came agonisingly close to taking the lead in the 55th minute through Manu Dimas, whose powerful long-range effort forced Brian Murphy into a spectacular save to tip the ball over the bar for a Galway corner.

It was from the resulting corner that United took the lead in the 56th minute. After coming close to opening the scoring in the first-half, Brouder went one better as he rose highest to nod home Hurley’s inviting corner for his third goal of the season.

The away side started pushing for an equaliser in response to conceding, but were limited to efforts from distance as the Galway backline held firm. Nevertheless, Kearns was still kept busy as he was forced into a succession of impressive saves from dangerous efforts by Junior Quitirna and Tunmise Sobowale.

As the game neared its conclusion, John Caulfield’s side had to dig in as they were forced to withstand significant Waterford pressure. The biggest chance for the away side came in the 71st minute, as a scramble in the box ended with Brouder getting back onto the line to block a goalbound header from Killian Cantwell.

The Blues kept pushing until the end in hopes of hitting an equaliser, but the home side, backed by a vocal support at Eamonn Deacy Park, held out as they secured the win and tightened their grip on second place in the League of Ireland First Division.

The victory sees United pull seven points clear of third-place Waterford, who have a game in hand. The Tribesmen also stay within four points of first-placed Cork City in the First Division title race.

Next up, Galway United face Cobh Ramblers at home on July 8 at 7:45pm local time.