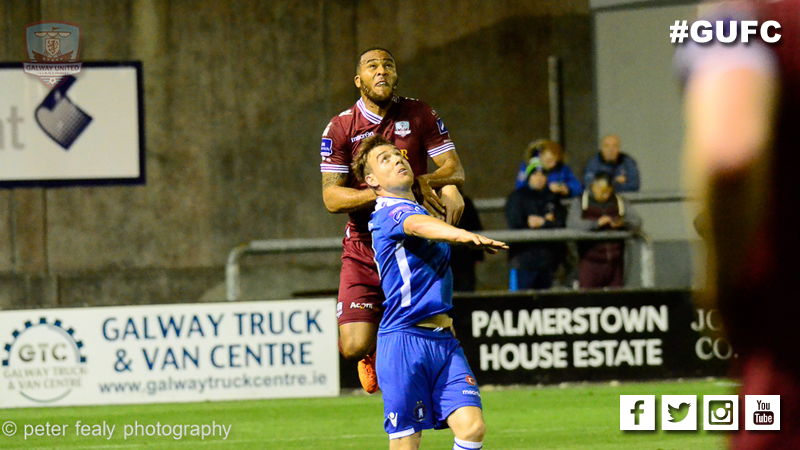 Galway United were dragged back into the relegation mire after turning in one of their worst performances of the season against Limerick FC at Eamonn Deacy Park.

The visitors gameplan worked, they penned the Tribesmen in, pressing high up the pitch and they wanted it more on the night.

The first minute gave an insight of things to come, when Conor Winn sliced a back pass from Stephen Walsh, Vinny Faherty pounced on the loose ball before firing low from a tight angle, Winn made amends, getting back to scoop the ball off the line. It was almost a calamitous start to the game for the hosts and that nervousness at the back resonated throughout the game.

Limerick full-back Sean Russell raided forward, beating two United players before zipping a cross to the back post where Ian Turner met the ball with a firm header but he couldn’t guide his effort on target.

Gary Shanahan had an opportunity to grab an opener after he was played clean through on goal, but on his weaker left foot, his low shot lacked the power to trouble Freddy Hall.

Limerick wingers combined in the 11th minute when Ian Turner skinned Marc Ludden, Turner then picked out Dean Clarke, who rose highest in the box but his header was straight at Conor Winn.

Limerick grabbed an opener after Colm Horgan inexplicably gave away possession deep in his own half, the ball was then fed to Vinny Faherty, who stepped inside Sam Oji’s tackle before planting the ball in the far corner, out of Conor Winn’s reach.

Jake Keegan did his utmost to pull United level, the American swung a probing cross into Limerick’s box which caused panic, Gary Shanahan pounced on the ball but he couldn’t beat Freddy Hall from close range after a scramble.

Busy Limerick midfielder Lee Lynch then drilled a shot across goal, Winn got the midas of touches to the ball, Vinny Faherty stretched but he couldn’t get the connection required to add to his goal tally.

Dean Clarke stepped inside Colm Horgan’s challenge before curling an effort destined for the far corner, United’s custodian got his finger tips to the ball, pushing to safety.

After a shambolic first half showing, United’s performance improved slightly in the second half and Sam Oji grabbed a leveller on the hour mark. Ryan Connolly swung a corner in, there was a goalmouth scramble before Oji turned the ball home.

Limerick re-took the lead however and the complexion of the game changed entirely. The Blues punished the home sides poor concentration levels with a quick free-kick, Ian Turner stepped inside a challenge before shooting powerfully into the roof of the net with a decisive finish.

Turner, full of confidence, then cracked a powerful low effort from 20 yards, Conor Winn batted the ball away and the danger was cleared.

Vinny Faherty then grabbed the insurance goal for Limerick with 9 minutes remaining. Ian Turner found himself in acres of space on the right wing, he crossed to Faherty, who was totally unmarked, and his diving header found the back of the net.

Worryingly, with the exception of a 15 minute spell early in the second half, Limerick dominated proceedings and United must now travel to league champions Dundalk on Friday night in search of a badly needed result.