A 13 minute hat-trick from Padraic Cunningham saw United through to the second round of the EA SPORTS Cup.

Mayo substitute JP O’Gorman pulled a consolation back in the second half but it mattered little as United cruised to a convincing win at Eamonn Deacy Park.

Cunningham made an immediate impact in his first start of the 2016 season. In the third minute, he drove at Mayo’s back-line before unleashing a low drive from 20 yards that nestled in the bottom corner.

Cunningham pounced for a second when he scrambled the ball home from close range after Eric Foley delivered a probing corner-kick.

His 13 minute hat-trick was complete when Conor Melody located Cunningham in the box after making a marauding run down the left wing and the striker showed a cool head, blasting powerfully past Mayo ‘keeper Mark Duffy at his near post.

The Headford native was hungry for more goals but Duffy thwarted both of his efforts in the 21st and 25th minute. 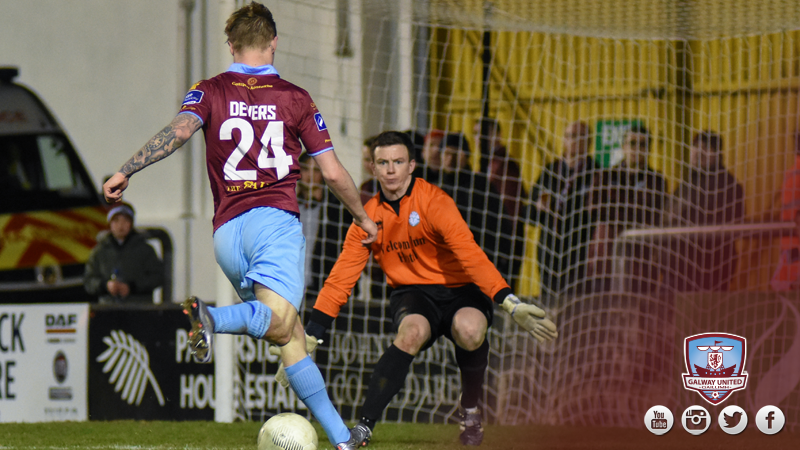 On the hour mark, netminder Duffy did well to get a strong hand to Cunningham’s volley from the edge of the box.

In the second half, Cunningham continued from where he left off and he was very unlucky not to grab a fourth goal three minutes into the half, again Duffy came to Mayo’s rescue.

In the 62nd minute, Mayo substitute JP O’Gorman did well to pull a goal back when he slipped the ball under Kevin Horgan after Conor Byrne played him through on goal.

Mark Duffy produced another wonderful save with 15 minutes to go when he got a strong hand to Eric Foley’s goalbound free-kick but the damage was done in the first half and United progressed to the next round.