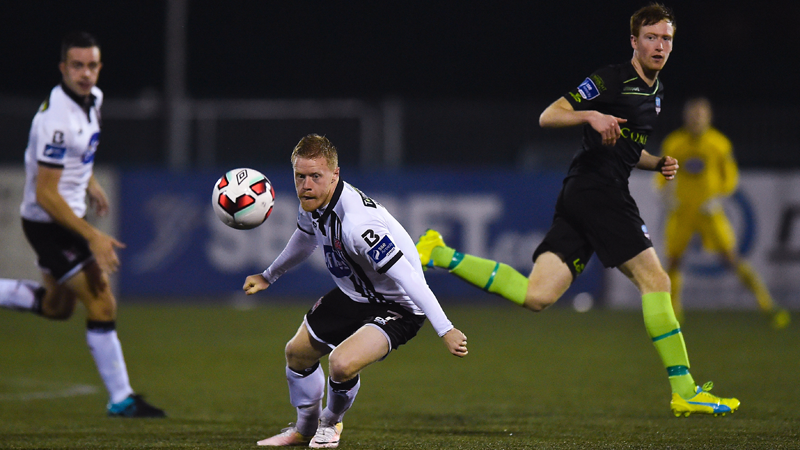 Galway United concluded their 2016 SSE Airtricity League season with a 4-1 loss at the home of champions.

Dundalk controlled the first half and the Lilywhites held a comfortable 3-0 lead going in at half time, the second half saw a vastly improved United performance, captain Ryan Connolly pulled a goal back but the Ciaran Kilduff extended Dundalk’s lead in the 92nd minute.

Attentions now turn to the appointment of a new manager and preparing for the 2017 season for United.

Dundalk started brightly at Oriel Park and Ciaran Kilduff connected with a cross from the left but he couldn’t direct his header on target.

Padraic Cunningham went to close to giving United the perfect start, the young striker turned a Dundalk defender brilliantly before being faced up by Gabriel Sava but the former Drogheda United keeper was equal to his low shot.

That was as good it got for Galway United in the first half, an onslaught of attacks followed from Dundalk. David McMillan forced Conor Winn into pushing the ball onto the crossbar, then Dean Shiels fired Dundalk in front, the Northern Irish winger shot across Conor Winn into the far corner after Ciaran Kilduff flicked the ball into his path.

McMillan was denied by Winn once again when McMillan peeled away at a corner before angling a shot at Winn’s near post but he got down to save.

Former Galway United defender grabbed a second goal for Dundalk in the 21st minute. Barrett found himself in possession over 30 yards from goal and he tried his luck, unfortunately for Conor Winn, he spilled the ball into his net.

United defenders then combined from a corner, Kilian Cantwell headed the ball back across goal for Stephen Folan, who directed his header on target, but Sava batted the ball away.

On the half hour mark, Robbie Benson stormed into United’s box and he got goalside of Stephen Folan, instead of shooting, he tried to set up Ciaran Kilduff, but United scrambled the ball away.

Another good team move from Dundalk produced their third goal, Dean Shiels played a deft one-two and he chipped the ball over Conor Winn to leave Dundalk in command at the interval.

Ten minutes into the second half, United got a lifeline. Ryan Connolly benefited from some slack Dundalk defending, his first shot was well saved by Gabriel Sava but he pounced on the rebound to roll the ball into the net.

United had two chances to grab a second but the end product was not there. A ball over the top sent Vinny Faherty running down the right, Gary Shanahan peeled away from his marker at the back post and Faherty attempted to find Shanahan but Sava anticipated the danger and gathered the ball. Then a good move between Byrne and Devaney ended with Devaney firing too powerfully over Sava’s upright.

Ciaran Kilduff sprang the offside trap and tried to round Conor Winn but he was denied when United’s keeper’ got a hand to the ball.

Kilduff did eventually get on the scoresheet in the final minute of injury time, he found himself one-on-one with Conor Winn once again but this time he opted to slide the ball into the corner which drew a pitch invasion from Dundalk supporters.