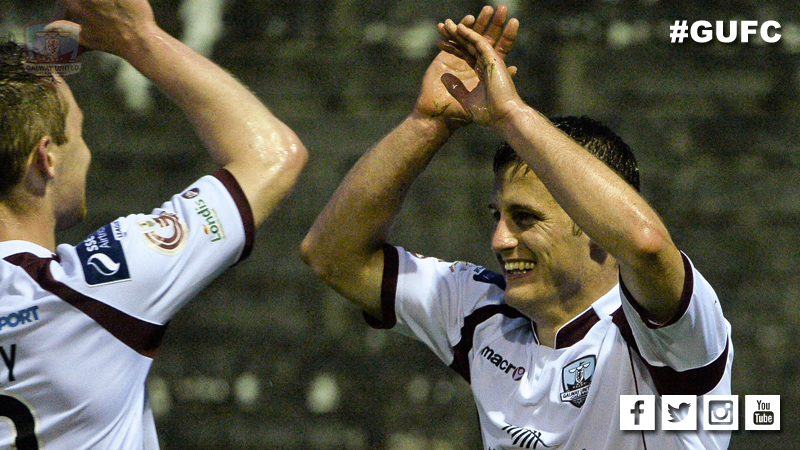 An understrength Galway United side produced a gutsy performance on the banks of the Camac, but a harsh red card for Conor Winn swung the game in the home side’s favour.

Tommy Dunne made three changes from United’s loss against Bray Wanderers and there was also change in shape. United reverted to a 4-4-2, with Stephen Walsh partnering Padraic Cunningham up front.

St Patrick’s Athletic’s biggest threat was Conan Byrne and it was the St. Pat’s winger who set up the opening goal for the home side. Byrne ghosted past Colm Horgan on the wing, before squaring the ball to Chris Forrester, who had the simple task of tapping the ball home from close range.

United sliced the home side open three minutes later, when Stephen Walsh played a ball in behind and Jake Keegan beat the offside, before firing past Brendan Clarke at his near post.

Byrne was guilty of missing another glorious chance when he was played through on goal, but once again, Winn had the measure of him.

St Patrick’s Athletic frontman Jamie McGrath showed some neat footwork in a tight area, before creating space for himself to shoot, but Winn gathered at his near post.

Jake Keegan should’ve grabbed his second goal of the night when Gary Shanahan delivered an inch-perfect cross to the back post, but the American headed the ball inches wide of the upright.

United were rocked ten minutes into the second half, when Conor Winn was given his marching orders by referee Robert Harvey. Conan Byrne pressured Winn into a harried clearance, the ball deflected off the St. Pat’s winger and as he raced to chase the ball, there was a slight touch on his shoulder in the box from Winn and Byrne fell dramatically. Despite United having players on the cover, Harvey showed Winn a straight red and Conan Byrne fired the penalty past substitute goalkeeper Ger Hanley.

After Winn’s sending off, United sat deeper and St. Patrick’s Athletic struggled to penetrate, so they resorted to efforts from long range. The Saints midfield duo of Killian Brennan and James Chambers both called Hanley into action but he kept them at bay.

St. Patrick’s Athletic substitute Sam Verdon turned quickly on the ball before getting a snapshot away that was destined for the bottom corner, but Ger Hanley tipped the ball around the post with a fingertip save.

The Saints did eventually grab a third goal in injury time with United tiring badly. After initially making two excellent saves, Ger Hanley could do nothing to stop Conan Byrne applying the finishing touch at the back post, after a scramble in United’s box.