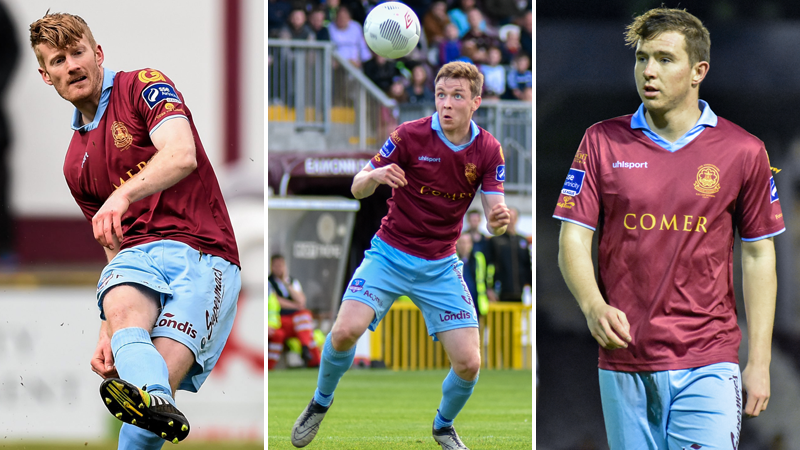 Galway United are delighted to announce that Paul Sinnott, Conor Melody and Padraic Cunningham have signed new contracts with the club.

The trio have penned new deals until the end of the 2017 SSE Airtricity League season.

Paul Sinnott is one of United’s most experienced campaigners, the 30-year-old has made 191 appearances for Galway United over his seven seasons at Eamonn Deacy Park, scoring 4 goals in the process.

Padraic Cunningham has made 54 appearances since moving to United in 2014, scoring 11 goals. The 20-year-old endured an injury-hit season in 2016 but he showed supporters glimpses of the ability and potential he possesses over the last three seasons at Eamonn Deacy Park.

Paul Sinnott is a vastly experienced player, who has displayed his solidity and versatility over the years, operating at right-back, centre-back and in the heart of United’s midfield.

Galway United manager Shane Keegan feels Sinnott could be very important to the Tribesmen in 2017.

“Paul is a thorough professional, I’ve spoken to a lot of people since I’ve arrived at the club and everyone has spoken in complimentary terms about Paul’s personality and his approach. His experience will be invaluable to us, he’s such a sensible head and natural leader.

“Paul is not one of those big egos who is going to say this is my position and you have to play me here. He’s the kind of player that just loves playing football and he wants to be in the team each week and I’m very pleased to add him to my squad.”

Conor Melody produced a number of eye-catching performances for Galway United in 2016 which culminated in him being voted Young Player of the Year and Shane Keegan is confident he can continue his development at Eamonn Deacy Park.

“Conor was a constant thorn in my side last season when we faced Galway United. He was man of the match against Wexford Youths in Eamonn Deacy Park and then he went on to score at Ferrycarrig Park later in the year.

“He’s a really technical midfielder, his game intelligence, vision and movement is so good and so clever. He’s a real thinker but also quite instinctive at times.

“He’s a young player with massive potential. The fact he can start in a number of positions is going to give him a real chance of being a big part of things next year.”

Shane Keegan insists 2017 could be a big season for Padraic Cunningham.

“You’re looking at a player, if he fulfils his potential, he has the possibility of being an absolute star. The only thing that can stop him fulfilling that potential is the failure to reach his physical peak. He’s a player who will be getting to know Johnny O’Connor (Strength and conditioning coach) very well over the next couple of months, but that’s what he wants.

“The fact that Padraic is different to our current strikers is a huge plus for me. We have three very different strikers, with differing styles of play. Padraic has the potential to be the breakthrough star of 2017 if he fulfils that potential. He’s got all the looks of a player that’s going to do everything that’s required to get the most out himself next season.”