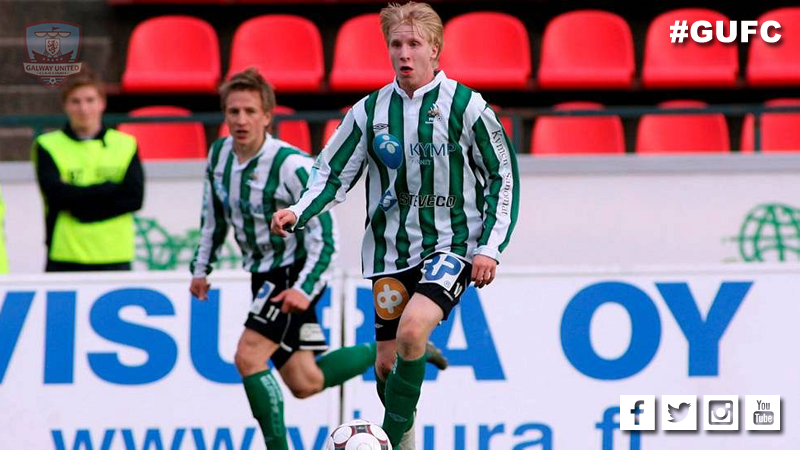 Galway United are delighted to announce the signing of Tomi Saarelma.

Saarelma played his youth football at Stamford Bridge with Chelsea before playing senior football in Switzerland, Estonia, Germany and Finland.

Galway United manager Tommy Dunne feels the Scandinavian will add some invaluable quality and experience to his squad in the run-in.

“Tomi has great experience from playing in Switzerland and Finland. He’s a wide player and technically he’s very good. It was important for us to bring him in and to strengthen our squad.

TOMMY DUNNE: “Tomi is tidy on the ball and he’s quick, he would have a good knowledge of the various systems that we employ. He’s hungry to do well for the club and we’re delighted to have him on board.

“He’s got to play some games to get a bit of sharpness back but we feel that he has come in and integrated very well in training, he’ll go straight into the squad for Longford Town at home on Saturday. We hope he can settle in quickly and make an impact with us.”

The former Finland U19 and U20 international spoke to www.galwayunitedfc.ie shortly after penning a deal with the Tribesmen.

“I’ve only been training this week, but hopefully I can be involved in my first game at the weekend. I just want to help the team to win, that’s my only goal. How many minutes I play isn’t in my head yet.

“I haven’t played so many games recently because I’ve been injured but I’m ready to play now, that’s why I’m here. Match sharpness will come.

“I’m really looking forward to the Cup Final in the middle of this month, it would be huge to help the team. It’s what football is all about for me. It would be amazing to help the club to win its first Cup in a long time.

“For now. I’m concentrating on Longford Town on Saturday and I can’t wait to get started at Galway United,” he concluded.