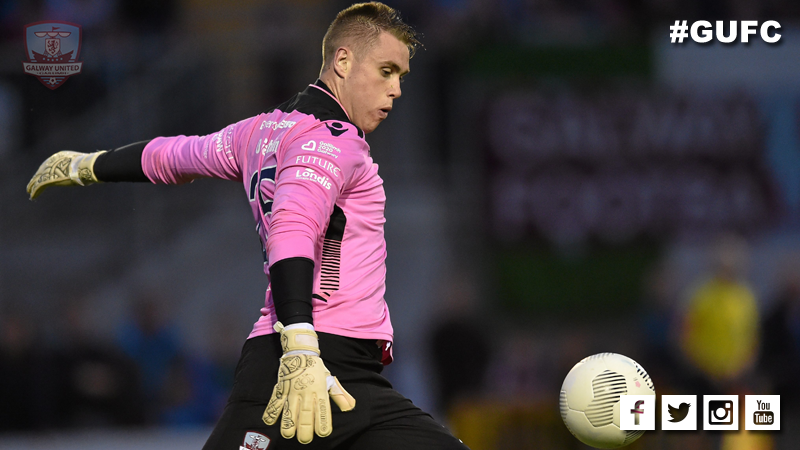 Conor Winn is the latest player to extend his stay with Galway United.

The 23 year old goalkeeper has signed a new deal until the end of the 2016 season.

Winn joined Galway United from Finn Harps at the start of the 2015 season. He established himself as the clubs number one, making 20 appearances between the posts.

Speaking to www.galwayunitedfc.ie shortly after putting pen to paper, Winn, recently voted Player of the Month for August,  said he was determined to bring his impressive end-of-season form into 2016 with Galway United.

“I’m hoping to hold onto the jersey for next year,” Winn explained.

“It was great that Tommy Dunne wanted to sign me so early and it shows that he’s got an interest in me and that he’s keen. To be fair, I enjoyed my football a lot more this year. We’ve got a good bunch of lads at the club and I think the club has potential to do well.

“I think our goal should be to get at least 6th next season, we’re well capable of achieving that, if we can keep the same squad, add a few experienced players and have a good pre-season. We play good football, so hopefully we’ll take a lot from this year and learn from the experience in 2016.

“I came back unfit last season, I had to work my socks off to get back into the team. To be fair to Connor Gleeson, Ger Hanley and Kevin Horgan, we were pushing each other all the way. Even when I got sent off against St Pats, it took me a while to get my jersey back. There is serious competition at the club and I expect that to continue next season but I’m determined to keep my place in the team.”

Commenting on the news, Tommy Dunne praised the positive impact Winn made at Eamonn Deacy Park.

“Conor was one of our most consistent performers towards the end of the season.

“He had to be patient, he had to bide his time, but when he got his chance, he took it and he got his rewards. He’s put a lot of work in with Mark Cobey (Goalkeeping coach) and he’s made huge improvements as the season has progressed.

“I’m delighted he’s signed a new contract. There is more in Conor and hopefully he’ll continue to improve with us. He’s done very well and we hope he continues in the same vein in 2016.”