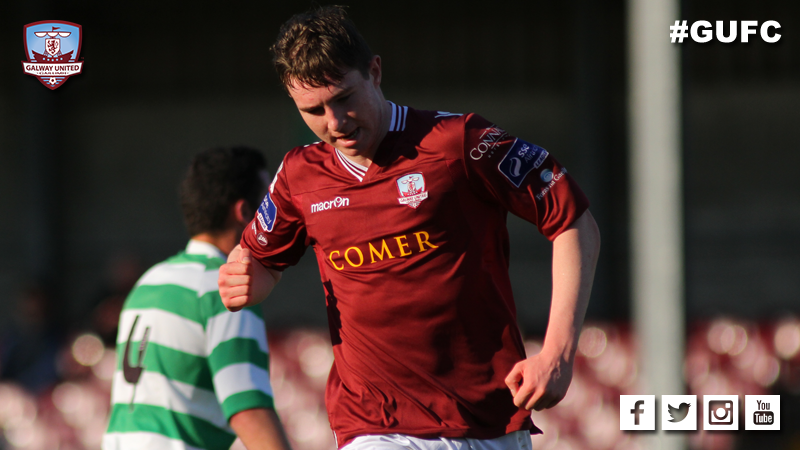 Galway United are delighted to confirm that Padraic Cunningham has signed a new contract with the club.

The 18 year old striker has extended his stay with United until the end of the 2016 season.

Cunningham made 25 appearances for Galway United in 2015, scoring 7 goals and he contributed 8 assists.

At the beginning of August, Cunningham’s season was ended after he sustained a serious knee injury in training but the young striker has been working hard in the background with the clubs medical team and he was pleased to come to an agreement with the Tribesmen for 2016: “When I met with the club, I was delighted to get things sorted so quickly. I knew my injury was long-term, so it’s a relief that I can now concentrate on my rehabilitation and look to come back even stronger next year.

“I really came into the frame this season, I didn’t expect to be playing as much football as I did. It was a huge step up for me, the standard of opposition was a lot higher and I enjoyed the challenge. The knee injury came at a bad time, I felt I was building up momentum, but that’s football,” Cunningham said.

“I’ve been working hard with Emmett Hartigan (physio), I’m back doing light training now. I did the warm-up against St Patrick’s Athletic so I feel I’m making progress. I should be fit for pre-season and hopefully I can come back firing.”

Looking ahead to next season, Cunningham told www.galwayunitedfc.ie that an improvement is required at Eamonn Deacy Park: “The main objective for this season was to stay up, next year I think we should be aiming a lot higher than that. I’d be hopeful that we can break into the top six and hopefully do well in the Cups. It’s important that we keep our squad intact and avoid injuries.”

Galway United boss Tommy Dunne insists that the sky is the limit for Cunningham if he continues to work hard:

TOMMY DUNNE: “Podge is an up-and-coming player for us, he’s still got a lot of learning to do.”

“He’s only 18, he’s still learning his trade, but we do think that he has a lot of capabilities and possibilities, he’s a very exciting young player. I’m hoping that when he returns that he will be even fitter and stronger next season after he goes through a thorough pre-season. We want to push him on even further, he’s a dynamic striker who gave some very experienced centre-halves torrid times this season.

“You can see the progression in him since he joined the club. The level of training that he is doing is paying off and he was really enjoying his football. Now he’s got to knuckle down and continue to work hard with us. I’ve no doubt that if he works with our staff and listens to the advice he receives, he will make a career for himself in the game. We’re very pleased to retain him for 2016.”