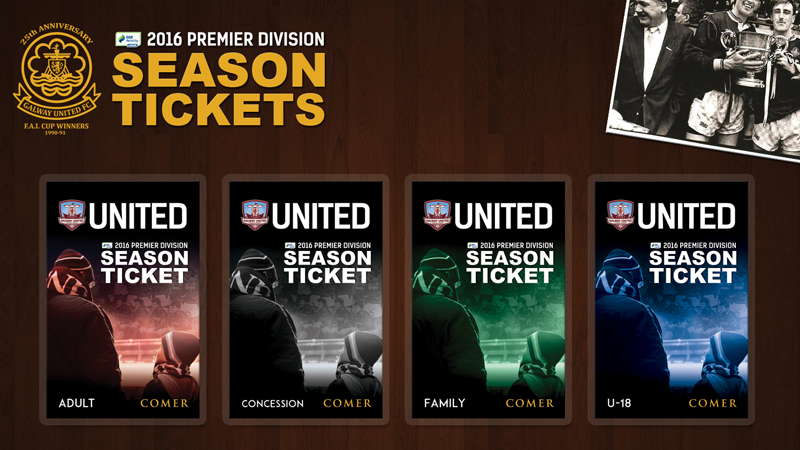 2016 Season Ticket prices have been frozen! Galway United are pleased to present supporters with Season Ticket prices that will offer huge savings compared to paying in on a match-by-match basis, amounting to a total of at least five FREE games! An adult Season Ticket holder will see 16 home Premier Division games for less than €10 per game in 2016.

Eamonn Deacy Park will continue to be a family friendly ground in 2016. Galway United are offering supporters massive savings on a family Season Ticket that will gain two adults and three second level students admittance for a vastly reduced rate.

“We felt it was important to thank our supporters for their unwavering support in 2015 and I’m hopeful that all of our supporters will renew their Season Tickets and that we can add to our growing fan base in 2016.”

“We are trying to progress the club whilst also keeping the Season Ticket prices as low and fair as we can. The value for money represented in purchasing a Season Ticket compared to paying in on a match-by-match basis means that purchasing a 2016 Galway United Season Ticket is a must for supporters across the City and County.”

Supporters purchasing student Season Tickets will be asked to present valid identification. Galway United retain the right to refuse to sanction any sale should they suspect that a supporter has knowingly given false information relating to their age.

Digital match programmes on sale now in the club shop – €2. All proceeds go to Jigsaw, our charity partner