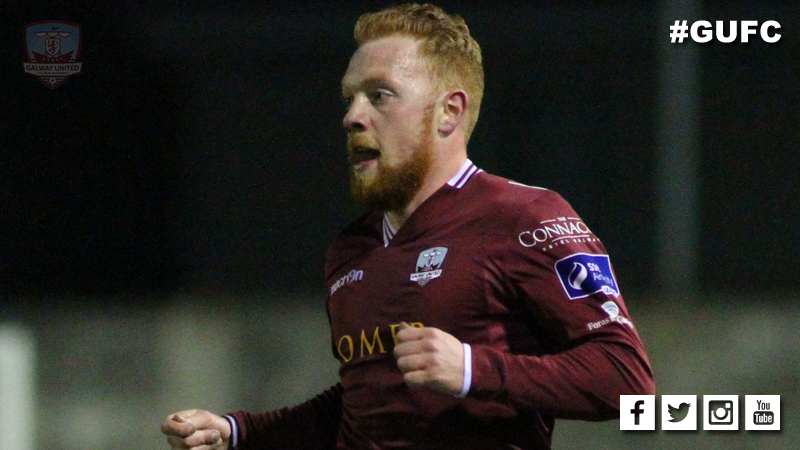 The former Sligo Rovers midfielder set up both of United goals, delivering an in-swinging corner kick that Ger Doherty flapped at and Padraic Cunningham swooped in and applied the finishing touch.

The 23 year old is looking forward to United’s double header against the Gypsies at Eamonn Deacy Park and he insists the Tribesmen should be confident heading into both clashes.

“There was a really good buzz in training all week,” Connolly explained.

“We knew going up to the Brandywell that we were well capable of getting the points so we went up there and got the job done.

“Training’s been good this week and we’re all looking forward to the game on Friday night now.

“We know Bohs are flying, they’ve had a good start but we expect to win every game at home. We’re aiming for two wins.”

The sides have already met once this season with Bohemians coming out on top at Dalymount Park, two set pieces undone United and experienced defender Anto Murphy punished the away sides lax marking on the night.

“Bohemians are a well organised team,” was the Mayo man’s assessment.

“When we played them at Dalymount Park, they didn’t seem to play much football but they were well organised and dangerous from set pieces.

“We feel if we match them and we’re organised ourselves and we’re tight at the back, we can get the job done.”

After two consecutive away wins, confidence is high and Connolly is hoping Galway United can pick up their 3rd home league win of the season on Friday night.

“It’s two big games and we’re hoping the supporters will get out in big numbers and get behind us on Friday and on Monday.

“The more results we get right, the more support we’ll get and we’ve been doing that lately. We’ve a chance with who Longford and Derry are playing, to jump two places if we win.

“On Monday, we’ve got the quarter finals of the EA SPORTS Cup and that’s a huge opportunity for us to progress to the semi-final of a cup. All of the lads are looking forward to it and we’re hoping the supporters will come out in their numbers and get behind us against Bohemians.”