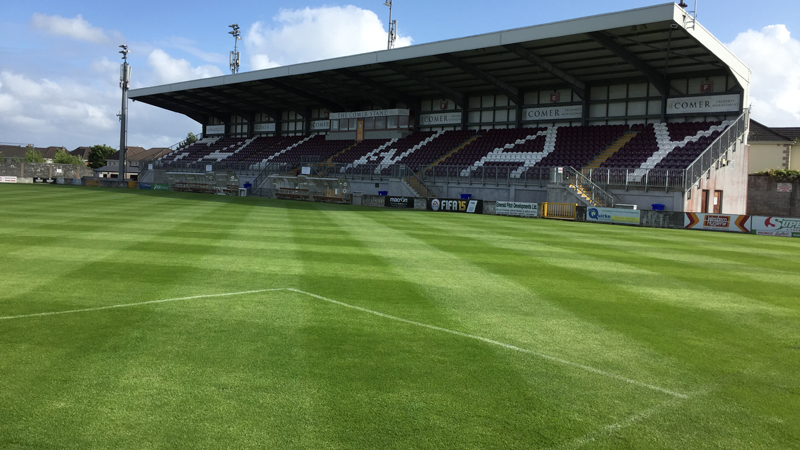 EAMON DEACY PARK, home ground of Galway United Football Club, has won the 2015 SSE Airtricity League Pitch of the Year Award, following an inspection by the Irish Institute of Sports Surfaces (IISS). This is the first time that the ground has received this accolade in its revamped format, although Groundsman Noel Connolly did receive the accolade of Groundsman of the Year in 2007 and 2008.

The winner of the award was announced following nominations by SSE Airtricity League referees and players, in association with the Professional Footballers Association of Ireland.

The award, which is organised by the FAI and IISS, and sponsored by Greenday Environmental Services, will be presented at a function prior to the FAI Irish Daily Mail Cup Final at Aviva Stadium on November 8th.

IISS Managing Director Donal Kearney said: “The Pitch of the Year Award has been created to highlight the hard work of the League clubs and their grounds staff. We hope that this award provides due recognition which will encourage them and others in the league to continue to work towards improving the standards of their playing surfaces which plays a key role into the playing performance of the pitch, the players and to reducing player injuries. Congratulations to Eamon Deacy Park on their achievement and our thanks to Greenday environmental for their support.”

Eamonn McShea CEO of Greenday Environmental, who offer a comprehensive range of drainage services for domestic and commercial sectors throughout all Ireland, added: “Greenday Environmental are delighted to support this award in recognition of the hard work which Clubs and their Groundsmen in the SSE Airtricity League put in all year round.”

Fran Gavin, Director of the SSE Airtricity League, said: “I would like to congratulate the Galway FA, Head Groundsman Noel Connolly and Galway United FC on winning this award. It is appropriate that Eamon Deacy Park has won this award, and there is no doubt that it would not have been achieved without the tireless work of the staff at the ground who have maintained the pitch to the highest of standards throughout the entire year. I would also like to thank the players (through the PFAI) and the referees for their assistance in this award. “

Joe Keating, Chairman of the Galway FA, said: “The Galway FA is delighted to have won the SSE Airtricity League “Pitch of the Year” award this year. This award is a reflection of our determination to place the condition of the playing surface at the top of its list of priorities at Eamon Deacy Park, but most of all it is a credit to the staff and volunteers who work tirelessly to keep the surface in top condition, and I would like to congratulate them.”

Galway United FC Chairman, Jonathan Corbett remarked: “We are delighted that Eamon Deacy Park has received this prestigious award. We would like to congratulate our landlords and colleagues in the Galway FA, whose ground staff do excellent work in maintaining the pitch to such a high standard.”

The competition began in 2007 following the takeover of the National League by the Football Association of Ireland. Initially it was known as the Groundsman of the Year Award but was renamed Pitch of the Year in 2009.