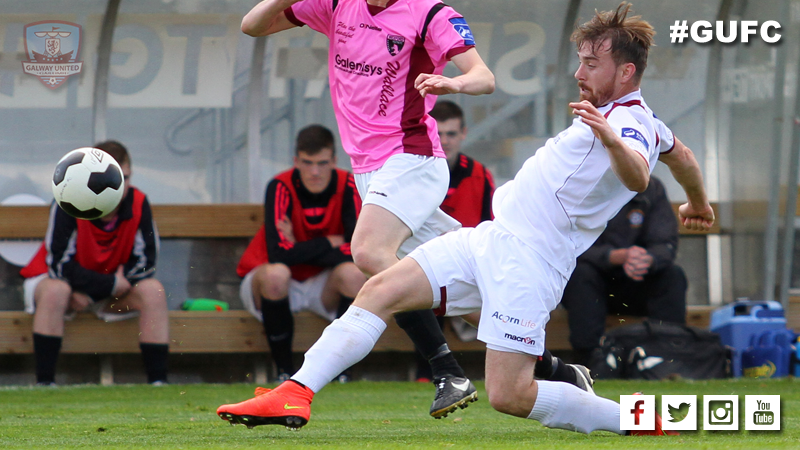 Galway United are delighted to announce the signing of Vinny Faherty.

Faherty returns to Eamonn Deacy Park for his third spell with the club after a season at the Markets Field with Limerick.

The 28 year old striker has signed a two-year contract with Galway United.

Faherty scored 12 league goals for Limerick in 2015 and his goalscoring exploits with the Super Blues led to a Player of the Month award in August.

Shortly after putting pen to paper, Faherty commented: “I’m a Galway lad, it’s always nice to return home and I see myself in Galway long-term,” he explained.

“It was tough to leave Limerick. I was happy with my goal return in 2015, particularly because I only really started playing as a number nine with 13 or 14 games left.

“I think I’m the type of player that if I get chances, I’ll score goals. A lot of my goals were supplied by Ian Turner and Dean Clarke.

Vinny Faherty: I plan on carrying that form through with Galway United in 2016. To be honest, I want to continue to progress at the club, I want to get stronger and work on my sharpness. Hopefully I can improve again next year.

Looking ahead to the 2016 season, Faherty is hopeful that the Tribesmen can continue their climb up the Premier Division table.

“Progression is a necessity. We can’t kid ourselves, the clubs in Europe have much bigger budgets and it will be tight at the bottom. We need a few more experienced additions, but a lot of the players at the club will have benefited greatly from their first year in the Premier Division. The goal has to be moving forward and progressing up the table.

“This was the hardest decision I’ve had to make in football. Limerick offered me a two year contract and I had offers from two other Premier Division clubs, but I’ve been a Galway United fan since I was six years of age. Long-term, Galway was always where I wanted to be and I’m delighted to have signed back.”

“I certainly don’t think we saw the best of him in his last spell with the club. He was struggling with injury but he showed his quality at Eamonn Deacy Park last season, scoring three times against us with Limerick and grabbing 12 goals over the course of the season.

“He’s a very experienced player and a great lad to have around the dressing room. We’re delighted to have him back at Eamonn Deacy Park.”