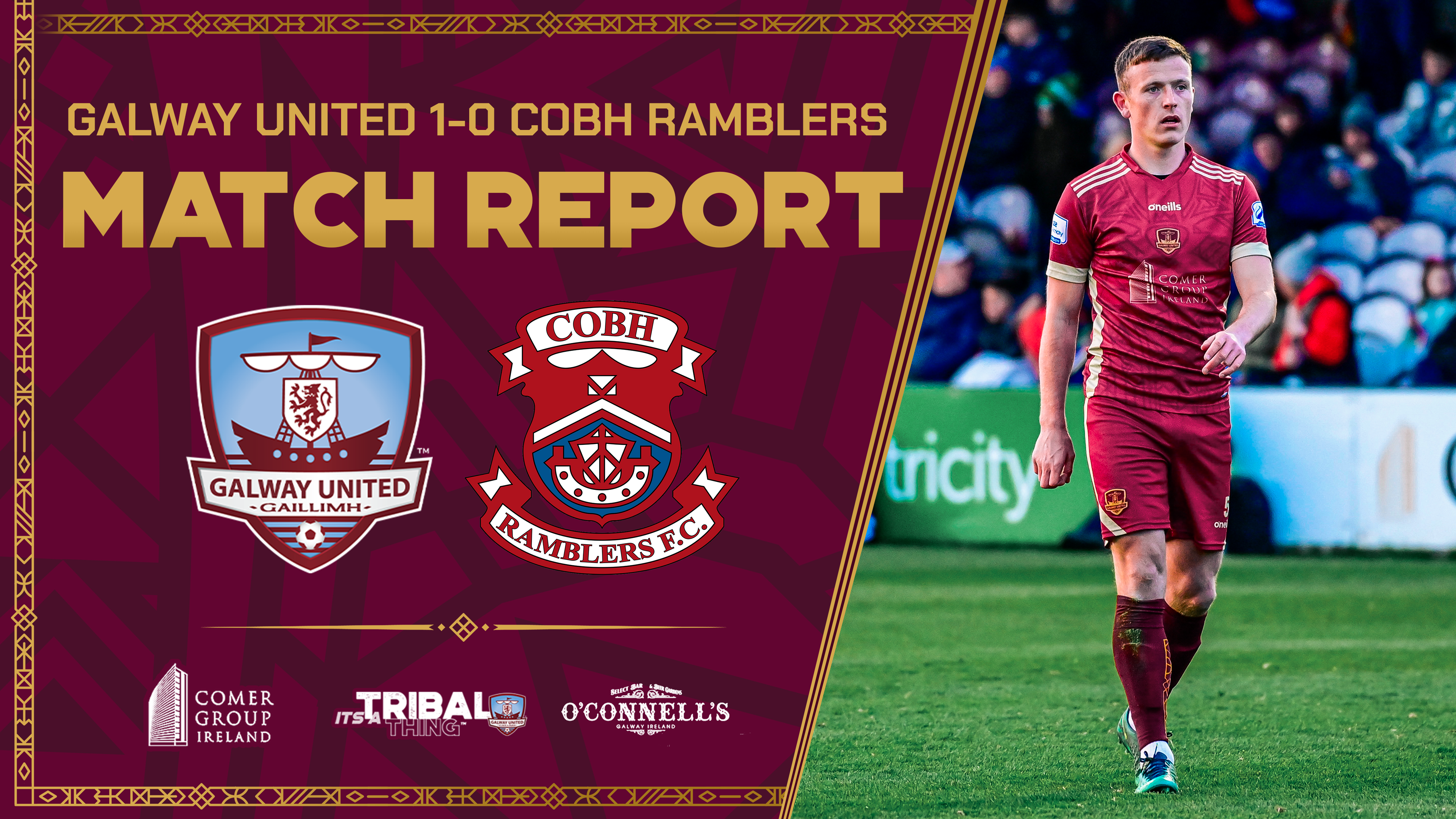 Galway United back to winning ways in win over Cobh Ramblers

Galway United bounce back to winning ways following a 1-0 result against Cobh Ramblers in the first division clash at Eamonn Deacy Park.

Following a couple of missed chances from the Tribesmen, it took a Killian Brouder strike in the 67th minute to settle affairs in Galway.

Galway United almost secured the lead in the opening minute, with Brouder’s short pass to David Hurley, who put a cross through to Manu Dimas, with his headed effort blocked by Daryl Walsh with goalkeeper Andy O’Donoghue receiving the loose ball.

Cobh had their first attempt on goal in the third minute, when Walsh delivered a cross into the box, but the onrushing Conor Kearns was quick to collect the ball.

A well worked move from Mikie Rowe from the by-line, saw the midfielder pass to Wilson Waweru who was brought down by the Cobh defence, with a Manu Dimas follow up pass moments later, finding Conor McCormack, whose effort to the top corner was smartly saved by O’Donoghue.

Galway had the opportunity to take the lead in the 14th minute, following a foul by Walsh on McCarthy, with the resulting Hurley freekick almost falling to the path of Diego Portilla.

A quick counter in the 17th minute saw Waweru and Dimas through on goal with Waweru’s pass failing to find the Spanish striker due to Mbeyo’s interception.

Cobh’s defence eased a sigh of relief in the 30th minute mark, when a looping pass from Ed McCarthy found Waweru through on goal, with his low shot saved by the feet of Bray’s onrushing goalkeeper.

Cobh received the first yellow card of the match in the 35th minute when Darryl Walsh was booked for a high boot challenge on McCarthy.

A loss of concentration from O’Donoghue in the 40th minute, saw the Cobh’s goalkeeper almost gift the tribesmen with his kick almost intercepted by Waweru.

A long pass from Kearns found Waweru two minutes later, with the striker driving into the box, cutting back, before hitting a low shot just wide of the goalkeeper.

With the score line goalless at the break, the home side continued from where they left of with the first chance of the half falling to the side.

McCarthy’s throw- in evaded Cobh’s defence Manu Dimas failing to pounce on the error two minutes into the second half.

An error from Brouder in the 53rd minute gave the visitors an to advantage, McGrath passing to Beineon O’Brien-Whitmarsh on the flanks, with the striker’s cross meeting the hands of Kearns.

A well-worked move in the 57th minute from the home side saw Hurley pass to Rowe who laid the ball into the path of Alex Murphy, his looping effort just met by O’Donoghue.

In the 67th minute however, the pressure finally paid off via a corner. A Hurley cross to the far post found Stephen Walsh, whose lopping header fell to Brouder, who smashed into the net from close range.

Cobh threw more players forward in search for the equalizer.

This almost paid off two minutes after conceding, when a long through pass finding O’Brien-Whitmarsh who raced through on goal before a last-ditch clearance from Brouder saved the home side from conceding.

Cobh almost had a player sent off in the 70th minute, when Frahill pushed Waweru, but the referee opted against dishing a second yellow to Cobh’s defender.

With the away side relying on set piece to level the game, this almost paid off in the dying minute of the game with Abbott cross from a freekick, but the effort was thwarted by O’Connor for a corner.

Despite the late effort from Cobh Ramblers, Galway United held on to victory, securing their second clean sheet of the season.

“It was a difficult game, we knew they would sit back and let us have the ball.

We had chances to win the game, it became a frustrating game because we missed a couple of chances in the first half,