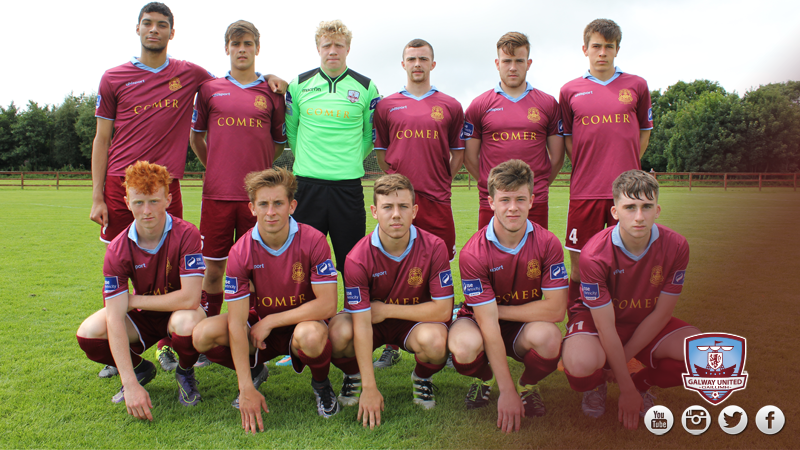 Galway United under-19s continue to impress in the Southern Elite Division and on Saturday afternoon, Johnny Glynn’s side romped to a 6-2 win against Cabinteely at East United’s Ground, a side they lost 2-1 to in April.

The vast improvement in United’s underage side is clearly evident. In their last eight competitive fixtures, they’ve won five, drawn two, and lost only one. Glynn will be aim to bring that form into Tuesday’s Quarter-Final of the Enda McGuill Cup against Sligo Rovers at Eamonn Deacy Park. Kick-off: 7.30pm.

Speaking to www.galwayunitedfc.ie after the Cabinteely game, Glynn felt his side have improved week-on-week as the season has progressed. “We did very well today. We have improved so much since the first five or six games.

“It took us a while for the new players to get to know each other. We didn’t have a fantastic pre-season campaign, we didn’t have a settled training schedule because it’s very hard to get facilities.

“Once the summer came, the training has been much better, the lads have gelled and got to know each other and we’re firing on all cylinders at the moment.”

Two contenders for goal of the season were scored against Cabinteely, firstly by Robert Spelman, who drilled an unstoppable pile driver in off the upright. Then striker Andrew Connolly slammed in his 8th goal of the season with a fantastic volley, which nestled in the top corner, before grabbing a second goal in the second half.

“They’ve gelled, that’s been the key for us. In the final third, our finishing was outstanding today.

“It was two great strikes from Rob Spelman and Andrew Connolly just before half-time, going in at 3-1 probably had a negative effect on Cabinteely. But our players remained focused and they were very good in the second half also.”

United welcome Connacht rivals Sligo Rovers to Eamonn Deacy Park on Tuesday for an Enda McGuill Quarter-Final, kick-off is at 7.30pm. Glynn is relishing the test against the Bit o’Red.

“Tuesday is huge for us. We’re looking forward to it. We went to Finn Harps and came from 2-0 down to win the game in extra time. Sligo Rovers will be tough, I’m expecting a big Connacht Derby.

“The players are really looking forward to it, it’s very important to us.”