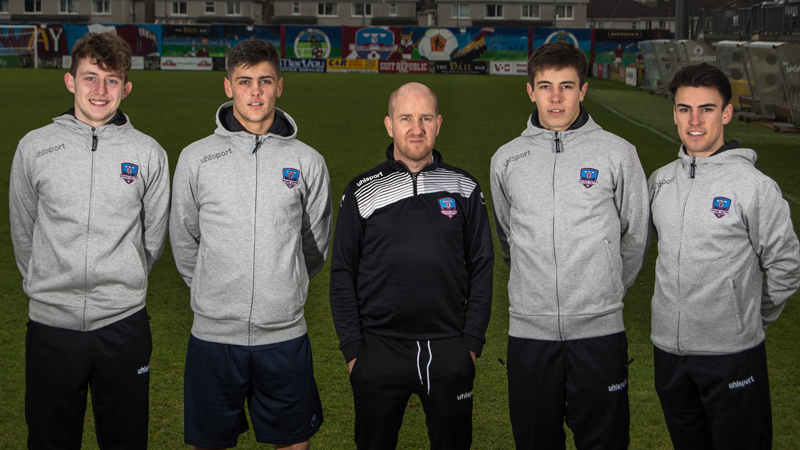 Nugent, Spelman, Kinneen and Conway are graduates of Galway United’s under-19 side, who reached the final of the competition last season. Declan Sharkey moves to Eamonn Deacy Park from Finn Harps.

Galway United boss Shane Keegan hailed the work that Johnny Glynn and Nigel Keady did with United’s under-19s last year and he pointed to the importance of providing a pathway for players at the club.

“When I took over as Galway United manager, one of the first things I did was sit down with Johnny Glynn and I asked him who had been the standout performers in the under-19 squad, the same names kept cropping up” he explained.

“Maurice Nugent was called up to the Irish under-19 home based squad towards the end of last year, which shows the qualities that he has and how highly regarded he is by the international manager Tom Mohan. He’s very athletic, he’s very cool and calm on the ball and he can play in a multitude of positions across the back line.

“Aaron Conway was Maurice’s partner in centre of defence last year, he’s a really fit and powerful player. Aaron is also very confident on the ball, he’s calm and his decision making is excellent. The big thing with Maurice and Aaron, when doing pre-season testing over the last few weeks, they were going right to the end with some of our fittest players. We’re bringing through good players, who are also very good athletes.

“Gary Kinneen is another player that could do very well with us, he’s left footed, a commodity that is highly sought after. He’s very good at getting forward, he has a great delivery of a ball and he’s another player with an excellent attitude.

“Robert Spelman was the under-19 player of the season last year, he’s a player that just wants to take the ball all day and knock it around, he’s another very composed player. He’s got a bit of bite in him, which I like, he’s not afraid of a tackle.

“We’ve brought Declan Sharkey in from Finn Harps. Along with Maurice Nugent, he will be eligible to play under-19 football in the coming season. He has fit in like a glove at first team level with us, he’s a really technical player, who plays a bit higher up the pitch than the four other lads. Declan can get on the ball and make things happen. He’s quite comfortable in attacking positions, playing off the forward.”