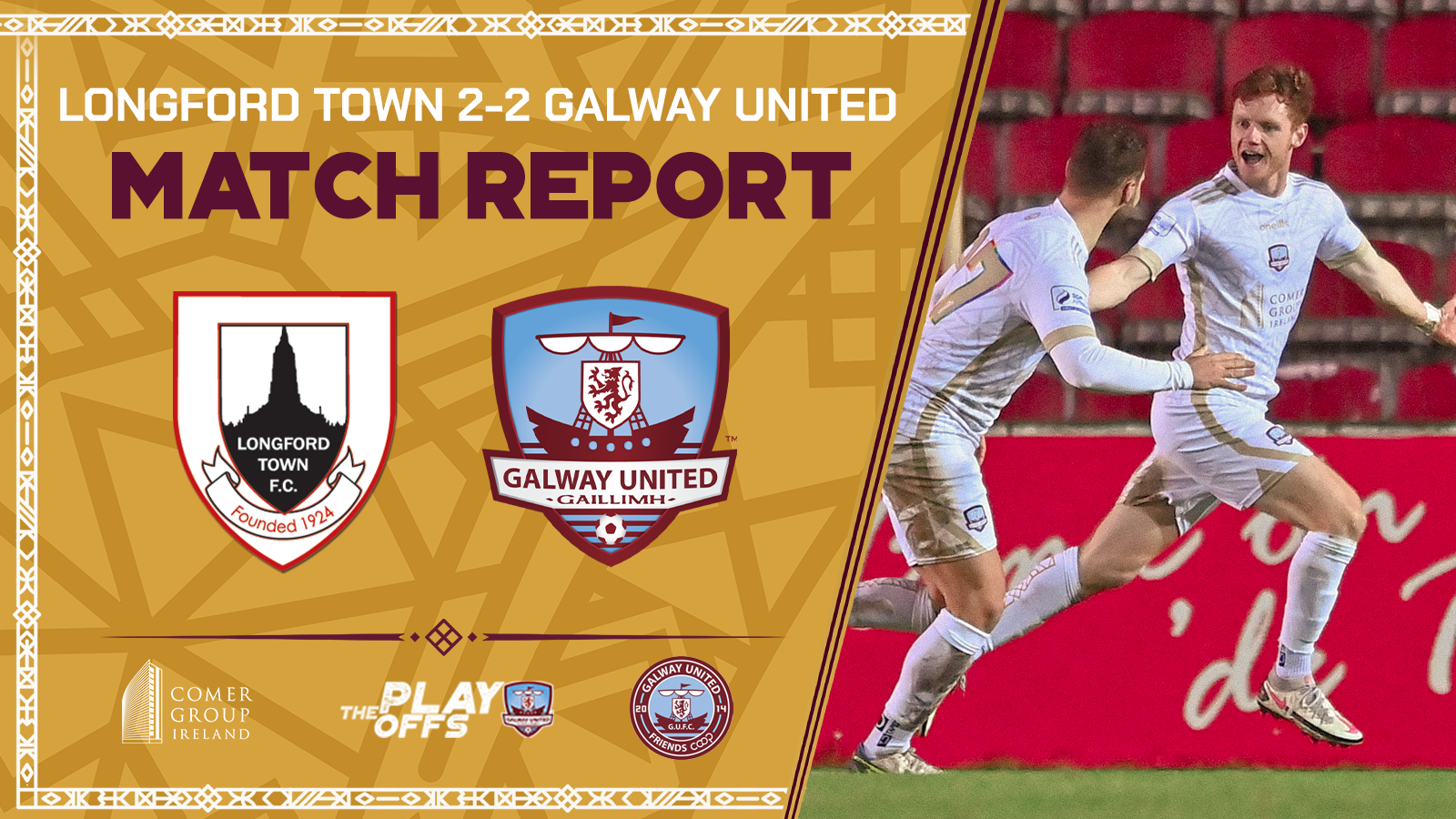 Galway United’s substitutes proved the difference as they played out a 2-2 draw with Longford Town in the first leg of the playoff semi-final on Wednesday evening at Bishopsgate.

Last Friday’s high-scoring contest saw these two teams level after 90 minutes, but Wednesday night’s fixture had more at stake for both sides. It had a lot to live up to, and with it being the first leg of the playoff semi-final, an incredible travelling support was in attendance for United.

Conor Kearns, David Hurley, and Adam Thomas were the only players to keep their names on the team sheet, as John Caulfield opted for a more experienced team to bring the fight to a tough Longford side.

It was a cagey affair in the first few minutes, with Killian Brouder setting the tone with a crunching tackle inside the opening 90 seconds. Longford showed they were ready for a battle however, as they forged out an attack which ended in an effort from Darren Clarke, who stepped inside onto his favoured left foot. Kearns did well to parry the powerful strike, his fingers undoubtedly stinging.

It remained a tight game, with neither side willing to take many risks. Longford had a half chance in the ninth minute when the ball fell to Aaron Robinson inside the centre circle. His speculative effort fell well short, however, and floated into the arms of Kearns. In the words of the commentators, it was “a bit loopy”.

The Tribesmen were relentless in their pressure on the Longford defence and recovered possession on numerous occasions. Stephen Walsh was the target man and frustrated the hosts with his good hold-up play. Michael Barker had enough with 22 minutes gone, and wiped-out Walsh above the knee, which ignited an angry response from the United players as the Longford defender avoided a booking.

Longford took the lead just before the half-hour mark when former United player Jordan Adeyemo intercepted a loose pass across the Galway backline. He set Clarke on a run down the right flank, who cut back onto his dangerous left boot. His floated delivery was headed in by Adeyemo, who gave Kearns no chance.

Longford nearly doubled their lead five minutes later. Adeyemo and Clarke combined once again, and the tricky winger’s cross bounced onto the far post before Max Hemmings knocked the ball out of play to relieve some of the home side’s pressure.

The remainder of the first half featured an increase in tempo from United, while Longford resorted to a more direct style of play. However, United’s pressure did not pay off, as they went in behind at the interval.

The teams returned to the pitch for the second half, with Mikie Rowe replacing Ed McCarthy for United. It was the away side who started on a more positive note, David Hurley played Rowe through, but the disguised pass was gathered by Luke Dennison who was quick off his line.

Hurley and Rowe were a thorn in the side of Longford’s defence from the restart, and it took only four minutes before their work paid dividends. A probing pass along the ground from the United defence fell to Walsh, who deftly touched the ball into Hurley’s path, and his driven cross from the left wing was turned in by Rowe’s outstretched leg.

United didn’t stop there, a throw-in inside the opposition half gave Ronan Manning a chance to float the ball into the box, and Walsh was unfortunate to see his header hit the post.

Longford came back to life after this let-off, however, and quickly restored their lead. Clarke once again was the orchestrator, as his right footed crossed picked out Adeyemo, who turned the ball into the far corner to put the home side back ahead.

In response, John Caulfield turned to his bench once again, with Rob Manley replacing Thomas in an attacking change. The substitution had a near instant impact, as a long throw-in was flicked on by Manley to force Dennison into a great save, but the ball ended up at Rowe’s feet and his poked effort went in off the far post.

The thrill of the game resumed in the final 10 minutes, with both sides battling for the decisive goal and Hurley nearly stole it at the death for United. The midfielder’s stinging effort from the edge of the box with only a minute remaining forced Dennison into a great save.

After a scrappy four minutes of added time, the game finished level, with everything to play for in the second leg at Eamonn Deacy Park on Sunday at 4pm.

Next up, Galway United face Longford Town in the second leg of the First Division playoff semi-finals at Eamonn Deacy Park on Sunday, October 30th, at 4pm.