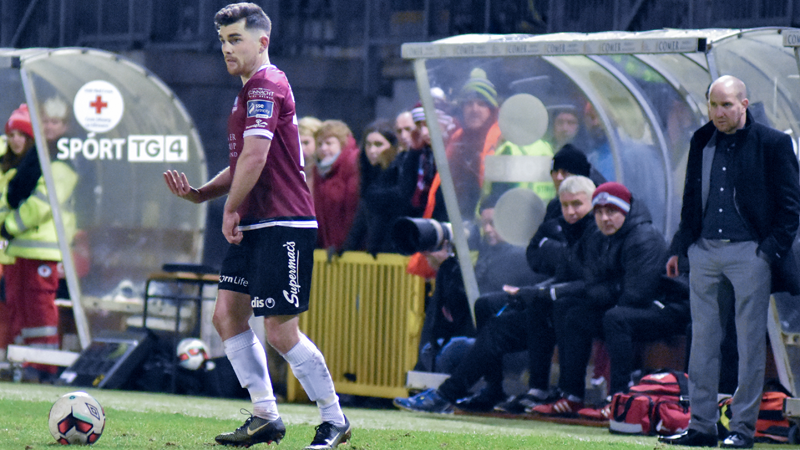 On Friday night, United secured their first point of the season when they drew 1-1 against Finn Harps in Ballybofey.

Sean Houston fired Harps in front midway through the first half but Kevin Devaney levelled matters just two minutes into the second half.

United went on to dominate proceedings in the second half at Finn Park, striking the woodwork on three occasions, but they couldn’t find the winning goal their play deserved. Shamrock Rovers meanwhile lost 1-0 at home to Derry City.

Shane Keegan wants his players to take the positives from Friday’s draw into the Shamrock Rovers game.

SHANE KEEGAN EAGER TO BUILD ON FINN HARPS PERFORMANCE AGAINST SHAMROCK ROVERS
“The Finn Harps performance gives us something to build on. What we need to do now is turn performances into points. We’ve been dominant in two of our opening three games. We created far more chances. We still only have a point.

“Rovers will have a bit of fight and focus in them after the Derry City game. They’re a side with a lot of quality. We feel we put in a good first half against Drogheda at Eamonn Deacy Park on the opening day, but we didn’t reach those levels in the second half.

“The big thing for us against Shamrock Rovers is can we go for the full 90 minutes. We will have spells without the ball, we will need to put in a lot of work and effort.”

LEE GRACE LOOKING FORWARD TO ROVERS TEST AT EAMONN DEACY PARK
“We went in at half time 1-0 down against Finn Harps but we weren’t panicking. We knew that we had to put in a big second performance and we did that.

“We can take confidence from that, we dominated the second half and how we didn’t come away with the three points is a mystery. We put in a serious shift.

“Shamrock Rovers are coming off the back of a defeat against Derry City, we’re going to take the positives from the Finn Harps game into Monday. We’re really looking forward to the game. We know we need to put on a performance in-front of our own supporters.

“I think I’ve done alright so far and hopefully we can keep a clean sheet against Shamrock Rovers on Monday and get another result.”

Kevin Devaney and Conor Melody are both doubts for Monday evening.