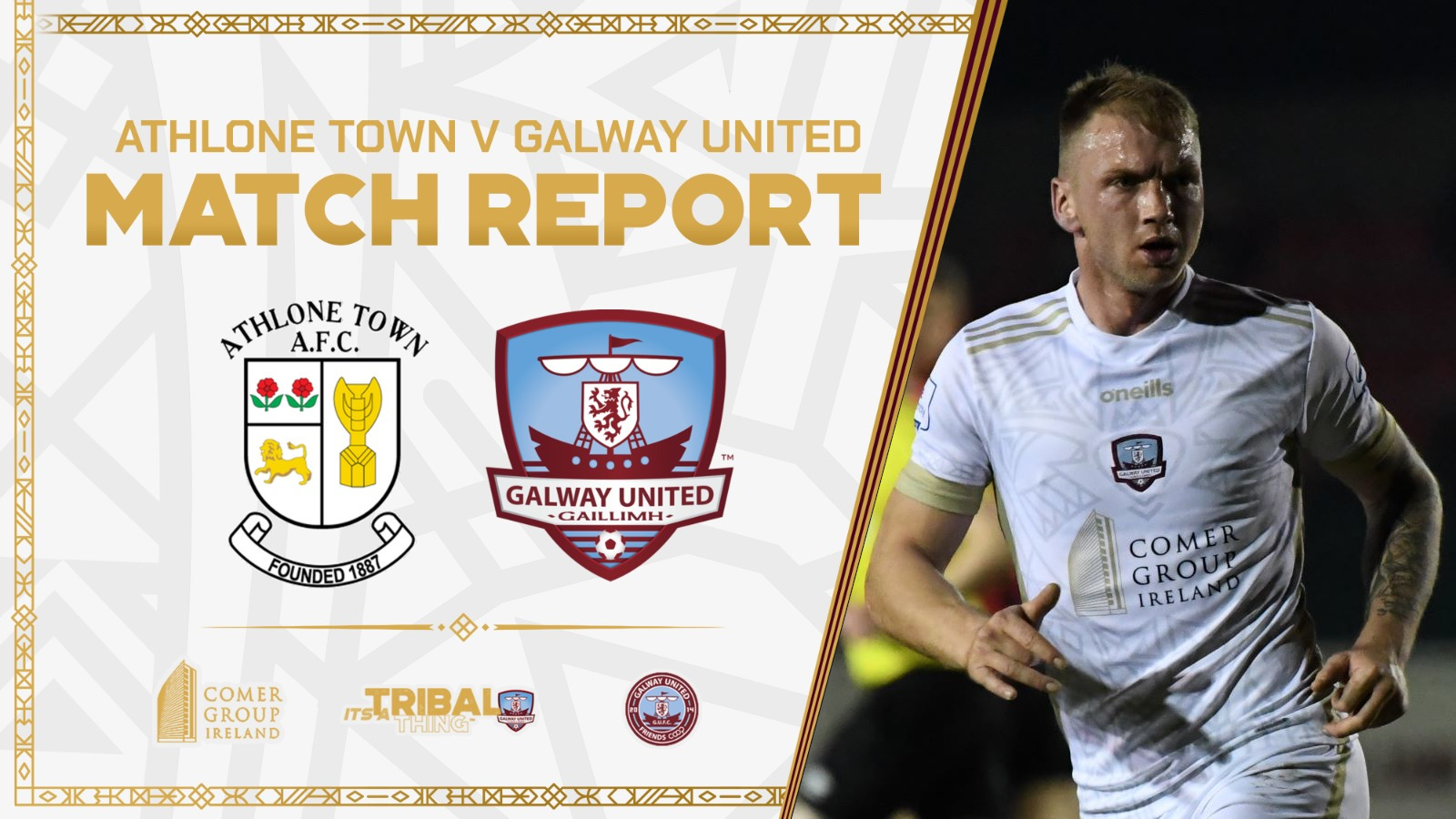 Galway United came away from Lissywollen with their third win in a row, but despite long periods in the ascendancy, they had to sweat through a late Athlone rearguard.

The Athlone Town stadium was not a happy hunting ground for United last season, with disappointing defeats on both visits there, so in the first of four ties against Athlone this season, John Caulfield’s charges were keen to lay down a marker, while keeping pace with the other promotion favourites. There was just a single change from the side that defeated Treaty United earlier in the week, with Jordan Adeyemo coming in for Stephen Walsh.

Meanwhile, there were a number of familiar faces in Martin Russell’s starting eleven, with Micheál Schlingerman, Stephen Kenny and Thomas Oluwa having all spent time in the maroon. And former fan favourite Carlton Ubaezuonu was among the substitutes.

Both sides traded chances early on, with Thomas Oluwa going close for Athlone. Oluwa was lively throughout the half, playing in a more central role than he enjoyed Corribside. Success Edogun spurned a number of half-chances. Schlingermann saved from Adeyemo at the opposite end.

Just before the half-hour, John Caulfield had to introduce Walsh earlier than envisaged, as a defender rather than his recent striking role, bringing him on to replace the injured Alex Murphy.

It looked like United had to take the lead after Wilson Waweru played in Adeyemo, but his shot was cleared off the line by Athlone’s new Dutch import Noah van Geenan.

Carlton came on just before the break, replacing the injured Derek Daly.

John Caulfield shook things up at half-time, with Manu Dimas coming on for Adeyemo, and Gary Boylan replacing Mikie Rowe. The changes had an immediate effect, with United starting to exert some control on the game.

On fifty-seven minutes, United finally made the breakthrough. Long throw specialist Killian Brouder launched a ball into the box from the left touchline, Dimas rose first to meet it, and his deft flick looped into the goal. There was genuine delight on Manu’s face as he sprinted to celebrate his first league goal with the sizeable contingent of travelling Galway fans.

And on sixty-six minutes, United repeated the move, albeit from the right-hand touchline. This time, Brouder’s throw was flicked on by Diego Portilla to Wilson Waweru, who had his back to goal. The young striker showed great presence of mind to set himself and backheel the ball goalwards, and Athlone were too slow to react. An early goal of the season contender from Willie.

Charlie Lyons replaced Portilla on seventy-four minutes, with the Spanish defender looking like he had picked up a knock.

Six minutes from time, Athlone pulled one back with the best move of the game. Oluwa played a ball in behind the Galway defence, Edogun raced in from the right to meet it and his finish was emphatic.

Cue a nervous few minutes as United sought to see out the game, while a revitalised Athlone pressed hard for an equaliser.

We changed our shape second-half because they were dangerous on the break.

Great for Manu. He got a fantastic header. Wilson with the back flick – we were comfortable, the game was over, we get caught and then out of nothing, it’s 2-1.

But to be fair to the lads, the concentration levels have been really good. It’s another three points, and in seven days, we have taken nine points out of nine and you have to be happy with that.

Our next fixture is away to Longford Town at Bishopsgate on Friday, March 26th at 7:45PM.
Our next home game is Cobh Ramblers on Friday, April 1st at 7:45PM.