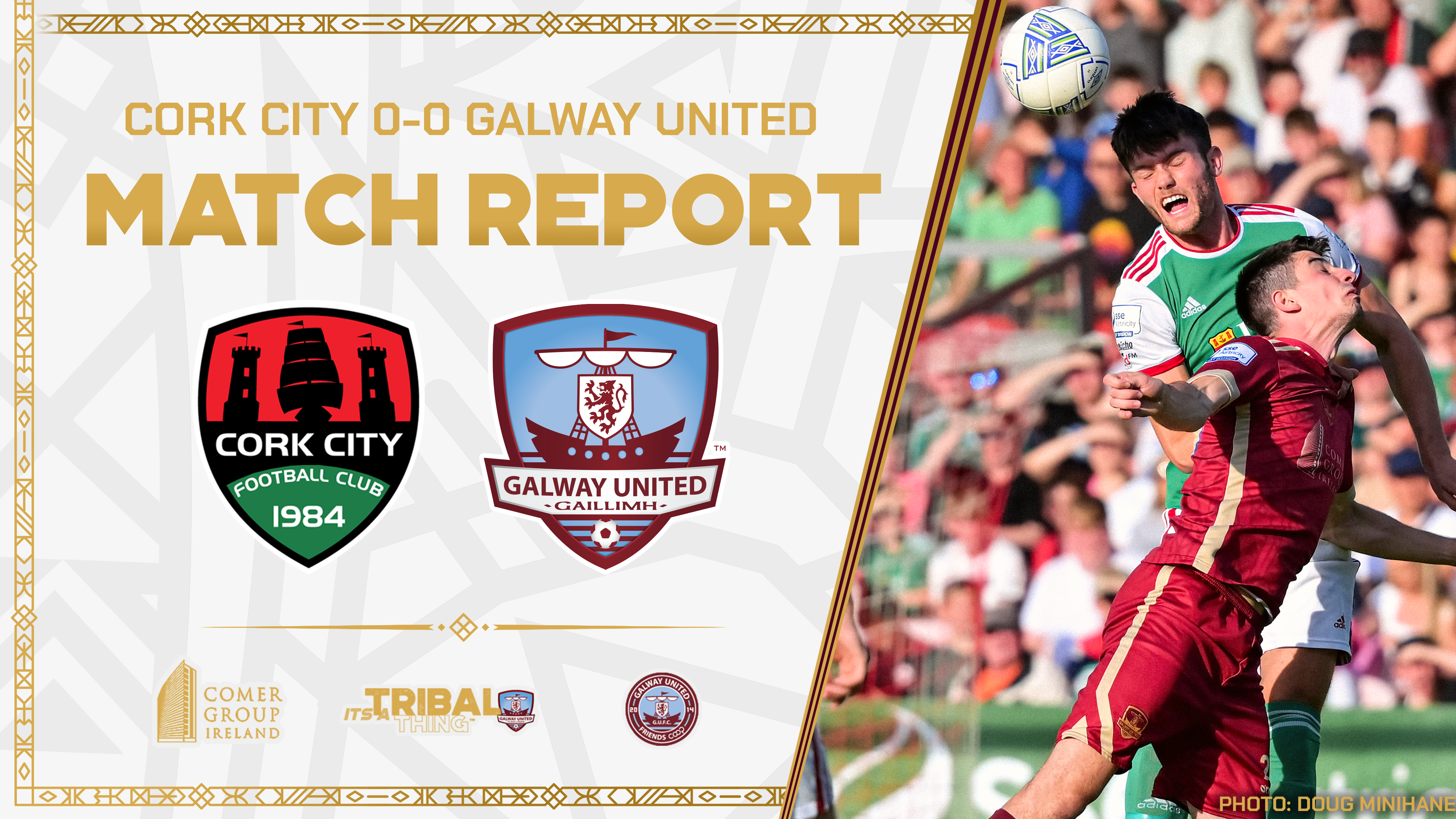 Ten-man Galway United produced a battling performance as they ground out a 0-0 draw against Cork City at Turners Cross on Friday night.

The Tribesmen showed spirit, grit and determination as they controlled large portions of the game, despite Ed McCarthy’s dismissal in the 15th minute.

As the game progressed The Rebel Army gradually assumed control in a bid to make their man advantage count. However, United held on until the final whistle to come away with a point.

John Caulfield made two changes to the team that started last Friday’s resounding 3-0 victory over Cobh Ramblers, with Max Hemmings returning to the side and new signing Rob Manley making his first start up front alongside Stephen Walsh.

The Tribesmen enjoyed an intense start as they relentlessly pressed the Cork backline in an attempt to secure an early opener, while David Hurley and Hemmings continuously asked questions of the home defence with a succession of dangerous crosses from deep.

Manley came close to opening the scoring in the sixth minute. A low driven shot by Walsh deflected off Cork defender Ally Gilchrist and fell into the former Bray man’s path, but his close-range effort was smothered by David Harrington in the home goal.

United continued to carve out openings, and could’ve had a penalty in the ninth minute when Hemmings went down in the area after being pulled back by Kevin O’Connor, but the referee was unmoved and waved play on.

The away side continued to control proceedings and looked more likely to score the opener, but the game flipped on its head as McCarthy was sent off in the 15th minute. The young midfielder was dismissed for a cynical foul on Cian Bargary in Cork’s half as the pacey opposition winger charged away on the break.

John Caulfield reacted to the dismissal by introducing Diego Portilla for Manu Dimas in the 22nd minute, and the added defensive solidity worked to good effect as United continued to assert themselves on the game despite the man disadvantage.

With a vocal home support pushing them on, City grew into the game in the closing stages of the first-half, but Colin Healy’s side were unable to carve out any opportunities of significance as the United defence held firm to send both sides in level at the interval.

The Rebel Army looked to make the extra man count in the early stages of the second-half, with the dangerous Dylan McGlade and Bargary attempting to tip the game in Cork’s favour with a series of dangerous crosses and shots from out wide.

Yet, it was United who had the half’s first big opening in the 59th minute. Conor McCormack, who was pivotal at both ends in what was a fantastic performance, found Charlie Lyons at the back post with an inch-perfect cross, but the centre-back’s header was tipped away spectacularly by substitute Cork ‘keeper Jimmy Corcoran to keep the scores level.

Galway continued to push in hopes of what would’ve been a crucial goal in the League of Ireland First Division title race, with their biggest chance coming in the 70th minute. In what was a frantic series of events, McCormack hit the crossbar directly from a corner before Walsh had a spectacular bicycle kick blocked when it looked destined for the Cork goal.

As the clock ticked towards full-time, City gradually began to assume control as the booming home crowd ramped up the noise behind the Galway goal. The home side came closest in the 80th minute when second-half substitute Barry Coffey fired a powerful first-time effort just wide from the edge of the box after a neat one-two with Cian Murphy.

United were forced to dig in as City created a succession of chances in the closing stages, with dangerous efforts from Murphy, Coffey, and Aaron Bolger all going close. Yet, The Tribesmen managed to hang on and travelled back to Galway with a point and a clean sheet.

The result sees United stay a point behind first-placed Cork City in the First Division standings, with Colin Healy’s side possessing a game in hand.

Next up, Galway United face Athlone Town away from home, with the game kicking off at 7:45pm local time.