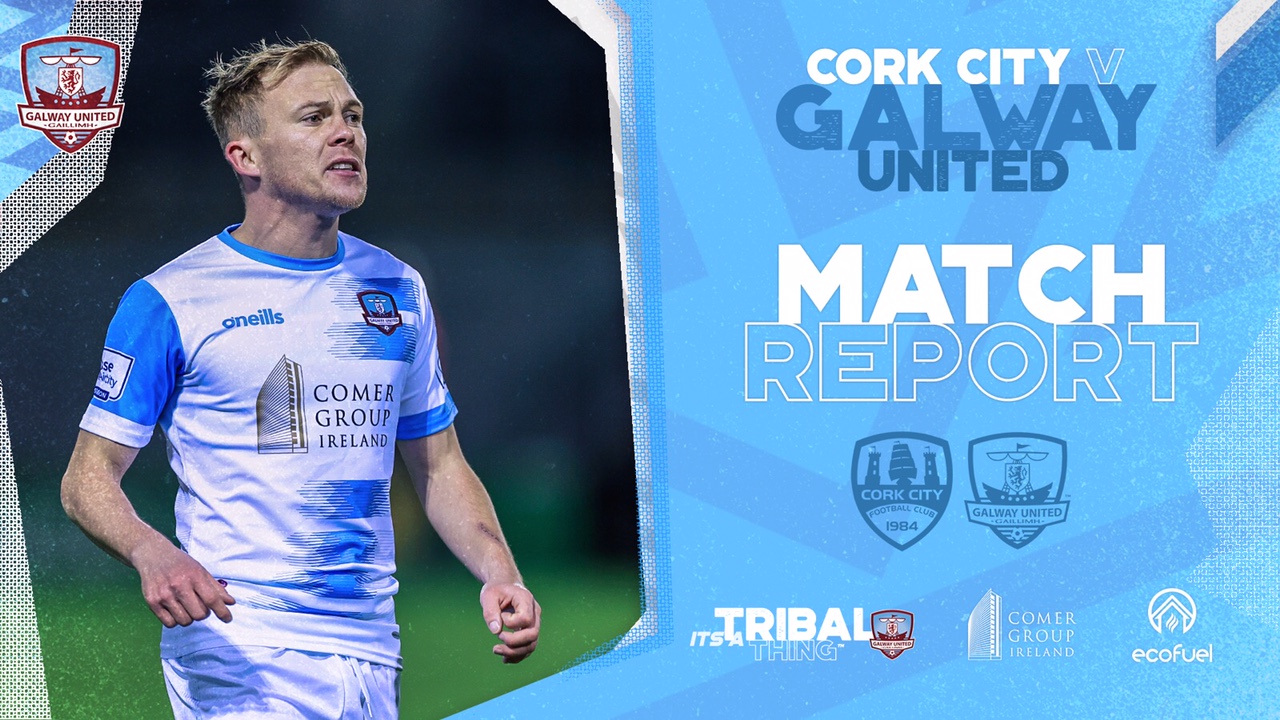 “I have said all along that there is a tremendous character in this team. We dealt very well with being a man down and the lads deserved the draw.” – John Caulfield, Manager

Galway United score late on to earn a 1-1 draw against Cork City at Turner’s Cross.

It was a cloudy evening down south as Cork City got the game underway at Turner’s Cross.

The match was evenly contested for the first ten minutes with both sides looking lively in attack from the get-go.

The first clear-cut chance of the game came the way of the home side in the 15th minute. Gearoid Morrissey dispossessed Conor McCormack in the middle of the park and passed the ball off to O’Brien-Whitmarsh in an attacking position. Whitmarsh slipped Cian Murphy in on goal but the attacker couldn’t hit the target as his strike went narrowly wide of Conor Kearns’ post.

After a spell of City pressure, United’s first opportunity came the way of Mikey Place in the 21st minute. Gary Boylan delivered an excellent ball into the box which fell to Place; the attacker struck a sweet volley towards Mark McNulty’s goal but the keeper did well to save his effort.

It was a tight ending to the half with both sides holding firm defensively. In a first period that lacked many clear-cut chances, David Hurley almost put United in front in the 40th minute. The midfielder’s strike from distance went inches wide of the post after the ball deflected off a City player, with keeper McNulty stranded.

From the following corner, there was controversy as referee Alan Carey made a significant call to send off United’s Stephen Walsh following lengthy discussions with his officials.

The teams went in level at half-time, with United down to ten men going into the second half.

United restarted the game after the break.

The Tribesmen had the first opportunity of the second period in the 54th minute. A long Killian Brouder throw landed on the head of Padraic Cunningham but the striker was unable to direct his header past McNulty.

Even with a man down, United were looking dangerous in attack and on set-pieces. Ubaezuonu had the ball in the net from an in-swinging Hurley free-kick in the 57th minute but the linesmen had his flag raised for offside.

It was becoming a feisty affair as the referee was dishing out cards all over the pitch, with City receiving four yellow cards in the space of ten minutes.

The match was on a knife-edge going into the final 20 minutes. Maurice Nugent did superbly to stop Dylan McGlade in his tracks as tensions were rising at Turner’s Cross.

Although United were coping well with ten men, City started to pile on the pressure late on in the game.

The deadlock was broken in the 81st minute when Jack Baxter scored an impressive long-range volley to put City in the lead. The ball fell to the on-loan Preston North End man outside the box and he finished emphatically into the bottom corner to make it 1-0.

John Caulfield’s side never gave in and their hard work paid off at the end of the game as United scored another late goal to secure a point away from home. Brouder launched a cross into the box and the ball fell to Boylan at the back post. The defender lifted the ball back into a dangerous area which landed on the head of Nugent who struck a bullet header past McNulty in the 91st minute to snatch a 1-1 draw for the Tribesmen.

“I have said all along that there is a tremendous character in this team. We dealt very well with being a man down and the lads deserved the draw.

“The players worked their socks off and showed great attitude and great spirit. Maybe the team need a bit more belief in themselves as they have a lot of quality.

“It was a very peculiar game, it looked like a night we weren’t going to get a result but the lads kept going and got a fantastic equaliser so it is a great point under the circumstances.

“I have to look back on the red card as it was frustrating. The most important thing is that the lads got the goal at the end and earned us the draw.

“We go to Shelbourne next week which will be another tough game.”

Our next First Division game is away to Shelbourne on May 28th.