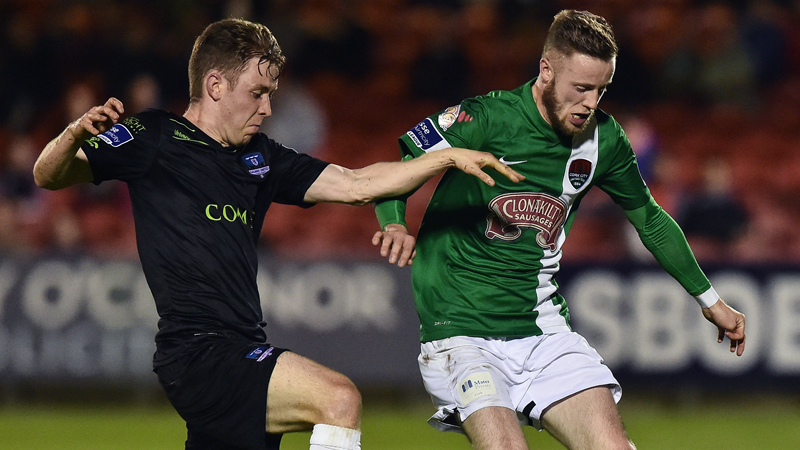 A first half in Turner’s Cross during which Cork City put four past Galway United ultimately settled the affair as a vastly improved second half performance was insufficient to claw back the handicap Tommy Dunne’s men had set themselves.

Just seconds into the encounter Sean Maguire chased down a ball that Conor Winn had to be quick to meet at the edge of the box. The resulting rebound off the striker looped in the general direction of the goal, but it went harmlessly wide.

Six minutes in, the hosts took the lead. Kevin O’Connor’s corner kick wasn’t claimed by Conor Winn and David Mulcahy shot through a crowd of players from close range to open the scoring.

Sustained pressure followed from Cork, as they used the width of the pitch to pen United in, firing off a number of warning shots in the process.

Ten minutes from half-time the Tribesmen pulled a goal back. A rare attack from United was stopped in it’s tracks when Ryan Connolly’s was fouled outside the angle of the box. The resulting free was swung in by Connolly himself before being met by the head of Kilian Cantwell who nodded it past Mark McNulty.

John Caulfield’s men reacted to the goal by restoring their two goal lead within as many minutes.

Loss of concentration in midfield saw Cork win possession before breaking at United. Karl Sheppard crossed in for a grateful Garry Buckley who headed home.

With the break fast approaching, Conor Winn had to be sharp to deny Stephen Dooley’s low drive, but he could do nothing as David Mulcahy added a fourth for City at the back post a short time later.

The second half began with a considerable improvement from Tommy Dunne’s men.

Gary Shanahan had a chance on 57 minutes when he got on the end of a Marc Ludden cross, but McNulty saved at his near post.

On the half hour, a Mulcahy slip allowed Vinny Faherty to advance up the left before crossing to Devaney who hit a first time time shot that was always going wide.

Kevin Devaney who had been a live wire since his introduction at half time pulled a second goal back for United as the halfway point of the second half approached. He controlled the ball and steadied himself before firing it cooly to the right of McNulty into the corner, in a move he himself instigated.

Minutes later, Cork were three goals up once again. A Kevin O’Connor free kick from a central position took a wicked deflection on its way through the wall, leaving Conor Winn completely stranded.

Shortly after being introduced, Enda Curran almost met a cross with his head in front of goal, but it was just out of reach.

Soon after, Curran had McNulty at full-stretch to deny the United striker from a free kick.

Just before the final whistle, Kevin Devaney capped an excellent individual second half performance with a second goal. The winger made a fantastic run leaving defenders in his wake before blasting confidently past a helpless McNulty.