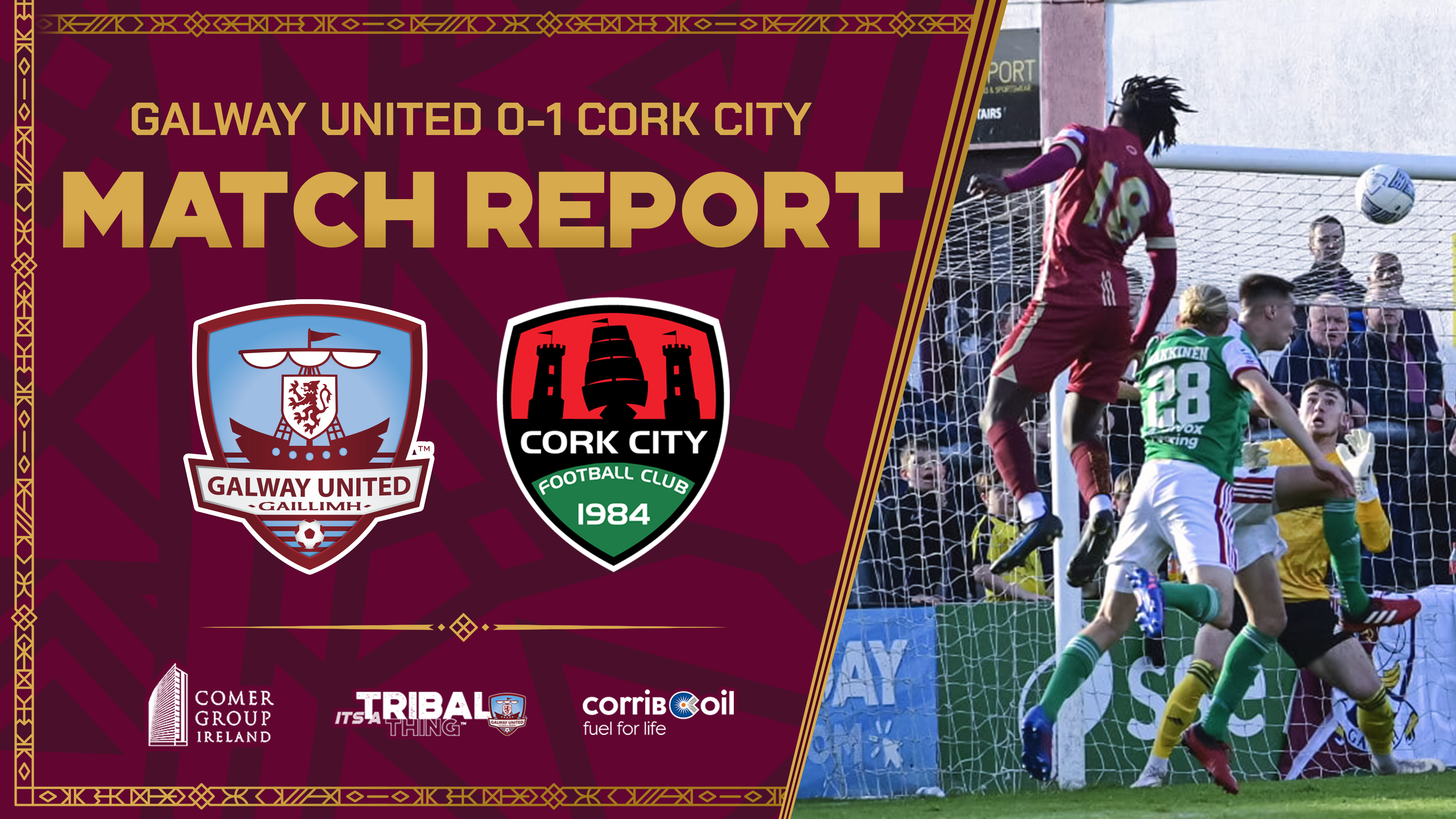 John Caulfield named an unchanged side after last week’s resounding 3-0 victory against Athlone Town, with The Tribesmen seeking a club record breaking eighth successive victory in front of a bumper crowd in Terryland.

It wasn’t to be however, as Cork took an early lead, and despite United’s best efforts, The Rebel Army held out for the victory despite a nervy finish after Ruairi Keating’s red card in the 67th minute.

The home side enjoyed a bright start, with several early chances falling their way. Two dangerous corners by David Hurley carved out openings for both Gary Boylan and Alex Murphy, but neither player could hit the target.

Galway were soon made to rue those misses as City took the lead in the 17th minute. It was a moment of brilliance from Matt Healy, who controlled a pass from 25 yards out, cut onto his right foot, and curled a ferocious effort into the top right corner to send the away crowd into raptures.

The momentum swung in Cork’s favour following the opener as they looked to extend their lead. However, United came agonisingly close to drawing level as Wilson Waweru was denied by a spectacular save by away ‘keeper David Harrington before Murphy’s follow up was cleared off the line by Josh Honohan.

United continued to utilise Waweru’s aerial threat and could’ve had a leveller on the stroke of half-time. A brilliant cross by Max Hemmings found the young striker at the back post, but his effort flew just wide as United went in behind at the interval.

The Tribesmen continued to push following the break. The half-time introduction of Manu Dimas added extra firepower to the attack, but clear-cut opportunities were at a premium as The Rebel Army settled on preserving their lead.

The dismissal of City’s Ruairi Keating in the 67th minute did little to alter their gameplan. The ex-United man was shown a straight red card for an off-the-ball altercation with Diego Portilla, vaporising their attacking threat as they focused on seeing the game out.

Following Keating’s dismissal, John Caulfield turned to his bench and introduced a string of attack-minded players as his side chased an equaliser. Ronan Manning and Conor O’Keeffe both asked questions of the away side, but like the rest of the United side on the night, they were unable to alter the course of the game.

The away side ultimately held on until the final whistle and returned to Cork with the three points.

“It’s a disappointing result for us, but at the same time there’s a long way to go.

Maybe the sending off helped them in some ways in the sense that they decided to put everyone behind the ball, and it became difficult for us to break them down.

These are a good bunch of lads, and they tried their hardest tonight. They gave everything, so we’ll take our break, and we’ll move on after the break.”

The defeat sees United fall a point behind Cork City at the top of the table at the halfway stage of the season.

Following the division’s two week break, Galway will travel to Bray on June 17th , while our next home game is against Treaty United on June 24th.