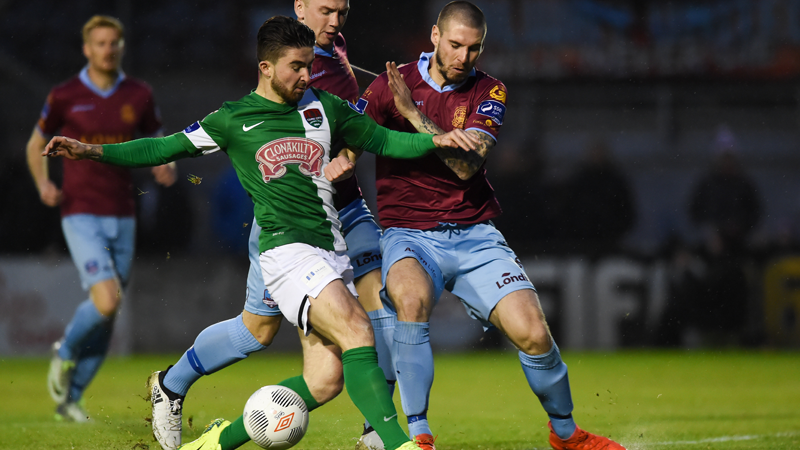 Galway United were powerless to resist an early blitz from John Caulfield’s men from which they never recovered, eventually succumbing to heavy defeat on a wet night at Eamonn Deacy Park.

Cork City raced into an early lead, with barely two minutes on the clock. Karl Sheppard advanced into the box before squaring a cross for Sean Maguire, who dived to head beyond the helpless Ramsbottom

Stephen Walsh had to be sharp to clear the danger from Maguire and later Ramsbottom needed a second attempt to hold on to a dangerous Cork City cross.

Carrying on from where he left off in the second half against Cork in Turner’s Cross recently, Kevin Devaney had a run at the City defence, beating two defenders and crossing into the box, but it was well read by Mark McNulty in the Leesiders’ goal.

Cork doubled their lead on the quarter-hour mark. Good work on the right saw Karl Sheppard find space to cross for Stephen Dolley, who stroked the ball home from the edge of the box.

On 19 minutes, Karl Sheppard made it a hattrick of assists against his former club, when he supplied another crossed from the right, that was met by the head Garry Buckley in the six yard box.

Enda Curran made an advance up the right and looked to be switching the ball to Kevin Devaney, but he instead tried his luck from distance in an effort to catch the ‘keeper off his line, but it was off target.

Sam Ramsbottom needed to put a fist to a Steven Beattie cross that dropped dangerously under his crossbar.

The second half was only a few minutes old when the visitors scored again. Gavan Holohan threaded a ball through to Sean Maguire, and the in-form striker slotted into the far left corner of the net.

Ten minutes into the second half, Ryan Connolly tried to curl one past McNulty having been short of options, but it was saved comfortably. Connolly saw another attempt drift wide into the side-netting.

Connolly tried once again to beat McNulty, but the low shot was well saved.

Substitute Chiedozie Ogbene capped a woeful night for the Tribesmen when Karl Sheppard, who tormented United all night, squared for the his fellow Cork City attacker to make it five on the night.

Next up for United is a trip to Wexford Youths on Friday, 14th October, 8.00pm kick-off, at Ferrycarrig Park.