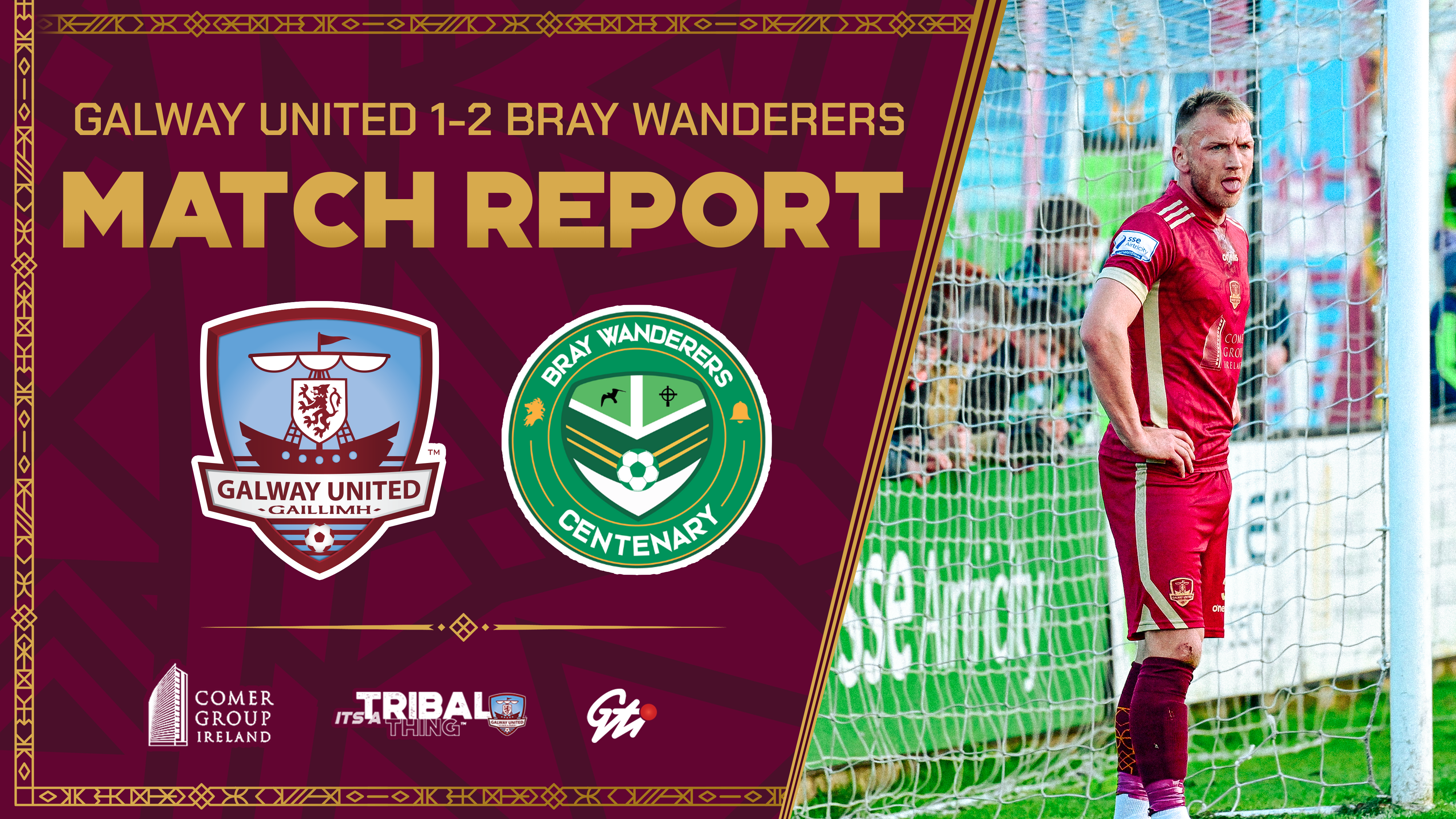 Galway United suffered a 2-1 defeat to a well organised Bray Wanderers side at Eamonn Deacy Park on Friday Night.

The Tribesmen grew back into the game in the second-half, especially after Zach Donohue received two bookings in quick succession to put Bray down to ten men with six minutes of injury time to play. A late Ronan Manning penalty gave John Caulfield’s side a glimmer of hope going into the final few minutes, but it ultimately wasn’t to be for United.

John Caulfield made two changes to the side that suffered a last-gasp defeat away to Waterford last Friday, with Francely Lomboto and Oisin O’Reilly coming in for Diego Portilla and suspended captain Conor McCormack.

The Tribesmen made a fast start to the game, and won an early penalty after Jamie Hollywood fouled Rob Manley in the second minute. Hurley stepped up to take the penalty, but his effort to the left side was equally matched by Bray keeper Stephen McGuinness.

Moments later, Bray took the lead through Feeney. A cross from Jack Hudson found Hugh Douglas whose scooped pass was met by the darting run of Feeney as he beat the offside trap and forced the ball low into the Galway net.

Kelly doubled Bray’s lead in the 28th minute. A long-ball dropped to Feeney, who spun away from his marker and put the former United man through on goal to slot his effort past Conor Kearns.

The Tribesmen were stunned by the second concession, but had several opportunities to claw a goal back before half-time through efforts from Stephen Walsh, Manley and Hurley which went close.

With three sets of fresh legs on the field, the wounded home side cranked up the pressure following the break as they pinned the away side back. However, Bray’s defence repelled everything United threw at them as they looked content to sit in and protect their advantage.

With Galway still in search of a goal, Caulfield turned to the bench again in the 69th minute and introduced Mikie Rowe and the returning Manning for O’Reilly and Max Hemmings.

Manning almost had an instant impact just seconds after being introduced. A goalmouth scramble in the Bray area saw the attacker have two close-range shots on goal, the latter of which was turned behind for a corner.

It was getting into the do-or-die stage for the Tribesmen as an Adam Thomas shot was tipped onto the post by McGuinness and out for a corner. The resulting corner was met by the head of James Finnerty, whose effort also cannoned off the post.

United were given fresh hope of a comeback in the 88th minute as Bray went down to ten men when Zach Donohue was dismissed for a second bookable offence. The Seagulls defender, who had received his first booking just two minutes before, received his marching orders after hacking down Manning on the edge of the area.

United were awarded their second penalty of the game in the 90th minute and up-stepped Manning to convert the spot kick and give The Tribesmen a glimmer of hope going into six minutes of added time.

Yet, despite winning several corners in the dying moments and hitting the side-netting through Walsh, the home side could not find an equaliser as the game ultimately ended in defeat.

The result sees The Tribesmen stay second, seven points behind Cork City in the First Division standings after 26 games played. Waterford sit third, five points behind United with a game in hand.

Next up, Galway United face UCD in the Extra.ie FAI Cup at Eamonn Deacy Park on Friday, August 26. Kick off is at 7:45pm local time.