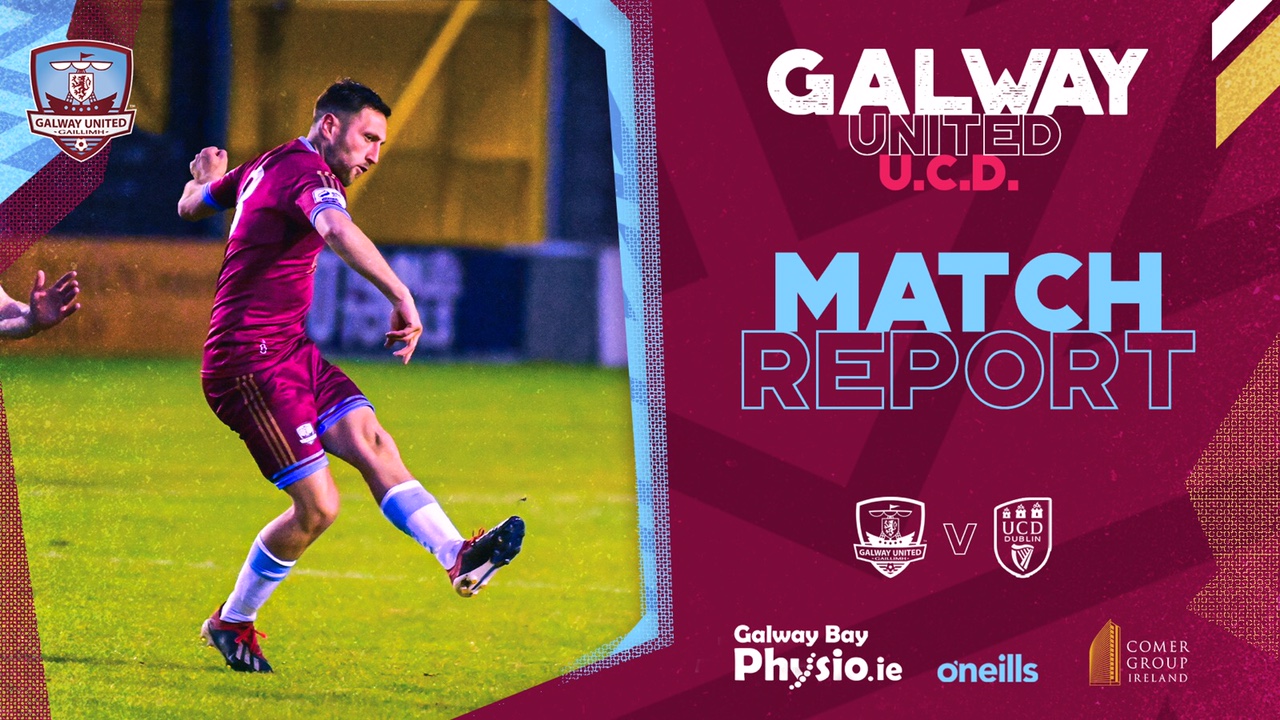 “The lads made an impact again off the bench to get the draw. I can’t speak highly enough of the attitude and character of the players. It’s been two weeks in a row we have been down late in the game but we pulled it back against a strong team.” – John Caulfield, Manager

The sun was shining on Corribside as United got the game underway on a pristine Eamonn Deacy Park pitch.

After an evenly contested opening ten minutes, the first chance of the game came the way of United in the 15th minute. UCD goalkeeper Lorcan Healy headed the ball clear which fell to Shane Duggan outside the box, but the midfielder was unable to find the net from distance.

A few minutes later, UCD’s first chance of the game came the way of Liam Kerrigan but his speculative effort from outside the area was well saved by Conor Kearns.

It was a much stronger start from the Tribesmen this week and Ronan Manning almost put United in the lead in the 22nd minute. David Hurley’s in-swinging cross landed to Manning inside the area but UCD were able to clear his effort off the line to prevent the home side from taking the lead.

Ruairi Keating was looking lively upfront from the get-go and had two opportunities in the space of five minutes. The attacker was sent in behind the UCD backline by Gary Boylan in the 25th minute but his strike wasn’t powerful enough to test Healy. A few minutes later, Keating was denied again by the UCD keeper after a pin-point cross from Christopher Horgan.

Right on the stroke of half-time, Colm Whelan put UCD in front against the run of play. The inform striker headed past Kearns to give the students the lead. The Tribesmen 1-0 down at the break.

The visitors got the game back underway in the second half.

United were quick out of the blocks after the half-time break and equalised in the 47th minute. Keating blasted the ball into an empty net after Maurice Nugent’s header rebounded off the post into the striker’s path.

John Caulfield’s side continued with high intensity, in search of a second goal. Hurley hit a venomous strike from distance in the 62nd minute but Healy was able to save his attempt low down.

After United were unable to clear a corner in the 71st minute, Harvey O’Brien put UCD back in front after getting a touch on Kerrigan’s in-swinging cross.

Three minutes later, Keating almost pulled the Tribesmen level but once again Healy stopped the forward’s strike at his near post.

United pressed for an equaliser and pushed players forward towards the end. The pressure reaped the reward as substitute Padraic Cunnigham brought United level with a header in the 88th minute after a fantastic long throw from Killian Brouder.

It was an end to end finish as both sides hunted for a winner but it remained level at the full-time whistle. United came from behind twice to earn a point.

“We are trying to stop going behind in games but the lads showed incredible character tonight, coming back from the first UCD goal but in particular the second goal. We are conceding a few soft goals at the moment but the team battled back well after being twice behind.

“It was a very even game and there wasn’t much between the two sides. I thought we were in the ascendency in the second half but the second UCD goal was a killer blow.

“The lads made an impact again off the bench to get the draw. I can’t speak highly enough of the attitude and character of the players. It’s been two weeks in a row we have been down late in the game but we pulled it back against a strong team.

“Overall, I didn’t think there was anything wrong with the performance, we just gave away two soft goals. It is a long way to go, we go to Cobh next week and we will prepare for that game.”

Our next First Division game is away to Cobh Ramblers on May 1st.