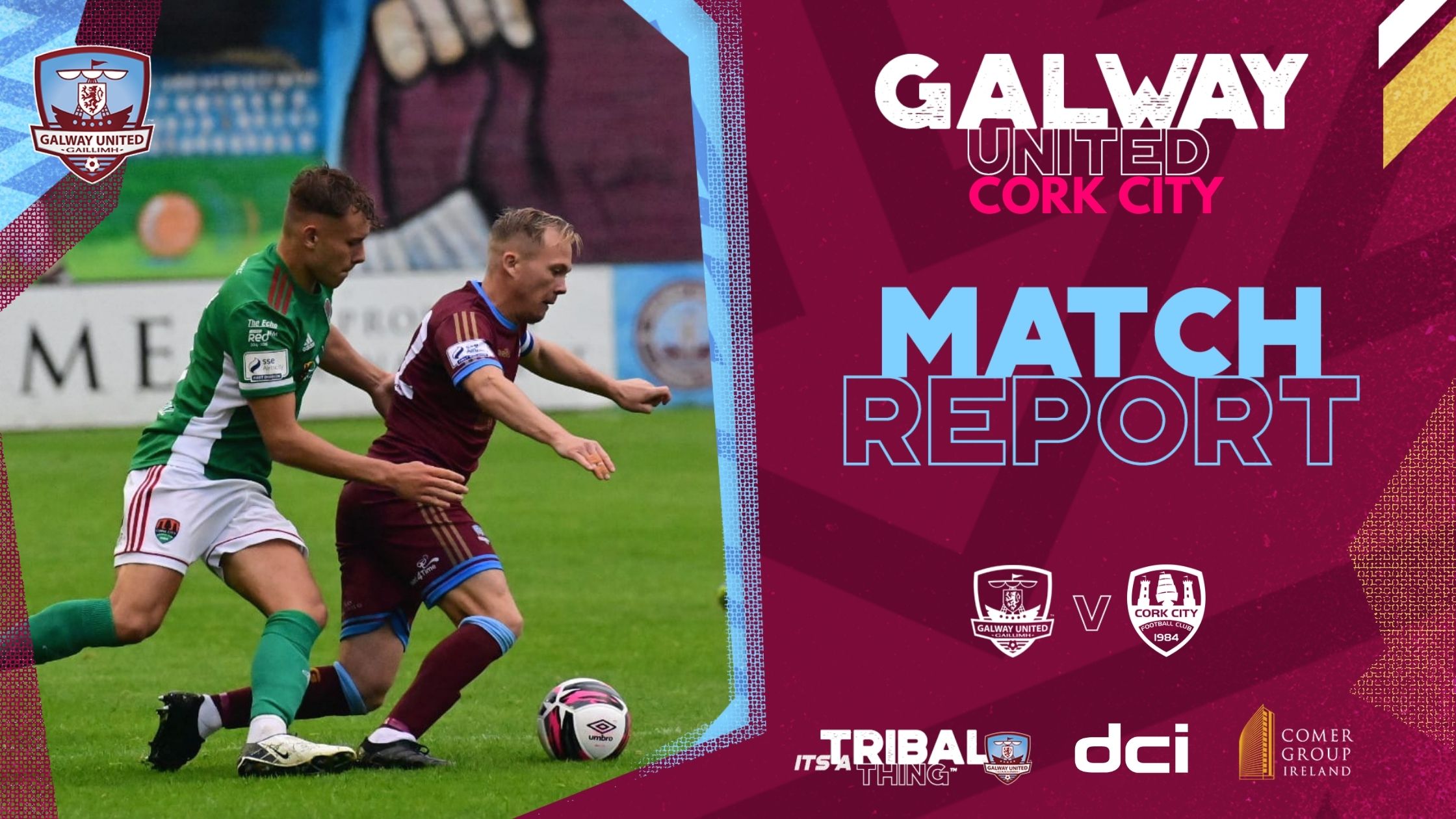 “They were always dangerous on the counter-attack and they caught us for a sucker punch.” – John Caulfield, Manager

800 fans were welcomed back to the grounds for the first time in over a year as Galway United faced Cork City on Corribside.

It was a fast opening to proceedings as the ball skimmed across a wet Eamonn Deacy Park surface, with both attacks looking lively from the get-go.

The Tribesmen came the closest to opening the scoring in the seventh minute as the crowd urged the home side on with every attack. David Hurley and Conor McCormack manufactured a quick free-kick that resulted in McCormack delivering a teasing ball into the box which landed on the head of Wilson Waweru but his attempt was well saved by City keeper Mark McNulty.

Both sides continued to look threatening in the final third of the pitch and the opening goal duly came in the 15th minute. Dylan McGlade, who was City’s best player from the beginning of the match, struck a shot from outside the area which was bound for the bottom corner once he hit it, leaving Conor Kearns with little chance as the ball skipped along the wet surface.

United fought back straight away. Waweru came close with a header before his hard work eventually paid off. Killian Brouder launched a long throw into the penalty area which landed on the head of Waweru and this time McNulty was unable to save the striker’s header as he levelled affairs in the 24th minute.

The game was now an end-to-end frenzy and City responded like a flash to United’s goal. Darragh Crowley latched onto a palmed clearance from Kearns and made no mistake as he finished into an empty net to regain the Rebel Army’s lead in the 26th minute.

City continued to look dangerous and once again it was that man again McGlade who raced down the left wing and set up Cian Murphy in the box but the attacker was unable to hit the target.

United created a few chances before the break as they hunted for an equaliser. Hurley came close with a strike inside the area destined for the back of the net but McNulty produced an outstanding save; the home crowd now anticipating a goal was imminent.

John Caulfield’s outfit continued to bombard City’s goal and a deserving leveller came in the 41st minute. Brouder made it two goals in two weeks as he got the final touch on a McCormack corner to make it 2-2 in a frantic first period.

It was a second half that lacked as many chances as the first but Brouder did hit the net once again in the 54th minute but the referee adjudged a United player of fouling McNulty from a corner.

The match became a scrappier affair as the game progressed, with both sides fighting for every ball.

The best clear-cut chance of the second half came in the 71st minute when substitute Shane Doherty weaved his way past a Cork defender and tested McNulty who spilt the ball in the direction of Ruairi Keating but the attacker was unable to find a way through the onrushing keeper.

With the game on a knife-edge, man of the match McGlade, who still looked menacing in attack, created the killer blow in this game in the 78th minute. The ever-threatening McGlade sent Gordon Walker down the right wing and the full-back picked out Sean Kennedy in the box who hit a low struck shot past Kearns to give City the lead.

United searched for an equaliser before the final whistle but it wasn’t to be as City kept their advantage as the referee blew the full-time whistle.

“It was a cracking game, it was a real good atmosphere but we are disappointed with the result. It was a very tight game, we had the chances, but we conceded a few soft goals.

“We would have liked to have won for the crowd so it was disappointing on that front. They were always dangerous on the counter-attack and they caught us for a sucker punch.

“We go back in tomorrow and work for next week; anyone can beat anyone in this league. The playoff spots will go down to the wire so we have to try and bounce back next week.”

Our next First Division game is home to Shelbourne on August 13th.