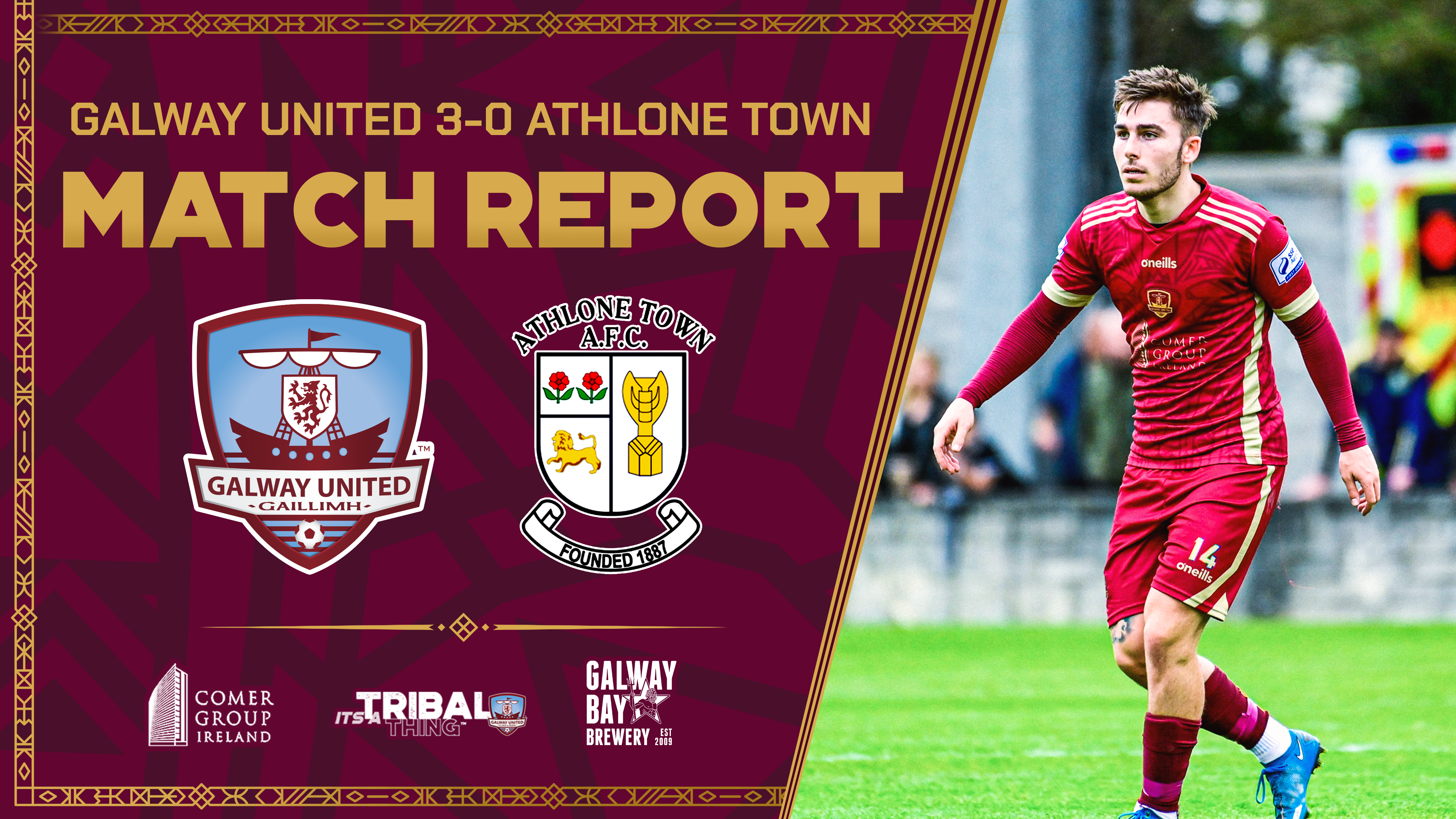 Galway United made it seven wins in a row after beating Athlone Town 3-0 at Eamonn Deacy Park on Friday night.

Three second-half goals were the difference for John Caulfield’s side, with Alex Murphy’s header being followed by late strikes from David Hurley and Ronan Manning.

Despite their struggles this campaign, Athlone enjoyed a bright start. The Town had the game’s first chance with Gary Armstrong drawing Conor Kearns into a fine save with just four minutes gone.

However, United gradually gained a foothold with several early half-chances for Stephen Walsh and Gary Boylan going astray. The pick of the bunch was a long-range effort by Boylan, which took a couple of deflections before falling safely into the arms of Athlone ‘keeper Mark Smith.

The game’s first major talking point occurred when United had a penalty shout in the 21st minute. Max Hemmings played a neat one-two with Wilson Waweru before going down in the area under challenge by Aaron McBride, but the referee was unmoved and waved play on.

The first-half remained a cagey affair thereafter, but United were presented with an opportunity to take the lead on the stroke of half-time. A brilliant cross by Hemmings fell to Killian Brouder on the penalty spot, but his volleyed effort rolled harmlessly wide and both teams went in level at the interval.

The Tribesmen came within inches of taking the lead straight after the break. Waweru raced past the Athlone defence and found himself with just the keeper to beat after latching onto a Boylan pass, but his effort was spectacularly tipped onto the crossbar by Smith.

John Caulfield’s side finally took the lead just minutes later from a free kick out wide. Hurley was the one to take, and his driven cross found Murphy, who nodded home at the front post after beating his marker.

After hitting the opener, The Tribesmen assumed control of proceedings as they looked to turn the screw. Walsh and Waweru both went close several times with headers from corners, but neither forward could find the net despite causing chaos in the Athlone defence all evening.

The pair showcased their effectiveness to win United a penalty in the 79th minute. After a neat exchange in midfield, Waweru was put through on goal by Edward McCarthy, and although Smith stopped the striker’s effort, the ball fell to Walsh, who was brought down in the box with the goal at his mercy.

After converting all of his penalties so far this season, Hurley was the man to step up, and he smashed home the spot-kick to double United’s lead and notch his fifth goal of the campaign.

Substitute Ronan Manning hit a third in the 89th minute to add some gloss to the scoreline. Captain Conor McCormack played a wide free-kick into his path on the edge of the area, and the Galway native hit a low driven effort into the bottom left corner to seal the victory for United.

The result extends The Tribesmen’s winning run to seven games and puts them top of the table ahead of next Friday’s crucial game against Cork City at Eamonn Deacy Park.

Next up, Galway United take on Cork City at Eamonn Deacy Park on Friday May 27th.