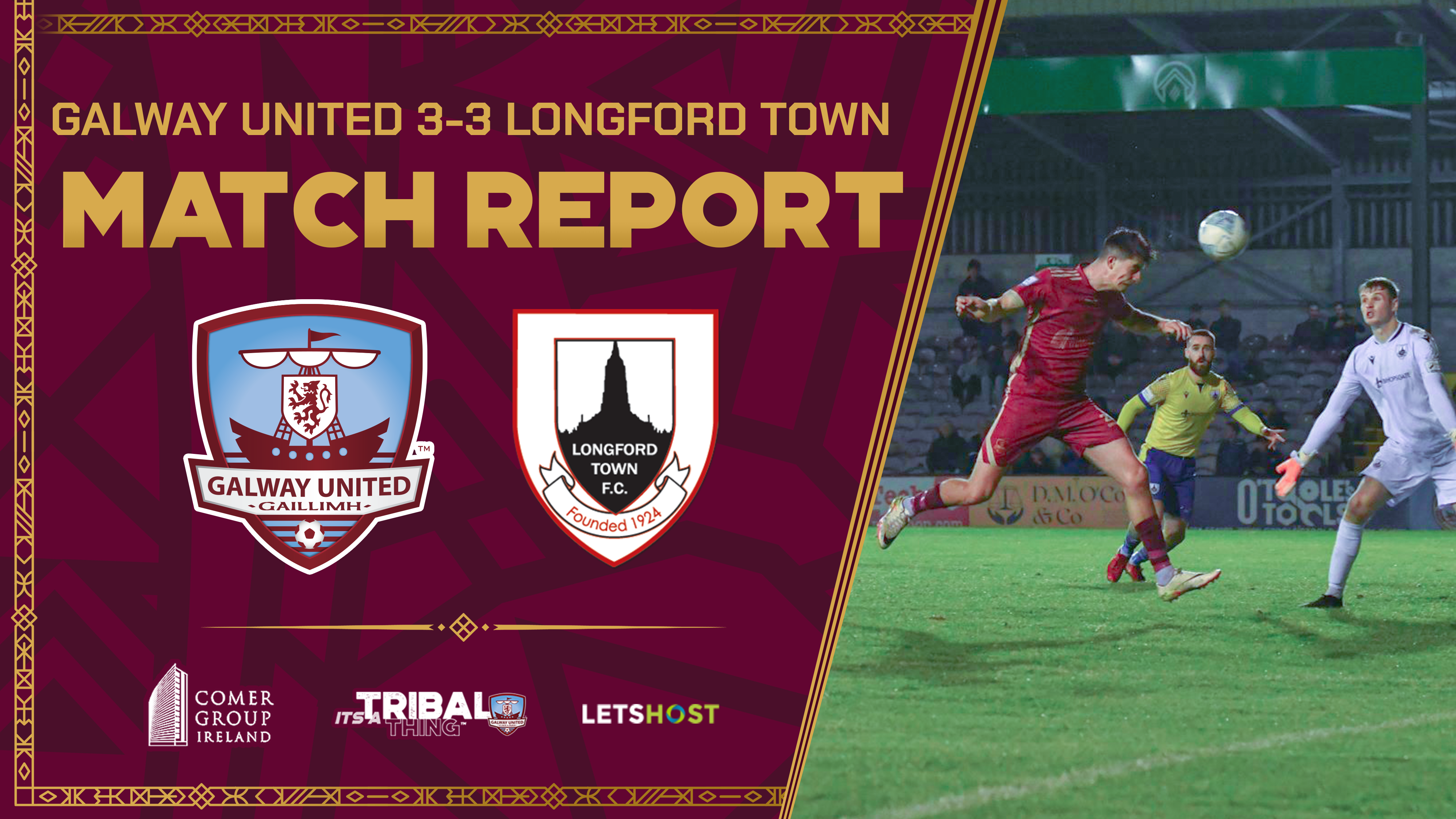 An inspired second half comeback from Galway United proved crucial in a six-goal thriller in their last league appearance of the season on Friday night.

After having a two-goal deficit at the break, United overcame a tricky Longford Town side to secure third position in the SSE Airtricity First Division, following a 3-3 draw at Eamonn Deacy Park.

With nine changes made to John Caulfield’s starting eleven, the Tribesmen took to the field on a wet Friday night.

Longford responded by taking the lead on seven minutes, with Adam Verdon’s crossfield pass finding Darren Clarke on the right flank, who drove at Adam Thomas before cutting back onto his right foot and made no mistake finishing into the far corner.

The game opened up over the next ten minutes, with both teams enjoying spells of possession and a few half-chances. Longford particularly found joy with Clarke, who posed numerous problems for the United defence, but the Tribesmen stood firm and dealt with the danger.

United refused to sit back and launched an attack of their own in the 19th minute. Manu Dimas expertly plucked the ball out of the sky before the ball worked its way to David Hurley, who demonstrated some impressive footwork to beat three Longford defenders before his cross floated over the bar for a goal kick.

United earned themselves a succession of corners in the 25th minute, Dimas showed excellent control again before laying the ball off Evan O’Connor, but his cross was blocked.

Longford looked nervy under United’s deep, in-swinging corners, and the next set-piece put the home side level as O’Connor nodded Mikie Rowe’s cross into the back of the net.

Longford went close again on the half-hour mark, Clarke combined with Joe Power who attempted to flick the ball into Cristian Magerusan’s path, but Kearns did enough to see the ball roll out of play.

Manley then went close after Dimas picked up a loose ball, but his lofted attempt from the edge of the box was just too high. Soon after, another poor Longford pass resulted in Waweru being played through and taken down, but referee Paul Norton waved on.

Magerusan found himself one-on-one with Kearns ten minutes before the interval and drew the Galway shot stopper into an unbelievable save. However, Matthew O’Brien tapped the rebound in to put the visitors ahead.

Longford were not finished there, as three minutes into additional time they went 3-1 up as  Magerusan’s header deflected into the back of the net via a United body.

United responded immediately after the restart, with Manley bundling the ball home with just eighteen seconds played. Moments later, Rowe almost brought it level after hia thunderous free-kick was parried away by Cox.

Although the game remained very back-and-forth, United seemed inspired in attack, while a spate of changes altered the course of the game for both sides.

The Tribesmen pinned Longford back with sustained attacking play for a lot of the second half, with debutants Mikey McCullough, Aaron Neary, and Steven Healy coming off the bench to aid in United’s search for a winner.

The Tribesmen’s academy graduates looked impressive as the home side maintained pressure, and with ten minutes left on the clock, Caulfield’s decision proved to be a good one. O’Connor’s cross found Manley at the front post and his headed effort left Cox with no chance to draw the hosts level.

The dying minutes saw United drive for a winner, with multiple penalty shouts and goal line scrambles leaving spectators on the edge of their seats, but the game ended 3-3, much to the relief of the visitors.

Next up, Galway United will face Longford Town in the first-leg of the SSE Airtricity promotion playoffs at Bishopsgate on Wednesday, October 26th, at 7:45pm.

AWAY TICKETS can be purchased, while the Co-Op will also be running a SUPPORTERS BUS to and from the game.

The second-leg will take place in Eamonn Deacy Park on Sunday, October 30th, at 4pm.