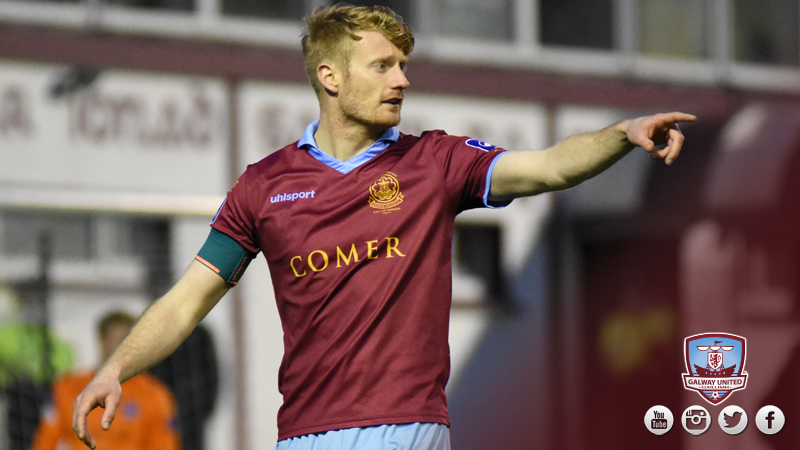 Galway United came from behind with an improved second half performance to garner a point at City Calling Stadium in Longford tonight, after a falling behind early in the second half following an indifferent opening.

Five minutes into the match, some decent play from United in the Longford half ended in a shot from Ryan Connolly that was dragged wide.

A few minutes later, Don Cowan had a chance, having been played through behind Armin Aganović, but his shot cannoned off Galway United ‘keeper Conor Winn.

Peter McGlynn played a dangerous ball into the the box as he advanced towards the box from the corner that had to be cleared at the back post for a corner, but the resulting set-piece came to nothing.

Don Cowan almost had a chance in the United six yard box after a Kealan Dillon free, but Stephen Walsh made the all important intervention.

Twenty minutes in, Gary Shanahan got in behind the Longford Town defence before being clipped by Conor Powell as they crossed paths, earning the Longford defender a booking. Ryan Connolly took the resulting free kick, but it was hit with too much height to trouble the home goal.

Mark Hughes almost set up Noel Haverty in the box, but despite his acrobatics, his effort was always rising.

United were lucky to not to concede when Eddie Dsane smashed the ball off the corner of the upright following Rhys Gorman’s free-kick that was flicked on by Yann Mvita. Longford had another chance soon after, but Don Cowan blasted wide.

Before the break in a half which was dominated by Tony Cousins’ men, Kevin Devaney beat Noel Haverty to the ball and he drilled it across goal, but Ryan Coulter was equal to it.

United made a chance out of nothing when a ricochet found its way into the box with Gary Shanahan chasing, but Longford ‘keeper Ryan Coulter did brilliantly to get out to smother the shot from Shanahan, before it was eventually cleared.

Almost ten minutes into the second half, Longford hit the front. Noel Haverty crossed into the danger area and it was met by the volley of Kaleen Simon who smashed past Conor Winn.

Approaching the hour mark, United had a great change to restore parity, when Marc Ludden’s long throw had the home side at sixes and sevens in the box. The ball fell to Conor Melody, but his scuffed shot wasn’t able to beat Coulter.

Halfway through the second half, the Tribesmen drew level. Kevin Devaney was taken down on the edge of the box. The resulting free was taken by Ryan Connolly. With a crowded penalty area expecting a cross into the box, the Galway United captain cleverly set up Paul SInnott on the edge of the area, who shot powerfully through a sea of bodies to even things up.

In the final twenty minutes the game opened up significantly. Vinny Faherty drew a fine save out of Coulter when he headed Marc Ludden’s cross goalward.

Conor Winn showed excellent reaction on 76 minutes when he denied Yann Mvita, sweeping the ball away with his feet. At the other end, Faherty was on the end of a Devaney corner, which Coulter saved with feet.

Lee Duffy had a chance saved by Conor Winn in the dying moments but it ended honours even, as United now look towards a big home clash with Dundalk, who play their first league game in a month.